Posted in: The Reel World by Archive Authors on November 15th, 2013 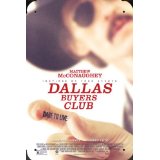 In 1986, AIDS was all over the headlines. Now AIDS is forgotten and ignored by most, but the pandemic remains a world wide disaster. It’s not like syphilis is all over the news either, but AIDS is both an insidious killer and one with a stigma all its own. Aside from the stigma is the world wide spread of HIV (the precursor to AIDS) which had reached 34 million people by 2010. Across the world, the majority of new infections are male to female. Modern pornography is exponentially more available than it has ever been and does nothing to promote safe sex, and condom use is still something that has strong opponents in society.

It’s good for a movie like Dallas Buyers Club to come along to reacquaint a new generation to the terrors that AIDS brought to a previous generation. Dallas Buyer’s Club is based on a true story about rodeo electrician, hard drinking gambler and rampant heterosexual Ron Woodroof. After an electrical accident sends him to the hospital, he is told that he has 30 days to live. It is impossible for Ron to comprehend how he could have the “gay” disease since his sexuality is heterosexual to the extreme.

Matthew McConaughey has made a radical career shift recently, and it is likely that he will receive two Oscar nominations this year: Best Supporting Actor for Mud and Best Actor for Dallas Buyer’s Club. He will likely win Best Actor because the performance is that startlingly transformative. Not only is he amazing in showing the range of anger, charm and anguish as he fights through hopelessness to achieve some sense of defiance to the disease, but McConaughey also makes the physical transformation that has become the hallmark of performances that tower above all others of any given year. All of this from an actor who has shown a slacker mentality from the very inception of his career. This is clearly no longer the case.

It should be mentioned that actor/rock star (30 Seconds to Mars) Jared Leto goes through a similar transformation and should easily get a best supporting actor nomination in the role of Rayon, a AIDS-infected male-to-female sex change candidate. Both Ron and Rayon are fearless characters as different as two people can possibly be who eventually find truths about themselves together. Ron is never less than heterosexual as he fights the medical and pharmaceutical establishments in the early days of AIDS research but does grow enormously as a human being. He completely abandons the homophobic hatred that had always been a part of his life. Everyone he knew hated gays, and he abandoned all those “friends” and moved on to a new life. He slowly became one of the champions of basic human rights by just doing what made sense: saving lives. The pragmatic approach that Ron Woodroof followed was a moneymaking opportunity. It was mixed in with a life and death struggle and the necessity to slowly care about the people he was helping.

Life and death struggles are what the movies are all about, but often they are presented superficially for our entertainment. Nothing is more satisfying than watching a movie where the stakes are high, the fight is hard and the struggle is real. Dallas Buyer’s Club is so eminently watchable because you are sucked into Ron’s crazy scam artist/grifter life from the first minute of the film. You watch the total transition from jerk to “Jesus” in this movie. In the process, you see how many lives he touched almost despite himself. You see how he becomes a better man only after he had lost all hope.

Dallas Buyer’s Club would blow the competition away in any given year because it is a blockbuster of emotion. We know that no matter how much we may hate this man, we will come to love him.