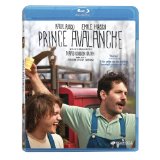 On paper, the premise of Prince Avalanche sounds about as exciting as watching paint dry. The film follows a pair of squabbling workers whose job it is to paint yellow lines in the middle of a country road in the aftermath of a devastating wildfire. They’re basically the only two characters in the movie, and the story never moves away from their desolate surroundings. Although his film is occasionally self-indulgent (by design, I suspect), director David Gordon Green finds the strange beauty in that desolate landscape. He’s also armed with stars who bring this meandering character study to life.

Paul Rudd and Emile Hirsch star as Alvin and Lance. Alvin (Rudd) revels in the isolation of his work and appreciates the benefits of outdoor physical labor. Meanwhile, Lance (Hirsch) is the lazy, immature, inexplicably charming brother of Alvin’s girlfriend. Alvin hired Lance to work with him on the road project as a favor to Lance’s sister (who we never see) and as a way to whip some masculinity into the younger man. The pair experience some emotional ups and downs, and it turns out they both have plenty they can learn from one another.

Though Green has recently directed some commercial comedies (Pineapple Express, Your Highness, The Sitter), Prince Avalanche is a return to the sort of no-frills, quiet dramas (All the Real Girls, Undertow, Snow Angels) that put him on the map in the first place. No one speaks in Prince Avalanche until the six-minute mark, and the film is a remake of a 2011 Icelandic film called Either Way. Green has set his movie in 1988 — which lets the characters keep a relatively contemporary mindset, but also takes the smartphones out of their hands — and the director takes a patient, naturalistic approach to telling his story.

Sometimes the approach is a little too patient. The film clocks in at a little over 93 minutes, but it often feels like Green is straining to fill even that relatively slight running time. The camera often lingers on portions of the real-life state park where Prince Avalanche was filmed and the ugly-beautiful wildlife that inhabits it. The problem is not everyone is likely to find these images as interesting as Green does. Fortunately, these segments get a significant boost from the evocative score by Explosions in the Sky (best known for their wonderful work on Friday Night Lights) and David Wingo.

Rudd and Hirsch also deserve a lot of credit. According to this Blu-ray’s special features, Green knew both actors personally, but had never worked with either of them before. As a result, he was able to tap into aspects of their personalities that movie fans hadn’t necessarily seen before. Rudd plays it straight quite well as Alvin, a manly dork who is too deluded to notice he’s a dork. The actor does good dramatic work, which made a brief, Buster Keaton-like bit of physical comedy in a fire-ravaged house ring false; it didn’t seem like something Alvin would do, it seemed like something Paul Rudd would do. Hirsch, not exactly known for his comedic work lately, is a bit of a revelation as Lance. At first glance, he seems to have the easier job because he gets to earn laughs by playing a dim, bratty character. However, Hirsch also had to make Lance believable as someone Alvin would sincerely want to help…or at least someone Alvin (and the audience) didn’t want to punch every minute of every day. Hirsch’s loose performance accomplishes this.

The only other notable characters in the film are an aggressive Truck Driver (Lance LeGault) who periodically pops in to help get Alvin and Lance drunk, and a nameless Lady (Joyce Payne) who Alvin finds wandering around her burned-down house. Their willfully ambiguous appearances are another part of Green’s off-kilter plan. (Which also includes this movie’s title.) Parts of watching Prince Avalance really do feel akin to watching paint dry, but the movie is also a funny, lyrical ode to the benefits and pitfalls of alone time.

Prince Avalanche is presented in an aspect ratio of 2.40:1. The 1080p image is arrived at with an AVC MPEG-4 codec at an average of 30 mbps. The entire film takes place outdoors, and the Blu-ray serves as a strong showcase for the pleasing, precise work of cinematographer Tim Orr. Most of the woodsy shots feature somewhat of a muted, overcast palette, but the visual presentation is equally strong during scenes that take place in twilight (like the first time we see Alvin and Lance) or in the dewy morning light. The HD image is equally sharp on panoramic shots of the state park as it is with close-ups of the road being painted yellow. Only the brief use of wildfire stock footage sticks out for being noticeably softer than the film’s main presentation.

The DTS-HD Master Audio 5.1 track makes a strong first impression by having the subs rumble to life for the brief wildfire sequence. The rest of the track, however, winds up being more understated than I expected. The subs only pipe up again during the rare instances when a truck ambles down the road. There’s also a more subdued sense of immersion than I expected, given the film’s outdoor setting. At first, I thought this seemed like a missed opportunity, but on second thought the less-aggressive approach fit this particular movie well. Plus, any ambient noise that might be coming out of the rears is replaced by the film’s excellent score. Dialogue also comes through clearly in this well-balanced track that suits the material quite well.

Commentary with writer/director David Gordon Green, set production assistant Hugo Garza, and talent driver Paul Logan: In keeping with the laissez-faire spirit of the project, Green is randomly joined by Logan (who was responsible for driving the actors to and from the set) and Garza (who was responsible for crafts services). Green is accompanied first by Logan, while Garza joins in a little past the 30-minute mark. They’re both passionate about movies and they end up serving as effective soundboards for Green, who discusses his decision to make Prince Avalanche a period piece and points out all the challenges/joys of this extremely streamlined production.

Deleted Scene: (0:30) This one is titled “Do the Dance.” During the film, Alvin tells Lance that he’s not as good a dancer as he thinks. This brief scene shows Hirsch gamely cutting loose, and viewers can decide for themselves. Personally, I thought it was amazingly bad.

Paul and Emile: (6:55) The two stars and Green discuss the project. The director accurately describes the movie as “two buttheads humorously and dramatically coming to terms with each other” and talks about incorporating real-life aspects of the two actors’ personalities. (Like Rudd’s prowess as a handyman, and Hirch’s laid-back demeanor.)

From the Ashes: (9:29) Although the movie is set in 1988, filming took place in and around Bastrop State Park in Central Texas, which was devastated by three fires in 2011. Prince Avalanche was made over 16 days in May 2012, and Green talks about how the beautiful wasteland inspired him to write the movie and adapt “Either Way.” This is my favorite featurette of the bunch.

Lance LeGault: (4:41) A nice tribute to the late, colorful actor who played the brusque Truck Driver. LeGault spent decades as a musician and background player, and could tell tall tales about hanging with Elvis Presley and John Wayne. LeGault died in September 2012, and this was his last film.

Interview with Paul Rudd and Emile Hirsch: (6:47) It seems like this one was taken in the middle of a press junket because the lighting is bad and the actors look a little bleary-eyed. Each of them describes what attracted them to the project. (Namely going into the woods for a few weeks and making a movie with David Gordon Green.)

Interview with writer/director David Gordon Green: (5:02) Green sits in the same poorly-lit room and discusses the project’s origins. It’s also here that he admits the title Prince Avalanche came to him in a dream and doesn’t really mean anything.

AXS TV — A Look at Prince Avalanche: (3:32) A purely promotional piece that consists of clips from the film and snippets of the interviews that are included elsewhere on this disc. Totally skippable.

Prince Avalanche isn’t for everyone, but I get the feeling writer/director David Gordon Green is totally ok with that. The movie casually drifts from moment to the next and features some arresting visuals. Still, the question it really seems to be asking is, “can we just enjoy the silence a little bit?”