Posted in: No Huddle by Jeremy Butler on November 21st, 2013 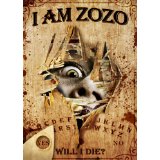 Now here’s a game I never had a desire to play: the Ouija board. I not sure what it is about this game that has made me have a natural aversion to ever being in the same room with it; perhaps it is the knowledge that by playing this game, I may be contacting the dead. Never having been an overly superstitious person, I recognize the extremeness of this act; however, after watching I am Zozo, I believe my aversion is now justified. “Based on a true story,” providing me with yet another reason to avoid Ouija board. I am Zozo starts off in the usual way, a group of friends reunite for the first time in years for a Halloween weekend away at a member of the group’s family getaway that hasn’t been occupied in years. (How come the criteria for this type of film is an abandoned getaway where no one will hear you scream? Next time I want a ghost story in a heavily populated suburban area.) So the group starts off with the usual routine: They catch up, they have a couple of drinks, and then given that it is Halloween someone suggests pulling out the old Ouija board and seeing who they can contact on the other side.

It begins normally, or at least for the standard for such a game; they manage to contact a few harmless spirits (if there is such a thing), but of course naturally there are a few members of the group who are skeptical about the validity of the entire thing, thinking that one of two holding the scroll may be pushing it to simply play a prank on the others, but things suddenly take a turn for the sinister as the group is contacted by a spirit that speaks of their demise.

I am ZoZo was a difficult one to enjoy; there wasn’t really anything in the film that held my interest. The storyline for the overall tale was pretty boring and tame until the Ouija board made an appearance. I did not really get a sense of the characters as we were simply dropped into the story with no background or real description of the characters at all. It was some time before any of the characters’ names actually even registered with me.

Also, though the film may technically fall into the genre of horror, I can’t really recall a time where the movie felt me with a feeling of dread or panic. I will admit that the emergence of the malevolent spirit did pique my interest momentarily, but even that wasn’t enough and was diminished a bit by the fact that when asked to prove that it was real, its solution was a magic trick, though the trick proves its significance in the film’s conclusion. It picked back up again when the spirit took action against a member of the group, but that feeling was quickly replaced by disgust. (You’ll understand if you see it. Though it is never specifically said what the spirit did, given the scene that followed I’m sure you can guess.)

Production quality gave the film gritty look that I assume was intended to give the movie a first-person account type look; however, the film actually resembles more of a found-footage movie. There was mild ominous music to play on the audience’s fears, but I don’t’ recall any feeling of fear within me. The film’s ending appear to be a warning for future users of the Ouija board, warning that if you are contacted by Zozo, that you should stop playing immediately. Message received, loud and clear.

Jeremy Butler is a film school graduate of the International Academy of Design and Technology. He is been writing for Upcomingdiscs since 2012; however, movies have played a big part of his life for much longer. Favorite genres include horror, science fiction/fantasy, and comedy. Favorite movies are V for Vendetta, Boondocks Saints, Kiss Kiss Bang Bang, and The Godfather.
Star Trek: The Next Generation – Unification (Blu-ray) Treme: The Complete Third Season (Blu-ray)