Posted in: Disc Reviews by Brent Lorentson on November 21st, 2013 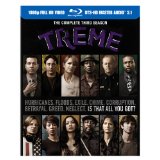 Creator David Simon (The Wire and Generation Kill) has never been a show runner concerned about cliffhangers or plot twists; instead he thrusts his viewers into the day-to-day life of the everyday Joe and shows that real life generates more conflict than most fiction can ever deliver.  Ever since I first watched The Wire I’ve considered myself a fan of Simon’s work, and I feel it could be argued that what Simon did with The Wire is a large factor in why we have the quality of television that we do today.  With Treme he has given us an array of fleshed-out characters; whether they be real or fictional, they all come together to present this allegory of greed and corruption upon the backdrop of a city that is arguably the heart and soul of music.

In the show it has been 25 months since Katrina has torn through New Orleans, and the residents of Treme who have survived the storm are treading their way through the aftermath.  The new season kicks off with trombonist, Antoine Batiste (Wendell Pierce) showing up for a Second Line memorial that is soon broken up by NOPD.  There has always been a disconnect between the police/government and the people of Treme, but post-Katrina seems to have opened the floodgates for more corruption among the members of the NOPD and the city officials.  This corruption introduces L.P. Everett (Chris Coy), a young journalist who is trying to uncover the truth behind suspicious deaths that have happened after Katrina that may or may not be connected to the police.  L.P.’s investigation seems to have a connection to a case Toni (Melissa Leo) has been working since season 2 which already uncovered enough dirty cops in the NOPD.

If the politics come off a little heavy-handed, don’t worry, because there is plenty of that New Orleans music to lift your spirits and toe-tap your way through scenes.  The fiddle-playing street musician, Annie (Lucia Micarelli) has worked her way off the streets and into the bars playing real gigs with a band that she fronts.  Of course we have DJ Davis (Steve Zahn) with a new scheme to make it big, and this time it centers on collecting all the old-school blues and jazz greats and putting them together for a blues opera.  As for Antoine Batiste, he seems to have settled down with his ambitions of running his own band and has focused his attention to working with the school band he assisted in instructing back in season 2.  As for Delmon Lambreaux (Rob Brown) and Big Chief Albert Lambreaux (Clarke Peters), they are coming off their Jazz/Indian album and are now being courted by city officials to help consult on a new music preservation center.

And for those who think I forgot about the taste of New Orleans, we have Janette Desautel (Kim Dickens) still working for David Chang, but she continues to get offers to return to New Orleans to run her own kitchen.  Before this show, I never could have imagined high class cooking could ever be so engaging, but I believe that is due to the fact the show has renowned chef Anthony Bourdain on the writing staff.

Season 3 has the characters weaving in and out of one another’s lives in a much more fluid way, allowing us to see a clearer divide between our characters and the corruption and greed they are up against.  There is so much going on this season that there is never a moment that feels as though it is filler; here every scene counts, and just about every scene is above all else that is on television.  This is a show filled with brilliant writing, wonderful impactful performances, and direction that elevates the show to a caliber most dramas wish they could resemble for even a moment.  Yet the show fails to gain in viewership, and that is frustrating.  No, it doesn’t have the action of Breaking Bad or flesh-eating zombies, but it delivers more memorable moments and characters than most that is out there.  Hopefully this is a show that will follow in the footsteps of The Wire and Generation Kill and discover its audience through the numerous other platforms that are available.  This is a show that avoids sticking with the traditional conventions in storytelling and instead delivers an honest account of the aftermath of Katrina with some amazing music along the way.

Treme is presented in 16:9 in its original 1.78:1 ratio.  The 1080p image is arrived at with an AVC MPEG-4 codec at the average of 25-32 mbps.  This may be one of the best-looking shows out there, and they make it look so easy.  The club scenes are warm and richly textured with plenty of depth and no grain that I could see.  Usually you read about the attention to the black levels, but what got me to notice is how well the whites come through.  When the cameras are in the kitchen there is so much white between the uniforms and the walls there would be concern for blowing out the image, but instead we get a detailed separation and still deliver natural skin tones.  As for the exterior Mardi Gras parade scenes, all the bright rich colors come through beautifully, where we can appreciate all the detail in the Indian costumes.  Along with all the beautiful camera work throughout the show, where it is nearly impossible to tell a set from a real location, this is as good as it gets.

The DTS-HD Master Audio 5.1 is robust to say the least.  The surround sound is immersive, especially during the performance scenes where not only do you get clarity of all the musicians, but everything is balanced well enough to hear the actors speak clearly.  As for the scenes on the streets, what must have been a nightmare during the Second Line and other parade scenes, we get plenty of background noise but also the clarity of the performances.  For the music lovers this mix is a dream with this gumbo blend of music for your listening pleasure.

Down In The Treme: A Look At The Music And Culture Of New Orleans:  This is an in-picture viewing mode that works like a popup video that has factoids about various elements of the production of the show.  This is an option that is available for all the episodes. I have to say I was a little bummed by this feature and was hoping for a more thorough behind-the-scenes feature instead.

The Music Of Treme:  This is another popup option that allows you to get more information about the music playing throughout the course of the episode.  This also is an option you can have play during every episode.

Behind Treme: Chef Dinner: (4:22) This is a glimpse into what went into one of the landmark scenes of the season that brought numerous world-renowned chefs together for a dinner scene.  I wanted more of these kinds of features, seeing what the chef went through to make the dinner look so good on camera is the kind of insight we (or at least I) look forward to with these features.

Behind Treme: David Simon (9:24) Here is the best feature of the bunch where we get an interview with the creator of Treme.  His insight to how he works and goes about creating a show is just one of the numerous reasons why I respect the guy.  I appreciate how he also addresses the viewership of Treme as well as his previous shows.

Behind Treme: Neville Brothers: (2:27) A very brief moment with the Neville brothers as they discuss their place in the New Orleans music scene.

Audio Commentaries:  Of the ten episodes we get five commentaries with various directors, writers, and actors in the show.  Anthony Bourdain and Wendell Pierce were my personal favorite commentators.  For the most part the commentaries offered up some interesting insight, but there are too many moments with long stretches of silence.

Music Commentaries:  WBGO’s Josh Jackson and NPR Music’s Patrick Jarenwattananon are paired together for a commentary track attached to every episode where they discuss selected music choices and performances.  Though these guys offer plenty of insight throughout the course of all the commentaries there is a lot of dead air on all the tracks.

Welcome To The Underground: This 12-minute piece has the cast and crew talking about the somewhat radical changes for the third season. You also get a look at some production design for the new Grandville underworld sets.

The Other Side II – Web Series:  The second of these web episodes. They feature Zack, a ghost from this season, dealing with the temptation to join the group of ghosts who refuse to cross over. There are eight, and you can view each one individually or all at once. Together they run a little more than 20 minutes.

This is one of my favorite shows currently on the air.  The music and its characters are infectious and suck you into this world in which despite all their hardships the people keep their chin up and push on to another day.  A sign of a great show is its ability to transcend its plot and become something every viewer can relate to.  Let’s face it, corruption in government isn’t localized to just New Orleans, and Obamacare can easily be viewed as our current large scale Katrina.

Brent Lorentson is a horror writer and film critic based out of Tampa, Florida. With a BA in Digital Film, he co-wrote and co-directed Scavenger Hunt. His short stories have appeared in various horror anthologies. In 2019 his short script Fertile Blood will be a part of the anthology horror film Slumber Party. He is currently working on his first novel A Dark and Secret Place set to be released in late 2019. Favorite Films: Taxi Driver, Fight Club, I Saw the Devil, The Wild Bunch, Dawn of the Dead, A Clockwork Orange, Pulp Fiction, Heathers, The Monster Squad, and High Fidelity.
I Am Zozo It’s a Spongebob Christmas!