Posted in: Disc Reviews by Gino Sassani on November 20th, 2013 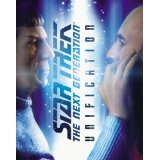 What a difference a couple of years makes. Rick Berman was pretty stubborn about wanting The Next Generation to live on its own without connecting to the original show, perhaps as much as the fans would have liked. There was, of course, the cameo by DeForest Kelley in the pilot, but he was never called McCoy, only Admiral. Yes, we knew who he was, and his interplay with Data was intended to remind us of his relationship with a certain Vulcan. The original Enterprise would be referenced in The Naked Now that first season. It was the only direct sequel of an original episode to air. When season 3 brought the return of Mark Lenard as Sarek, Berman was insistent that no mention of Spock or the original show be made. After a barrage of pleadings from the writers he relented… slightly. He decreed that Spock’s name could only be mentioned once and no other connections be in the script.

Times had changed by the fifth season. Part of the change was purely marketing. At the same time the fifth season’s production filming was underway for what would become the final film for the entire original show’s cast members, Star Trek VI: The Undiscovered Country was also in production. It was decided there could be some crossover between the two projects. Michael Dorn would join the cast of the film as an ancestor of Worf. The most important moment would come, however, in a special two-part episode of The Next Generation. Leonard Nimoy reprised his role of Spock for Unification.

The plot would involve a spy photograph from Romulus that appeared to show Spock (Nimoy) on the planet with a Romulan senator (Throne). Picard is tasked with finding out if Spock had defected and bringing him back to the Federation. His first stop takes him to a dying Sarek (Lenard). From there the crew would split up. Picard and Data would borrow a Klingon cloaked ship and go to Romulus where they would encounter not only Spock but a certain Romulan commander-daughter of a former crewmate. Spock is there to lead an underground movement to bring together the Vulcan and Romulan people…unification. Riker is sent to find out how a part of a junked Vulcan ship ended up far away from the scrap yard where it was supposed to be. Of course, these stories are linked and lead to an attempt by the Romulans to invade Vulcan.

CBS has been releasing a two-part episode as one film since the high-definition project began on The Next Generation. The previous releases were the combination of the season finale cliffhanger with the resolution from the beginning of the next season. It was a nice touch. You no longer had to wait until the next set was released to have a complete story. After all, it wasn’t like anyone who was likely to buy these things didn’t already know how it ended. That changed with the fifth season. Unification actually occurred early in the season, while the finale was Time’s Arrow. This time you really will have to wait until the next release. It was decided there would be more interest in the Spock episode, and they’re probably right. It was certainly a milestone moment in the history of the franchise. The only flaw in that logic is that fans will likely just get the series discs.

The episode also marks the return of another original series star. Malachi Throne was also in the only two-part original series episode The Menagerie. He played Commodore Mendez who led Spock’s court martial in the new material that was combined with the elements from The Cage, where he was also the voice of The Keeper. Here Throne plays Spock’s friend Senator Pardek.

The episode is presented in its original full-frame aspect ratio. The 1080p image is arrived at with an AVC MPEG-4 codec at an average 25 mbps. The image is sharper than it has ever looked for this series. Colors have a rich texture that I found quite impressive, particularly the deep red of the new uniforms. This episode takes advantage of the image’s texture. The Romulan culture has a texture of its own, and it shines here. Because the episode stands alone, the bit rate is high and quality is superb.

Deleted Scene: (1:42) This is a scene between Perrin and Picard as she comes aboard the ship.

From One Generation To Another: (16:43) Cast and crew talk about the historic episode. There is also some talk about the crossover bits with Trek VI.

There’s no question this is one of Trek’s stronger episodes filled with a ton of nostalgia. It is quite nice to see Patrick Stewart working with Nimoy, to be sure. You get the benefit of the new digital effects and a high definition restoration of the material. You can also watch it as a single “film” instead of in two separate parts as you must with the fifth season release which we will also be reviewing soon. There’s an argument to be made that it’s worth a few bucks more to put in your collection. It’s not a must-own, but it does add a little something extra to a fine video collection. “I have had some experience in these matters.”

Gino Sassani is a member of the Southeastern Film Critic's Association (SEFCA). He is a film and television critic based in Tampa, Florida. He's also the Senior Editor here at Upcomingdiscs. Gino started reviewing films in the early 1990's as a segment of his local television show Focus. He's an award-winning recording artist for Omega Records. Gino is currently working on his 8th album Merchants & Mercenaries. Gino took over Upcomingdiscs Dec 1, 2008. He works out of a home theater he calls The Reel World. Favorite films: The Godfather, The Godfather Part II, The Body Snatcher (Val Lewton film with Karloff and Lugosi, not the pod people film), Unforgiven, Gladiator, The Lion King, Jaws, Son Of Frankenstein, The Good, The Bad And The Ugly, and Monsters, Inc.
Combat!: The Complete Series I Am Zozo