Posted in: Disc Reviews by Gino Sassani on December 4th, 2013 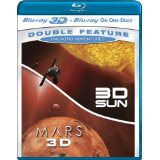 Galactic Adventures from Image Entertainment is a nifty little collection of two Solar System IMAX films both running just under a half hour. The two short documentaries off a 3D ride to both the Sun and Mars. The films were produced in 2007 with 3D Sun opening at The Smithsonian’s Air & Space Museum. Both films have made the circuit of science museums throughout the country and come to you now through the modern milestone of home 3D for the first time ever.

We’ve all seen Al Roker deliver the daily weather from his set on the Today Show at NBC. I can promise you that you’ve never seen a weather report like this one. Roker narrates this look at the Sun’s weather patterns. We’re talking about CME’s, more commonly known as Coronal Mass Ejections. That doesn’t refer to kicking out unruly Eagles fans at the stadium on Sundays. These ejections propel radiation towards the Earth at a staggering million miles an hour. While the Earth’s magnetic field protects us from being harmed by these deadly storms, they do cause serious issues for astronauts in space and all of those communication satellites we rely on for everything from emergency response to watching that aforementioned football game on our televisions each Sunday afternoon. It’s important that we’re able to predict these eruptions and protect all of our “stuff” in orbit.

That’s why NASA has launched the twin STEREO spacecraft. These craft take brilliant 3D images and relay them back to Earth. By keeping such a detailed watch, these spacecraft provide the warning we need when a CME is on the way. It’s much the same way that our satellite technology gives us warning when a hurricane might be approaching an otherwise unsuspecting island population.

The documentary takes us behind the scenes for the development and launch of the craft. We are then treated to some of those stellar 3D images. We get to see demos of the craft to understand how they function.

Mars is the planet most like the Earth in our solar system. By exploring the Red Planet we might be getting a glimpse into our own future. The planet has been the subject of questions and mysteries since Galileo himself turned the world’s first telescope on our neighbor in the sky.

This documentary follows the ROVER project. Two craft were sent to Mars. Once in orbit they descended to the planet’s surface and bounced to a final stop on large inflated balloons. Once free of the craft, these rovers began to roam the planet. Each contains a miniature laboratory where various tests and experiments can be made on the planet’s rocks. The big goal is to find evidence that liquid water might have existed on the planet’s surface at one time in its past. Of course, water could very well mean life…the ultimate objective for the program. No one suspects there is life there now, but could there have been at one time?

This documentary takes us to the launch of the craft and delivers computer-generated demonstrations of how they would land and be deployed. The most stunning images are actually stills. These are the images sent back by the rovers themselves and deliver Mars like never before.

Galactic Adventures is presented in an aspect ratio of 1.78:1. The high-definition 3D image is arrived at using the standard duel MVC codec at an average 27/12 mbps. All of this is direct computer animation or pretty modern documentary cameras. That means you’re going to get a solid picture without issue. The information is there, and it’s sharp and bright. Colors are often bright and distinct. Black levels are just fine, although there really isn’t much need for the likes of impressive shadow definition here. This was originally an IMAX presentation. The actual footage and photographs from the projects provide the most stunning of these images. The 3D stands out here. There are some moments in the Sun documentary, however, where the Sun appears pointy instead of round. Otherwise there are some cool images here, or should I say hot?

The DTS-HD Master Audio 5.1 is there almost exclusively to provide narration. There are some occasional surround elements, but they never really dominate the mix.

Both films are very short and so can’t deliver any real detail in the education department. They do make great starter discs for someone with a new 3D television they are hoping to build a library for. With these images you can count on getting “as close as you’ll ever want to get”.

Gino Sassani is a member of the Southeastern Film Critic's Association (SEFCA). He is a film and television critic based in Tampa, Florida. He's also the Senior Editor here at Upcomingdiscs. Gino started reviewing films in the early 1990's as a segment of his local television show Focus. He's an award-winning recording artist for Omega Records. Gino is currently working on his 8th album Merchants & Mercenaries. Gino took over Upcomingdiscs Dec 1, 2008. He works out of a home theater he calls The Reel World. Favorite films: The Godfather, The Godfather Part II, The Body Snatcher (Val Lewton film with Karloff and Lugosi, not the pod people film), Unforgiven, Gladiator, The Lion King, Jaws, Son Of Frankenstein, The Good, The Bad And The Ugly, and Monsters, Inc.
Holiday Gift Guide Spotlight: Image Entertainment Television Classics Good Ol’ Freda (Blu-ray)