Posted in: No Huddle by Jeremy Butler on December 9th, 2013 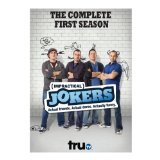 “WARNING: The following program contains scenes of graphic stupidity among four friends who compete to embarrass each other…”

Pranking…the bedrock of any friendship; I don’t know about you, but I don’t really consider myself friends with anyone until one of us pulls a prank on the other one. Don’t misunderstand, I in no way condone harmful pranks (unless they’re funny, just joking) but there is absolutely nothing wrong with a little good-natured ribbing between close friends. After all, if your friends can’t embarrass you, who can?

Impractical Jokers is a hidden camera reality competition series between lifelong friends Sal, Joe, Q, and Murr, as they compete to embarrass one another a multitude of scenarios, such as working at White Castle and being forced to do whatever your buddy demands via an earpiece, speed dating with cheesy ineffective pickup lines, or sharing embarrassing text in a public place. Each episode is rooted in the competition with the main goals being victory and humiliation.

This was an interesting series to say the least; it plays on a fundamental aspect of friendship: pranks. Seriously who hasn’t played a prank on a friend? It’s the cardinal rule; when two people enter a friendship it is understood that when the opportunity presents itself to embarrass one party it is the other party’s responsibility to seize said opportunity to ride it out for all it’s worth; there is plenty of that in these episodes, especially during the White Castle competition, which was so good that they had to do it again.

One of the show’s strongest selling points is its simplicity; this is a gag series, that’s all. The show’s sole purpose is to get the audience to laugh, and yes, it is usually at the expense of someone else, but come on, it’s all in good fun. Such is the case at the end of every episode when the loser of the competition must be subjected to a punishment chosen by the others. That is part that you will most want to watch.

Though I did enjoy the series, I have to admit that halfway through the seventeen-episode order my interest in the show did begin to wane. With a series like this, I’m of the opinion that the season should be contain to an even set amount because there is only so long that the audience can watch.

The discs also come with some bonus features that are worth a peek: Deleted scenes which include a few antics that didn’t make the cut, Audio commentary from the stars on select episodes, and a feature where you get up-close and personal with the stars of the series and see what makes them friends.

Pay It Forward (Because the original is normally the best)

Jeremy Butler is a film school graduate of the International Academy of Design and Technology. He is been writing for Upcomingdiscs since 2012; however, movies have played a big part of his life for much longer. Favorite genres include horror, science fiction/fantasy, and comedy. Favorite movies are V for Vendetta, Boondocks Saints, Kiss Kiss Bang Bang, and The Godfather.
Women Without Men Mary Poppins: 50th Anniversary Edition (Blu-ray)