Posted in: No Huddle by Archive Authors on December 9th, 2013 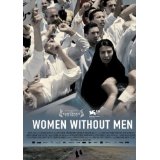 Women Without Men is a unique film. It is not a perfect one. It is full of divided loyalties between people and cultures. It mixes reality, dreams and magic. It is mundane and beautiful. It is full of resentment, pain and hatred, but it strives for freedom and happiness. The filmmaker Shirin Neshat has been exiled from Iran for many years and has lived in many places including New York City. Neshat left Iran in 1979 when the Islamic revolution overthrew the government of the Shah. As an artist critical of the Iranian government, Neshat has been banned from returning to her homeland since 1996.

The film takes place in 1953 (a few years before Neshat was born) and details a climate of oppression that has existed in Iran for as long as many can remember. The film ends with the epitaph, “dedicated to the memory of those who lost their lives in the struggle for freedom and democracy in Iran from the Constitutional Revolution of 1906 to the Green Movement of 2009”.

Women Without Men details the lives of four women who find they must escape oppression by any means. They are all driven by different motives, but it stems from a common source. Women in Iranian culture are treated like servants, possessions or whores. The film begins when Munis stands on a roof contemplating the sky. Eventually she takes flight thinking, “Now I’ll have silence. Silence and nothing. And I thought the only freedom from pain”. Her brother shrieks that she has disgraced him and buries her in the courtyard. But Munis rises from the dead when her friend, Faezeh, hears her voice and uncovers her body. Faezeh was there to implement a spell to force Munis’s brother to marry her. Faezeh follows Munis to a forbidden place where men congregate. Munis is invisible to the men, but Faezeh is not. Faezeh runs away and is followed by some men and raped. Munis finds Faezeh and they go on a long journey by foot.

Zarin (Orsi Toth) is a prostitute whose spirit is broken and who finds existence unbearable. She runs away to a bathhouse and scrubs her emaciated body until it bleeds. She then wanders on a long journey by foot.

Fakhri (Arita Shahrzad) is a 50-year-old wealthy wife of a general who meets an old boyfriend. Her husband thinks her a fool, but she is able to leave him because she has money. She buys a deserted orchard property to start her life anew. It is on this property that all the women converge.

The cinematography, at times, attains near perfection. Moments of beautiful stillness occur on this remote property. It is its own kind of garden heaven. All the women find this place in various states of disconnect from reality. The magical realism of the novel in which it was based subtly takes shape. In that mystical world the harsh realities of politics are always infringing on any sense of peace.

In one of the numerous extras, the director expresses in more concrete terms how difficult it is to find a happy medium. She clearly desires peace between men and women, East and West, but knows that it is a goal that is a far way from being reached. She is clearly looking at oppression from many angles. It is not the simple “Death to England, Death to America” that we have become accustomed to hearing. Women want to be free of the many forms of tyranny that make their lives unbearable. But women are a metaphor for a country governed by imperialism for many years. Neshat is a perfect person to look at this because she is caught between the Western decadence that is decried by the autocratic Iranian state.  She is banned by the Islamic revolutionaries. She loves her country and its history of striving for a true democracy. She is also an artist, concerned with vague concepts that defy definition. The things that Neshat is most impassioned for is the freedom to let the spirit fly and let the imagination and inner perceptions free. She seems to harbor naive hopes, but the film ultimately concludes that all hope for freedom in Iran is long gone. In 1953 there was a free Iran, but it was overthrown by the Shah. Americans like myself will never understand the complexities of a world so outside our own. Americans like Neshat can see that she will never be able to live free in her homeland.

Women Without Men suggests that there will never be any resolutions. That is why death seems to be the answer for her main character.

Out Of The Furnace Impractical Jokers: Season One