Posted in: Disc Reviews by Gino Sassani on December 9th, 2013 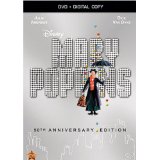 “Wanted: a nanny for two adorable children. If you want this choice position, have a cheery disposition, Rosy cheeks, no warts. Play games, all sorts. You must be kind, you must be witty, very sweet, and fairly pretty. Take us on outings, give us treats, sing songs, bring sweets. Never be cross or cruel. Never give us castor oil or gruel. Love us as a son and daughter, and never smell of barley water. If you won’t scold and dominate us, we will never give you cause to hate us. We won’t hide your spectacles so you can’t see, put toads in your bed, or pepper in your tea. Hurry, nanny! Many thanks!”

And so the call goes out for Mary Poppins. It was 1964 and Walt Disney had a terrible time convincing writer P.L. Travers that Walt Disney Studios should be the ones to bring her flying nanny to life in a feature film. Those trials and tribulations are the subject of a new film out by Disney called Saving Mr. Banks. And so the Blu-ray release of Mary Poppins has been timed to the box office release of Mr. Banks.

Long before Harry Potter came on the scene, Mary was delighting children all over the world with her spectacular magical abilities. At the time Walt Disney was making a name for himself and his studio by bringing many of the children’s classics to the big screen. From fairy tales to Winnie The Pooh, the studio was providing the look and the soundtrack to the imaginative worlds already known and beloved by millions. It was a magnificent strategy, and it would pay off huge for the company. The problem with Mary Poppins was that it needed to be a live action film. Mary and her pals needed to appear as real people. The worlds themselves could be animated, of course, but Mary and Bert and the children had to be real. Walt insisted upon it. And so a pains taken effort was begun to bring the story to life on screen in a way no film had yet done before. The results were as magical as Mary herself and have captivated children of all ages ever since.

In the 1960’s Walt Disney was the center of some of the most groundbreaking f/x technology in Hollywood. Disney was that era’s Industrial Light & Magic. Even films not produced by the Mouse Factory went to their f/x wizards for their high end work. Films like Forbidden Planet made use of the Disney magic for a few of their trickier sequences. Mary Poppins is a wonderful example of the magic that Disney was capable of at the time. The film is a wonderful blend of live action and hand drawn animation work. The two worlds interface seamlessly even by today’s standards.

You can’t really pin down the success and endurance of this film to any one thing. There are two elements that can’t be ignored here. The songwriting Sherman Brothers share considerable credit for the film’s appeal. Even if you’ve never seen the film, and it’s hard to imagine there is anyone who hasn’t, you do know many of the unforgettable songs from it. Just A Spoonful Of Sugar, Chim-Chim-Cher-ee, Let’s Go Fly A Kite, and, of course, Supercalifragilisticexpialidocious. The melodies are simple but catchy. Once you get them into your head it’s an awful chore to try and remove them. The Sherman Brothers are responsible for many of Disney’s famous melodies from most of the musical films. If Walt Disney himself came with a soundtrack, you can bet the Sherman Brothers would have written it, and you’d still be singing it today. The songs captivate children, but somehow even adults can’t seem to help but be enchanted by them.

The second half of this formula would have to be the cast, particularly Dick Van Dyke and Julie Andrews. Both turned their characters into iconic milestones of their careers and the memories of children everywhere. One can’t imagine anyone else in the parts. I’ve never seen the long-running Broadway production, and you will get glimpses of it here in the extras, but for me, no one else can ever fill those roles. This is a film that ought never to be remade. If you don’t know the story by now, shame on you. I won’t even attempt to tell it here. Get the disc and experience it for yourself. You’ll never regret the time you spent.

Mary Poppins is presented in its original aspect ratio of 1.66:1. The 1080p image is arrived at with an AVC MPEG-4 codec at an average 25-30 mbps. Colors are reproduced cheerfully and don’t seem to show their age at all. The animation is particularly bright with wonderful texture. You can really see that part of it when the gang enters one of Bert’s chalk drawings. Black levels are outstanding. The print itself has been cleaned up exceptionally well from its most recent release. Gone are any artifacts or imperfections. In fact, the high-definition image presentation is, at times, almost too good. You can see some of the blue-screen lines in a typical halo effect. There’s an appropriate amount of grain. I’m thankful the film hasn’t suffered the overuse of DNR that has been going around Hollywood lately.

The DTS-HD Master Audio 7.1 does a great job of not being overdone. Ambients are kept to pretty much musical numbers and the occasional subtle sound. Dialog is crisp and clean. The film does not give away its age with any surface noise. It’s as dynamic as possible without completely taking away the original charm.

The classic extras from the DVD release are included here. There are also two new extras. These are in high definition.

Becoming Mr. Sherman: (14:10) On the surface this feature would appear to be a promotional piece for Saving Mr. Banks. In some ways it is. It includes the film’s trailer. However, it’s a bit more than that. Richard Sherman is joined by Jason Schwartzman, who plays him in the film. They talk about what the Shermans went through to sell Travers on their ideas. There are also some behind-the-scenes moments of the new film.

Mary-Oke: You can probably guess that this is a sing-along segment for the film’s magical songs.

The characters are memorable, and the songs are timeless. I have memories of my tiny wooden box phonograph and some Disney 78 RPM records from the film. I wore out the records and the needle. When my parents wouldn’t buy me another needle I learned a physics lesson. I cut a sewing needle in half and jammed it into the soft rubber that held the diamond needle. It was scratchy and killed my records, but dang if it didn’t work. I still remember how I gathered around the cheap record player with some friends in the neighborhood. We’d sing the songs, and the girls would act out the movie. I was always Bert. I’m not sure if it was because I was always dirty or that I knew the words to Chim-Chim-Cher-ee by heart. Whatever the reason, we had hours of fun in those days. What’s great is that Mary Poppins is the kind of film you can share with your own children or grandchildren. It still works on almost every level. Mary Poppins isn’t a film, it’s an experience. That’s why it will be around in another 50 years. In a word, it’s “supercalifragilisticexpialidocious”.

Gino Sassani is a member of the Southeastern Film Critic's Association (SEFCA). He is a film and television critic based in Tampa, Florida. He's also the Senior Editor here at Upcomingdiscs. Gino started reviewing films in the early 1990's as a segment of his local television show Focus. He's an award-winning recording artist for Omega Records. Gino is currently working on his 8th album Merchants & Mercenaries. Gino took over Upcomingdiscs Dec 1, 2008. He works out of a home theater he calls The Reel World. Favorite films: The Godfather, The Godfather Part II, The Body Snatcher (Val Lewton film with Karloff and Lugosi, not the pod people film), Unforgiven, Gladiator, The Lion King, Jaws, Son Of Frankenstein, The Good, The Bad And The Ugly, and Monsters, Inc.
Impractical Jokers: Season One All the Boys Love Mandy Lane (Blu-ray)