Posted in: No Huddle by Archive Authors on December 10th, 2013 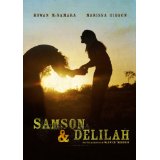 In this day and age, making a small film about people on the fringe of civilization is not the way to make friends and influence people. In this case, the film made many friends and influenced many people. It is no doubt a small film, but it won the Camera d’Or at the 2009 Cannes Film Festival. It was nominated as Australia’s official selection to the Academy Awards. It won numerous major awards in Australia, Asia, and oddly enough, at the Dublin Film Festival.

The film is called Samson and Delilah, but it has little connection to the Biblical epic. The two title characters are indigenous Aboriginal 14-year-old teenagers living in the central Australian desert near Alice Springs. The desolation and isolation is underlined by the clear implication that these people are excluded by their society. They are surrounded by decay, emptiness, half-built buildings and cars on blocks. There is little else here.

Delilah (Marissa Gibson) spends her days caring for her grandmother and helping her with her pills and assisting in her painting. It appears there is a demand for these paintings, because the local store owner anxiously picks up canvases and asks when the next one will be done. The grandmother is a simple woman and seems happiest when she sees Samson (Rowan McNamara) follow her granddaughter around like a hungry puppy. She cackles joyously. She dies soon after. This is a story about desperation, loneliness, hopelessness and possible redemption.

The Aboriginal population in Australia is still treated like forgotten, invisible people, and it imbues their spirit. They are a beaten people, and their plight is epitomized by this sympathetic and attractive couple, but it takes a long time for them to become a couple. They are brought together by adversity, of which there is plenty. Samson sniffs petrol for longer and longer periods as time goes on. He is also beaten by his family for his antisocial behavior. Delilah is beaten because she is blamed (unfairly) for not properly taking care of her grandmother. The two ostracized youths then steal a car to go to civilization.  They wind up living under a bridge with a homeless alcoholic white man (played by the director’s brother). Things go from bad to worse as Samson’s sniffing habit becomes chronic and he doesn’t even notice when Delilah is abducted, raped and beaten. Delilah joins Samson’s habit and is hit by a car while aimlessly walking on the road. Samson believes Delilah dead and now descends even deeper into the sad addiction. Eventually Delilah returns and rescues Samson. They are not welcome back where they came from, as a result of stealing the community car.

At the end, in an even more isolated location, Delilah and Samson bond and mature and show signs of recovering from their despair.

I know this movie doesn’t sound like a lot of fun, but many good movies are not about fun. They are about finding honesty in the moments of real characters. It is about learning about hidden facets of life. Everything here is honestly realized. It teaches about how so many people all over the world live lives so marginalized as to barely exist. It is a cliche to say they show resilience under their circumstances. They have no choice. Their options are nearly nonexistent. They are two very appealing people whose lives are nearly destroyed by a world they cannot understand. On some level, that is something all of us can identify with.

All the Boys Love Mandy Lane (Blu-ray) The Simpsons: The Sixteenth Season (Blu-ray)