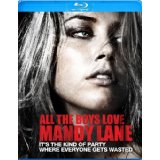 “There she is boys…Mandy Lane. Untouched. Pure. Since the dawn of junior year, men have tried to possess her and, to date, all have failed.

With its deep-red title card and the blood-curdling scream that opens the film, All the Boys Love Mandy Lane is very clearly a horror flick from its first frame. However, the movie displayed its greatest potential — a lot of which it squandered — when it seemed less preoccupied with who was going to kill Mandy Lane, and more interested in who was going to deflower her. The result is a promising, pitch black high school satire that eventually gets invaded by a run-of-the-mill horror film.

“Some have even died in their reckless pursuit of this angel.”

Mandy Lane (Amber Heard) is a pretty outsider who really, um, blossomed over the summer that preceded her junior year. All eyes are on her (and her various body parts) as the film opens and she meets up with her loner best friend Emmet (Michael Welch). The duo winds up at a rowdy pool party that takes a tragic turn. Toward the end of the school year, Mandy — now closer with the popular kids in her school — gets invited to a party at a secluded ranch.

The guys at the party — Red (Aaron Himelstein), Jake (Luke Grimes) and Bird (Edwin Hodge) — compete to be the one who hooks up with the virginal Mandy. The other two girls — Chloe (Whitney Able) and Marlin (Melissa Price) — roll their eyes and bicker with each other. Just after we meet shotgun-toting ranch-hand Garth (Anson Mount), an unseen creep starts stalking the kids and the bodies start piling up.

The good news is that All the Boys Love Mandy Lane isn’t a Scream-like whodunit because the unsurprising identity of the killer is revealed a little more than halfway through the film. The bad news is the actual conclusion of the film is telegraphed to the point that you’ll probably figure it out even if you’re only halfway paying attention. The ending is also unsatisfying considering the many different directions the movie could’ve gone.

Although it’s just now making its Blu-ray debut, All the Boys Love Mandy Lane was the 2006 directorial debut of director Jonathan Levine. He showed some impressive chops as a visual storyteller in his first film. The cinematography by Darren Genet is a mixture of graceful, gliding camera movements (an eye-catching jump off a roof; a pulse-pounding long take of a girl running away from a car) and a sense of grit that makes it fit in with low-budget horror flicks from the ‘70s. (If only Mandy Lane had imported more of the nastiness of those films.) The strong soundtrack — mostly wistful indie rock — occasionally makes it seem like a teen dream movie from the ‘50s, adding to the film’s timeless quality.

Amber Heard has worked steadily in Hollywood in recent years, and it’s not hard to see why. She’s stunning to look at, but I’ve never really been impressed with any of her performances until now. The actress was about 20 when she made this film, so she had a rounder, softer face that suited her virginal character. Early on, we learn Mandy’s had some tragedy in her family life, and it’s a tricky balance for Heard to play someone who doesn’t totally fit in with the cool kids or the outsiders. I suspect her performance gets more interesting when you re-watch the film. Other than that, the cast was your typical assembly line of attractive horror movie cannon fodder. I did like the gusto with which Welch approached his outcast character, and I was really impressed by the depth Able brought to the alternately insecure, nasty, confused Chloe.

Levine went on to direct a “cancer comedy” and made a romantic comedy hero out of a zombie earlier this year. So it’s no surprise to see him — working from a script by Jacob Forman — bring some out-of-the-box thinking to the horror genre in his debut. The killer is revealed with about 40 minutes left; you don’t even have to be trying to guess anything to realize there’s gotta be something else going on here. I just wish the filmmakers had trusted their audience a little more, instead of going all-in on a twist they desperately seemed to want to give away.

All the Boys Love Mandy Lane is presented in an aspect ratio of 2.40:1. The 1080p image is arrived at with an AVC MPEG-4 codec at an average of 25 mbps. This low-budget film may have been made in 2006, but the visual presentation is very much of the caliber of a Blu-ray in 2013. The film’s Texas setting bring a lot of the expected high contrast to wash out the oppressively sunny image a bit. (Mandy Lane effectively breaks away from other slasher films by having a few of its kills in broad daylight.) There’s also the aforementioned grit (in the form of steady grain) that gives the film its ‘70s vibe. Thankfully, the grain never becomes distracting. Most impressive of all are the deep black levels, which become key during the terrifying night at the ranch. The image goes occasionally soft and is not as razor sharp overall as a lot of contemporary releases. But Anchor Bay still deserves credit for treating this neglected title so well in terms of its visual punch.

The DTS-HD Master Audio 5.1 track is generally as aggressive (and occasionally unpolished) as the film itself. There is a more understated sense of immersion than I expected, given the outdoor setting. But since the entire surround field predictably and impressively jolts to life during the action/kill sequences, I actually appreciated the fact that they pulled back a bit with the ambient noises on the ranch. The track even gives the viewer a nice sense of directionality, particularly when a shotgun blast and a burst of fireworks start out in the front speakers and ring out across the subs and rears. Like the visual presentation, this track is much better than you’d expect for a movie that has effectively been sitting on a shelf for seven years.

Feature Commentary with director Jonathan Levine: As he sits down to record this commentary, Levine admits he hasn’t seen the film in about seven years. Still, it’s clear the director has very fond memories of the hungrier, more inexperienced filmmaker he was when he made this film for $600,000 in Austin, Texas. (He constantly pokes fun at the technical mistakes he made.)  Levine does tend to go off on tangents when there’s a crew member or musician to acknowledge, but this entertaining, self-deprecating track is definitely worth a listen.

Just like with Warm Bodies, I enjoyed the concept behind All the Boys Love Mandy Lane more than the actual execution.

The film made the festival rounds in 2006-07, and got a 2008 theatrical release in the United Kingdom, before finally getting a video-on-demand and limited release earlier this year. I’m glad to say it now arrives on a strong, swell-looking Blu-ray. Despite its flaws, this film was too good and (especially) too well-made to sit on a shelf for seven years.