The Simpsons: The Sixteenth Season (Blu-ray)

Posted in: Disc Reviews by Gino Sassani on December 10th, 2013 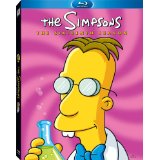 “Homer Simpson, it’s time you got what’s coming to you.”

What’s been a long time coming is bringing television’s longest ongoing scripted series to high definition and Blu-ray. There’s so many seasons that it’s going to take some time to get there. While the recent years are now coming out on Blu-ray, Fox has been working hard to get some of the older seasons up to speed. It’s time for season 16.

This thing has been on forever. Still, it never gets old. The show has a charm yet edginess to it that can’t be beat. Let’s not forget that while kids might love the show, this stuff is intended for adults. We’re not talking South Park trash talk here; every episode is a veritable treasure hunt of subtle and not-so-subtle cultural references. Even after seeing an episode several times, it’s not uncommon for me to find something that I missed before. That certainly gives this show the rewatchability that allows it to survive both in syndication and on home video. The Simpsons is pretty much on all the time around the world.

The head of the Simpson family is father Homer (Castellaneta). Homer’s pretty much a moron who happens to run a control panel at the local nuclear power plant. There’s nothing he wouldn’t do for a donut or a Duff’s beer. He happily meanders into the most outrageous situations with really no control over his family at all. Mother Marge (Kavner) loves her family but is usually frustrated by Homer’s mess-ups. She’s the smart one who manages to keep the family together. Son Bart (Cartwright) is a teenage bad boy on a skateboard. Whatever prank there is, he’s played it. He’s lazy and will go to great lengths to get out of work. Daughter Lisa (Smith) must have been adopted, but wasn’t, much to her own disappointment. She’s bright, hard-working, and talented. Too bad she ends up thwarted most of the time by her father or brother. There’s baby Maggie to wind up the family. Homer likes to hang with his friends at Harry’s Bar, where he can relax with a Duff in his natural element. The town of Springfield is populated with all sorts of colorful characters who often weave their lives intricately into the lives of the Simpson clan. Of course, this isn’t news to any of you. Love them, hate them, or indifferent, everyone knows The Simpsons.

The 16th season contained the shows landmark 350th episode. Here are some other highlights.

Some highlights of the year include the annual Treehouse Of Horror. You can expect another trio of horribly funny shorts. The Ned Zone is a take-off of Stephen King’s Dead Zone. Ned is hit by a bowling ball thanks to Homer’s trademark carelessness. Now he can see people’s deaths. What’s worse, he knows he has to kill Homer before he blows up the city. Four Beheadings And A Funeral takes us back to 18th century London where Lisa is a Sherlock Holmes figure with Bart her sidekick. They have to solve a series of ghastly murders, and Homer is the number one suspect. Finally, In The Belly Of The Boss we get a Fantastic Journey spoof. Maggie ends up shrunken and swallowed by Burns. Homer leads the family on an expedition inside Burns’ body to retrieve her.

Sleeping With The Enemy finds Marge spending too much time with Bart’s buddy Nelson. Lisa and Bart appear to be slipping away, so Marge needs to find an outlet for her maternal instincts.

She Used To Be My Girl is a spoof of It’s A Wonderful Life…sort of. It could have been a wonderful life for Marge. When she runs into an old school friend who is now a successful and popular journalist she wonders what life might have been like if she had taken that path instead of staying with Homer. Meanwhile her friend tries to steal Lisa’s affections because she sacrificed something herself to make it big.

Homer And Ned’s Hail Mary finds Homer very popular with athletes when one of his taunts is filmed and spread on the internet. Now he runs a clinic for athletes who want to get the attention that score dances and taunts will bring them. This one makes our highlight reel and includes the voices of athletes Warren Sapp, Tom Brady, Michelle Kwan and LaBron James.

On A Clear Day I Can See My Sister finds Gary Busy narrating an instructional video on restraining orders. That’s because Lisa has finally had it and gets a restraining order on Bart. He ends up going wild in the yard because it’s the only place he can sleep that’s 200 feet away from Lisa.

Mobile Homer finds Homer in another near-fatal accident this time involving a spider in the garage. It causes Marge to worry about her own financial security when “the big tuna goes belly-up”. Unfortunately, Homer is uninsurable. Where is Obamacare when you really need it? So Marge starts to cut back on expenses for a nest egg jar that Homer steels to by an RV. Could Homer and Marge be splits for real?

Future-Drama gives us a peek into Bart and Lisa’s teen years. The professor has a machine that lets you see the future on a big screen. Needless to say, both are shocked by what they see. Is it too late to change it? Probably so.

Don’t Fear The Roofer stars Ray Romano as a roofer Homer befriends when it appears no one else cares about him. But is he real or just a figment of his imagination? The episode also stars the voice of Stephen Hawking.

Each episode of The Simpsons is presented in its original full frame broadcast format. The whole thing looks about as good as it could. Colors are bright and cheerful. Detail is something you won’t believe possible in cartoons. This will blow you away even if you’ve seen them on HD television. The intro sequences do not hold up under high definition. It appears these had not yet been updated as they would be when the broadcasts went to HD. Black levels are very deep and allow pretty solid contrast.

The set’s audio is provided through a DTS-HD Master Audio 5.1 track. The dialog sounds perfectly sharp and comes through clearly from the front. The music is well balanced in the mains, always coming in at the appropriate volume for the mood. As would be expected with a TV disc set, the use of surrounds is sparse – the rears seem to be reserved for the exclusive use of the opening musical segment. However, let’s not forget that a huge part of what makes The Simpsons great is the voice-acting and the orchestra, both of which sound great.

There is an Audio Commentary on every episode.

There are also deleted scenes, sketch galleries and three bonus episodes from other seasons.

Greetings Junior Scientists: (2:35) This is Matt’s traditional greeting, a quick peek at what the season has to offer.

Living In The Moment: (3:38) Two shorts that are really promos for a Simpsons app.

Live…It’s The Simpsons: (36:00) It’s a table read for an episode, but you don’t see the cast. The screen contains a scrolling copy of the script you can follow.

By the 16th season the writers of The Simpsons have really stepped up their attacks on Fox. Of course, they don’t like the less biased news reporting that elsewhere falls all over themselves for the liberals. They appear ungrateful that Fox has given them decades of doing what they like to do and has made all of them filthy rich. Hey Matt, how does it feel to be a 1%er? Remember now, you didn’t actually do it. It wasn’t your skill, talent or hard work that made the Simpsons  hit, was it? There’s still plenty of Simpsons out there in standard definition, and more will be coming to HD soon.  “I didn’t need any special powers to know that was coming.”

Gino Sassani is a member of the Southeastern Film Critic's Association (SEFCA). He is a film and television critic based in Tampa, Florida. He's also the Senior Editor here at Upcomingdiscs. Gino started reviewing films in the early 1990's as a segment of his local television show Focus. He's an award-winning recording artist for Omega Records. Gino is currently working on his 8th album Merchants & Mercenaries. Gino took over Upcomingdiscs Dec 1, 2008. He works out of a home theater he calls The Reel World. Favorite films: The Godfather, The Godfather Part II, The Body Snatcher (Val Lewton film with Karloff and Lugosi, not the pod people film), Unforgiven, Gladiator, The Lion King, Jaws, Son Of Frankenstein, The Good, The Bad And The Ugly, and Monsters, Inc.
Samson & Delilah Sweet Summer Sun – Hyde Park Live (Blu-ray)