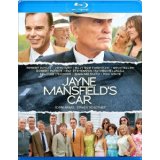 Before Billy Bob Thornton became best known for icky PDA and wearing his wife’s blood around his neck, he burst onto the moviemaking scene as an Academy Award-winning triple-threat with Sling Blade, which he directed, wrote and starred in. (I feel like it’s finally safe to bring up Billy Bob’s acting career again.) Despite working steadily as an actor — and even directing a few other films — the Thornton who won an Oscar for writing Sling Blade has been largely absent from moviegoers’ lives. That’s why it was such a delight to see him return to southern-fried form as a filmmaker with the terrific ensemble drama Jayne Mansfield’s Car.

The film is set in Morrison, Alabama in 1969, during the height of protests against the Vietnam War. We meet the well-to-do Caldwell clan, led by the cantankerous Jim Caldwell (Robert Duvall). His four adult children (played by Billy Bob Thornton, Kevin Bacon, Robert Patrick and Katherine LaNasa) all live in town, along with their own assorted spouses and children. The Caldwells gets a jolt when they find out their mom (and Jim’s former wife) Naomi has died. (Tippi Hedren filmed scenes as Naomi, but was cut out of the movie. Unfortunately, those scenes don’t appear on this disc.)

Naomi had left Jim more than 20 years earlier and remarried a posh Englishman named Kingsley Bedford (John Hurt). (With a name like “Kingsley Bedford,” he’s gotta be posh.) Kingsley travels to Alabama with his own two adult children (played by Ray Stevenson and Frances O’Connor) to bury Naomi. A lesser movie would’ve had the two families at each other’s throats throughout 80 percent of the film before they begrudgingly came to respectful understanding. Instead, some of the Caldwell and Bedford children take an immediate shine to each other, while the two imposing patriarchs share a mutual respect and find they have more in common than they ever imagined.

The time in Jayne Mansfield’s Car winds up being more significant than the place. (The movie doesn’t ignore race relations, but it certainly doesn’t emphasize them as much as you’d expect from a movie set in 1969 Alabama.) Not only does the specter of the Vietnam War hang over the sunny proceedings, but the film’s setting makes it possible for each of Jim’s adult sons to bear the scars of fighting (or, in one case, not seeing much action) in World War II. (Jim himself is a World War I vet.) If we’re being technical, not much “happens” in Jayne Mansfield’s Car from a plot perspective: the Bedfords arrive in Alabama, the two families bury Naomi, and the Bedfords are forced to hang around town for a bit while one of them recovers from an injury. That’s pretty much it.

However, the film succeeds because it’s a thoughtful, sharply-observed, and quirky character study about fathers and sons (“Daddies are daddies. They’re always yelling and saying s—“) as well as new vs. old (“You’re a pompous dinosaur who’s outlived his time.”) Jim certainly clashes with his children — particularly Bacon’s Vietnam War protester Carroll — but the movie also shows them struggling to be good fathers themselves. (Carroll and Robert Patrick’s Jimbo each have rebellious sons of their own.) The movie clocks in at 122 minutes, and Thornton is admirably patient with his staging of scenes; he allows moments to breathe, even when they’re a bit awkward. Thornton also wants to make a point about the way people romanticize tragedy, so there’s a sequence where Jim and Kingsley visit the titular vehicle. Still, I don’t think that’s a good enough reason to justify co-opting Jayne Mansfield’s untimely death for the title of a movie.

Not surprisingly, Thornton’s script — written with Tom Epperson, who previously teamed with Billy Bob to write One False Move, A Family Thing and The Gift — is incredibly generous with every actor in this impressive ensemble. Thornton himself gives a great, deadpan performance as wounded man-child Skip. Even though he fought in WWII and obviously traveled the world, Thornton makes you believe Camilla Bedford’s (O’Connor) English accent in the most exotic thing in the world. This film also serves as a helpful reminder that Robert Duvall is one of our greatest living screen actors. Duvall is obviously a towering presence — Bacon is a good actor, but Duvall makes him seem almost inconsequential when they’re on screen together — but he’s equally good in smaller moments, like the patient tone he takes when dealing with Skip and the way he mutters “Yeah” at the end of practically every sentence, almost as an afterthought. He also finds a worthy screen partner in Hurt, who may not be as showy as Duvall, but is equally formidable.

Of course, you expect Thornton, Duvall and Hurt to be really good, but the rest of the cast is populated with actors sinking their teeth into characters with uncommon depth. Stevenson cuts a strapping figure as always, but his Phillip is eventually made to look and feel rather small. I hadn’t heard of Katherine LaNasa before this movie, but I’ll certainly keep an eye out for her now. Her vivacious energy as Donna is especially welcome compared to the males’ varying degrees of psychological pain. Comedian Ron White also deserves a shout-out for his hilarious turn as Donna’s loutish husband and the last guy you want to get stuck talking to at a party.

I’ve barely mentioned the fact that this movie is also very funny. The mixture of comedy and serious drama is typified during a tense sequence involving LSD and a hunting trip gone awry. Thornton balances these tones as deftly as he handles his talented, sprawling cast. Here’s hoping Billy Bob doesn’t wait almost 20 years to make another great movie again.

Jayne Mansfield’s Car is presented in an aspect ratio of 2.35:1. The 1080p image is arrived at with an AVC MPEG-4 codec at an average of 21 mbps. The Blu-ray offers an image with a warm palette and vivid colors during outdoor sequences. There’s also an ever-so-slight softness in certain medium shots that brings the late 1960s period to life very convincingly. (The movie was filmed in Georgia.) It’s a solid, textured HD image that might’ve been a bit more distracting if it’d been much sharper.

The Dolby TrueHD 5.1 track makes its presence known right away. Owen Easterling Hatfield’s spare score reverberates throughout the entire sound field during the opening credits and the few times it pops up again. In a few instances, it was right on the cusp of being overbearing. There’s also a nice sense of immersion during dynamic scenes of anti-war protesters in the streets and an outdoor pool party. Dialogue comes through pretty clearly, which is important for any talky drama, but is especially key when you have dueling Southern and English accents.

Jayne Mansfield’s Car — Behind the Scenes: (9:13) Cast members, including Stevenson, Patrick and Bacon, discuss what attracted them to project. (Before he had a chance to read the script, Stevenson got a telephone pitch from Thornton, who explained the entire movie.) Thornton himself pops up to talk about the movie’s themes and how tragedy and humor are closely related in the South. Slightly better than your average “Making of”, but not essential. Presented in HD.

This is the sort of low-key, ensemble character study that doesn’t have a prayer of getting more than a few hundred screens for its theatrical release. The good news is a terrific dramedy like this one probably plays even better on home video anyway. The Blu-ray presentation from Anchor Bay certainly does the time period justice. More importantly, watch Jayne Mansfield’s Car for a reminder of just how talented Thornton is and why he became a star in the first place.