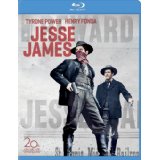 One of the best things about the last decade’s arrival of high definition and Blu-ray is the chance to revisit classics. Often these movies have only been seen on late shows where they’re cut to pieces. The DVD releases have often been less than spectacular because of the presumed limited audience. Fox has done a pretty solid job over the years of bringing these classics to Blu-ray. This year is no exception, and if you have a classic film buff on that list of yours, and you know what list I’m talking about, why not deliver such greats as Henry Fonda, John Wayne, Spencer Tracy, Katherine Hepburn, Rock Hudson or Tyrone Powers to them. They make excellent Christmas guests, and they won’t hog up all of the eggnog.

Fonda plays the famous Frank James, brother to Jesse and leader of the infamous James Gang. There were two films. Jesse James was the first and was really an attempt to get the story right. Of course, this is Hollywood, and the characters are brought to us larger than life. This was also not terribly long after the actual events of the story, and Jesse’s granddaughter signed on as a consultant for the film. Jesse is played by Tyrone Power and is played more like the cult hero Hollywood has traditionally made the character. Even the granddaughter thought Power had not portrayed the cold-blooded killer Jesse really was. The film was also noted for its early use of Technicolor and the rather beautiful vistas the cinematography displayed. John Carradine plays the infamous Robert Ford, who shot Jesse in the back. Another notable horror actor, Henry Hull, also rounds out a wonderful cast. Unfortunately, the film has been remembered less for these performances than the death of one of the stunt horses that went over a cliff during filming. This was actually the incident that brought about those disclaimers that end many films since that no animals were harmed during the shooting.

Tyrone Power has been plying his trade as a pirate in the waters near Jamaica. When his former captain becomes the governor of Jamaica, Power goes straight. He has his eye on Maureen O’Hara, who is engaged to a duplicitous aristocrat who is feeding information to unreformed pirate George Sanders (utterly unrecognizable in shaggy red hair and beard). There will be many complications before Power can claim the resisting O’Hara as his own. Compared to the Errol Flynn pirate movies Captain Blood and The Sea Hawk, this one is a bit light on the action, really only getting down to the buckling of swashes in the final act. The romance between Power and O’Hara is a bit difficult to take in this day and age as well, especially in the first part of the film as it dances into rape-fantasy territory. But be that as it may, this is still a first-class adventure.

Spencer Tracy arrives in the research department of the “Federal Broadcasting Company” to install a computer. He is sworn to secrecy by the president of the network, however, and sorehead Katherine Hepburn and her co-workers assume they are to be made redundant. Sparks are clearly flying between her and Tracy, however, even if this romantic tension remains very much an undercurrent to their witty banter. Also on the scene is Gig Young, Hepburn’s rather callow and thoughtless current romantic interest.

The plot is wafer thin, threatening to evaporate if exposed to direct light, and the romance aspect is almost TOO understated. But what you do have is engaging chemistry of the stars, and a full-on comic performance from Hepburn. The scene of the icy rooftop picnic, where Hepburn’s voice becomes more and more quavery with cold, is priceless.

The Civil War has just ended. In fact, John Wayne leads a Union assault on the Confederacy three days after the surrender — it takes that long for the news to reach him. Disgusted by broken promises, Wayne heads for greener pastures in Mexico, as does former Confederate colonel Rock Hudson. Their paths inevitably cross, and they become allies against forces that threaten both.

This film is actually a retelling of the popular opera. The actual music is taken from the traditional opera, and new words were supplied by Oscar Hammerstein II. The setting is moved to contemporary times (1950’s) and an Army base. Troubled actress Dorothy Dandridge plays Carmen. She’s a troubled woman who has her eyes on Joe, played by Harry Belafonte. Of course, she’s trouble and ends up bringing the naive soldier down. The film as somewhat prophetic in that Dandridge ended up living a troubled life very much as Carmen does here. And while she did not end up the victim of a homicide, she did end up overdosing on barbiturates.

Even though Belafonte was known for his own golden voice, both of the leads were replaced by other singers for the songs here. The new voices match close enough, and it’s likely the result of the kind of music and not a reflection on either actor’s abilities.

Gino Sassani is a member of the Southeastern Film Critic's Association (SEFCA). He is a film and television critic based in Tampa, Florida. He's also the Senior Editor here at Upcomingdiscs. Gino started reviewing films in the early 1990's as a segment of his local television show Focus. He's an award-winning recording artist for Omega Records. Gino is currently working on his 8th album Merchants & Mercenaries. Gino took over Upcomingdiscs Dec 1, 2008. He works out of a home theater he calls The Reel World. Favorite films: The Godfather, The Godfather Part II, The Body Snatcher (Val Lewton film with Karloff and Lugosi, not the pod people film), Unforgiven, Gladiator, The Lion King, Jaws, Son Of Frankenstein, The Good, The Bad And The Ugly, and Monsters, Inc.
Teen Wolf: Season Three, Part 1 Touchy Feely (Blu-ray)