Posted in: Disc Reviews by Brent Lorentson on December 19th, 2013 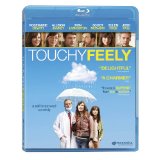 “Think of it as a hall pass, a permission slip to just let go of your fear and embrace the world…”

These are the words of advice a reiki master, played by Allison Janney (The West Wing) says to her patient, Abby (Rosemarie DeWitt) as she is handing her a bag filled with MDNA.  Touchy Feely is definitely an offbeat comedy from writer/director Lynn Shelton who may be best known for her indie hit Humpday. At first glance the film may come across to some as some New Age, hippy, nonsense journey about self-discovery, and to a point you’d be right, but really, the themes of self-discovery are universal with everyone, and it’s in these types of films I feel everyone can at least attain a nugget of introspective wisdom after watching.

The film follows a brother and sister who seem to be at a crossroads in their lives.  There is Abby, who is a massage therapist, who is in a relationship with a younger man, and she is starting to have difficulty having physical contact with people, the sight and touch of skin repulsing her.  Of course, being a massage therapist and being in a relationship, this complicates her life.  As for her brother Paul (Josh Pais) he’s struggling to raise his daughter Jenny (Ellen Paige) while trying to run his floundering dental office.  But for Paul things seem to be making a change for the better as his patients seem to be healed from their dental woes after sitting in Paul’s chair.

Seeing as the brother and sister simultaneously seem to swap positions as they open up to different experiences we watch as they rediscover their lives, and Abby gets the chance to appreciate the relationship she has before pushing it away.

The performances are what keep this film going.  After hearing in the commentary as well as the bonus features how much director Lynn Shelton enjoys having her actors adlib, for me it felt like the actors gave more genuine performances considering the lines came from within them and not just the writer.  The most chemistry I felt was between Janney and Pais, in the scenes where Paul decides to give reiki a try.  Unfortunately there are only a handful of moments with them together, and I wish this relationship was more fleshed out, but there is only so much you can throw into a film like this.

So what is this reiki thing I keep mentioning? Well, from what I understand it’s a type of healing therapy where a reiki “master” places their hands over an individual and helps heal their energy.  Giving the movie a shot may work as its own little healing session for those experiencing a void during this holiday season if they are looking for a film with an uplifting message that doesn’t leaving you feeling as though it’s been beaten into your subconscious.

Touchy Feely is presented in the aspect ratio of 1.78:1.  The 1080p image is arrived at with an AVC MPEG-4 codec with an average of 30mbps.  This is an independent film, so the budget didn’t allow much in the way of sweeping camera movements and elaborate production designs.  Instead what we get with Touchy Feely is a very digital look, but not the digital we’ve come to appreciate with the Phantom cameras or the Red.  Though the images are sharp with little distortion, the film appears to be shot with a pro/consumer camera.  But with this type of film we’re not expecting lavish visuals to tease our ocular membrane.  The color palette is fairly drab throughout with very little warmth.  Just about the only scenes where I’d imagine the Blu-ray was effective are in the sequences when Abby has her freak-outs when looking at the skin where we see every crack and pore in the skin and it has almost an alien look.  For this release, dial back your expectations on the visuals and just enjoy the story.

The DTS-HD Master Audio 5.1 track is a fairly simple mix.  With this being mainly a talking-heads film, the 5.1 mix is never given the opportunity to shine.  Though the film is filled with scenes of dialog, all the performances can be clearly heard.  The soundtrack that plays over the film, composed by Vinny Smith, is subtle and very unobtrusive to the point it’s hardly recognizable, and I easily mistook it for simple ambient noise.  For what the film is, the track does its job, but this is nothing to crank up and wake the neighbors with.

Audio Commentary:  Writer/director Lynn Shelton, Rosemarie DeWitt and Josh Pais join in on the commentary that turns out to be an enjoyable listen with plenty of behind-the-scenes information and stories about how the film came together as well as the cast.  For those that are fans of Shelton’s work this is definitely worth listening to as she discusses her process with writing and the film.

Out Takes: (4:12) A few scenes cut together where the actors are just having fun together on set and doing alternative takes together.  The scenes with Allison Janney and Josh Pais are the most notable ones.

Deleted Scenes: (6:30) Just some basic scenes cut out from the film, most likely for time.  No lost gems here, just simple fat in the film that needed to be trimmed.

Interviews: (31:51) With this option you have the choice to play all or choose the interview of your choice.  Allison Janney, Scott McNairy, Josh Pais and writer/director Lynn Shelton each offer up plenty of insight about their involvement on the film and what brought them in to work on the project to begin with.  It’s a fairly standard bonus with information you’ll hear in the commentary.

Axis TV A Look at Touchy Feely (3:02): Pretty much just an extended trailer for the film that aired on Axis TV.

As a little independent film this turned out to be better than expected and has me keeping an eye out for future projects Shelton will be working on.  For many the New Age backdrop may be a bit of a distraction, but movies are meant to be a distraction and allow us a chance to see things outside our comfort and belief zone.  I wouldn’t quite open my wallet and add this to my collection, but it’s definitely worth a watch.

Brent Lorentson is a horror writer and film critic based out of Tampa, Florida. With a BA in Digital Film, he co-wrote and co-directed Scavenger Hunt. His short stories have appeared in various horror anthologies. In 2019 his short script Fertile Blood will be a part of the anthology horror film Slumber Party. He is currently working on his first novel A Dark and Secret Place set to be released in late 2019. Favorite Films: Taxi Driver, Fight Club, I Saw the Devil, The Wild Bunch, Dawn of the Dead, A Clockwork Orange, Pulp Fiction, Heathers, The Monster Squad, and High Fidelity.
Gift Guide Spotlight: Fox Movie Classics On Blu-ray Saving Mr. Banks