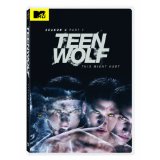 Is it me or is Beacon Hills turning into more like a beacon for the totally bizarre and supernatural?”

Fox has begun releasing the series in half season sets. I can’t say I’m a fan of the choice, but I almost understand the logic here. The series has expanded to more episodes, closer to a normal network run number. There is also now a several-month break between the season halves, much like USA network has treated such shows as Monk and Psych. One the one hand it’s annoying to have incomplete season sets on my shelf. On the other it saves fans from having to wait that much longer to get their hands on these episodes. Whatever your own take on this development, it is the reality nonetheless.

If you’re a fan of the 1985 comedy staring Michael J. Fox, that statement is particularly appropriate. We all remember the cute high school romp where Michael J. Fox discovers that his family has been hiding a long dark secret. They are werewolves. Now the young teen finds himself having to deal with the usual growing pains of adolescence on top of dealing with the family curse. Before long he’s a basketball star and the most popular kid in school. A fun time was had by all. The film spawned a sequel with Jason Bateman and an animated series on television. It was all a hoot.

The cast is made up of some of the most solid young actors on television. There is real chemistry here between them all, particularly between Tyler Posey and Crystal Reed who play Scott and Allison respectively. I get the sense that the actors might be as into each other as their characters. If not, it’s quite an amazing performance. Tyler Hoechlin has the requisite brooding character as Derek. Holland Roden plays Lydia, and she’s evolved from the requisite stuck-up pretty girl in the group. Dylan O’Brien gets to be the goofy comic relief as Stiles. Together they play off each other quite nicely.

The third season doesn’t completely pick up where the second left off. Some time has passed, and there is going to be little mention of the creature or the character of Jackson. Of course, actor Colton Haynes has now left the show to join the CW’s Arrow. There are some continuing elements, however. We were teased at the end of season 2 that there was an entire pack of Alphas coming, and we knew then they were going to be trouble. Guess what? They’re here, and yes, they are.

There are actually three intertwined threats and issues to this season. The first is obviously the Alpha pack. It turns out that when an Alpha kills his pack members he absorbs their strength. Enter Deucalion, played by Gideon Emery. He’s blind but is the super alpha of the group. He’s trying to get Derek to kill his own pack and join his group. He will remind you very much of Klaus from The Vampire Diaries. Both have this ideal of creating the perfect super pack of creatures.

The second threat is new Beacon Hills teacher Jennifer, played by Haley Webb. She’s an entirely different kind of creature. She too is trying to consolidate her power, but through a strange series of Druid sacrifices. These deaths bring the attention of the FBI and eventually Scott’s estranged father. That’s a plot that’s never really developed here. One suspects it’s being built up for the next run of episodes, at least I hope so. Otherwise it’s a waste of time.

Finally, there’s the return of Peter Hale, played by Ian Bohen. He spends much of these episodes helping to counter the other threats, but don’t be taken in. We know he’s got an agenda of his own, and it’s going to be played out in future episodes.

There are some standout performances this season. Of course, Crystal Reed continues to be the best of the lot. She doesn’t get to kick as much butt this time, but I just love how much this character and actress have evolved over these first three years.

Seth Gilliam gets to have much more to do as Dr. Deaton. We are getting to know him and his mysterious past a lot more this season. He’s always been the kind of go-to guy in the past, but he’s taken far more of a proactive lead this season. You’ll love where the character is going and Gilliam’s ability to take him there.

Gideon Emery is the best villain the show has produced so far. That’s because he’s not a straight bad guy. No villain actually thinks of themselves as bad, and nowhere is that more skillfully played out than Emery’s portrayal here. We’ve all heard about the road to Hell being paved by good intentions. Let’s just say that this guy has himself an interstate-sized construction project going on here.

Hats off to Holland Roden who really expands the character of Lydia. Honestly, I thought she was very annoying the first two seasons. I’ve warmed up to her considerably now. She also gets a couple of powers this season that allow her to be more of an active participant. She has a banshee scream and a little psychic power going for her. We’re still not quite sure what she is, but it’s not natural.

The season is about having strange allies and that whole enemy of my enemy idea going on. I like the idea of multiple threats, but there is a little character overload going on this season. It gets hard to keep up with everyone. You have Jennifer and Deucalion, but you also have all of the members of this Alpha pack to deal with. The standout here is the introduction of the Desperate Housewives twins Max and Charlie Carver as a twin werewolf. In human form they are separate, but they become a kind of Wonder Twins super werewolf, combining their bodies into one creature.

We learn some new things about werewolves in season three. We discover they can’t get a tattoo without using a blowtorch. A total lunar eclipse leaves them powerless. Also, for your holiday pleasure they do some pretty funky things with mistletoe.

Pretty much all of the episodes feed the new story arc. It’s quite fast and furious at times. Fortunately, there are a couple of episodes that do slow things down for us and give us something different. We get some nice flashbacks and learn about an early love of Derek’s. She was a cello player…hey, I can relate. There’s also an episode that appears to be about a haunted motel that takes us out of Beacon Hill and helps to work out some of the bonds in the series.

Extras on the release include a couple of deleted scenes, a gag reel and another one of those idiotic shirtless montages. There’s a Back To The Pack piece that gives us a summary of the first two years in about 40 minutes. It aired as a season setup on MTV.

The end of these episodes is not so much a cliffhanger, although there is a setup for some things to come. There are more baddies coming…lots of them. I suspect the show is going to take on a Supernatural look in the episodes to come. There are all sorts of demons and creatures on the way. “It’s like Werewolf Thunderdome.”

Gino Sassani is a member of the Southeastern Film Critic's Association (SEFCA). He is a film and television critic based in Tampa, Florida. He's also the Senior Editor here at Upcomingdiscs. Gino started reviewing films in the early 1990's as a segment of his local television show Focus. He's an award-winning recording artist for Omega Records. Gino is currently working on his 8th album Merchants & Mercenaries. Gino took over Upcomingdiscs Dec 1, 2008. He works out of a home theater he calls The Reel World. Favorite films: The Godfather, The Godfather Part II, The Body Snatcher (Val Lewton film with Karloff and Lugosi, not the pod people film), Unforgiven, Gladiator, The Lion King, Jaws, Son Of Frankenstein, The Good, The Bad And The Ugly, and Monsters, Inc.
Mischief Night Gift Guide Spotlight: Fox Movie Classics On Blu-ray