Posted in: No Huddle by Brent Lorentson on December 18th, 2013 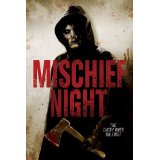 Just when I thought the home invasion genre was on its last legs, another addition to the oversaturated canon of films has been released on DVD.  Don’t get me wrong, I’m a fan of the genre, but like everything else in Hollywood once something works and is a success the first time the only reasonable thing to do is exploit it till there is nothing unique or fresh with the idea, and then try to exploit it some more.  Entries into the genre like Funny Games, The Collector, The Strangers and even Panic Room all have a soft spot in my genre-obsessed heart, but seriously, enough already.

The film’s opening follows a cheating couple as their night of passion is interrupted by what they believe are kids simply playing pranks on what the town calls Mischief Night the day before Halloween.  There are the typical jump scares, and it all follows the horror movie formula where we know by the end of the sequence one or both of these characters will be killed, and this of course introduces the film’s featured killer, a masked figure in a bright yellow hoodie.  I’m fine with the film sticking with the same formula that has worked for hundreds of horror films over the years, but what bothered me from the start was the decision to put the killer in a bright yellow top; even at night this would leave the killer sticking out like a sore thumb, and the element of terror and surprise is immediately taken away; at any minute I was expecting organ music to play announcing the killer followed by him creeping through the halls on his tippy toes and snickering as the tormented couple moved through the house not seeing him.

Following the intro-sequence we meet our heroine of the film, Emily (Noell Coet) your regular pretty teenager with the exception that she is blind.  I like the idea of our heroine already having the disability to compete with and the soon to be intruder making her life all the more difficult, but as soon as the film discusses that her blindness is a psychological issue due to a trauma from her past when her mother died, well, you already get the idea that this blindness may not be lasting too much longer.

Where the director could have gone the route of Wait Until Dark and made this a thrilling cat and mouse game between Emily and her intruder, instead we just get uninspired scenes where the killer just stands around in the room with Emily while they kill off a few unexpected guests along the way.

My other complaint involves the house we see in the opening sequence where the cheating couple is killed; it is the same house where Emily and her father (Daniel Hugh Kelly) live.  I’m hoping that perhaps there is a connection between the two events, some reason why this house in particular is being targeted, but nothing is ever explored with this.  For me this just is lazy storytelling.

As for the film on a technical level, here everything is pretty solid. The editing helps give it the edge it needs to at least make this a film that moves along nicely.  Over all this film is a dud; it had the potential to give us a fresh look at a genre that has been exploited the past few years, but instead we got more of the same.

Brent Lorentson is a horror writer and film critic based out of Tampa, Florida. With a BA in Digital Film, he co-wrote and co-directed Scavenger Hunt. His short stories have appeared in various horror anthologies. In 2019 his short script Fertile Blood will be a part of the anthology horror film Slumber Party. He is currently working on his first novel A Dark and Secret Place set to be released in late 2019. Favorite Films: Taxi Driver, Fight Club, I Saw the Devil, The Wild Bunch, Dawn of the Dead, A Clockwork Orange, Pulp Fiction, Heathers, The Monster Squad, and High Fidelity.
Dancing: A Man’s Game Teen Wolf: Season Three, Part 1