Posted in: The Reel World by Brent Lorentson on December 20th, 2013 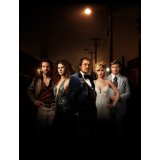 “Some of this actually happened.”

It’s the quote that opens a film that I don’t just consider the most enjoyable experience on the big screen this year, but one of the best films to be released in years.  It’s a comedy, it’s a love story, it’s all a giant con wrapped in the world of the mid 70’s that David O. Russell captures with flare and detail and often at times feels as though it could be a sister film to Goodfellas.  By no means is this a gangster film (although the mob is present), but this is a film about characters who are all trying to do the right thing only the method by which they go about accomplishing the task is morally questionable.

The film wastes no time thrusting us into the middle of the con where Irving and Sydney (Christian Bale and Amy Adams) with the aide of FBI Agent Richie DiMaso (Bradley Cooper) are trying to convince Mayor Carmine Polito (Jeremy Renner) to take a bribe.  The details at this point don’t matter; this is just O. Russell setting the tone of what’s to come, and only a few minutes into the film we’ve already been given perhaps one of the most memorable opening sequences since the opening of Pulp Fiction.

As Irving takes over the narration we are introduced to him as a young boy, and he’s already scheming and breaking windows in order to help his father’s glass business.  But little time is wasted here as the narration jumps ahead to the party where Irving and Sydney first meet and not long after he decides to literally make her his partner in crime.  Watching the two play off one another is worth the price of admission alone; is it true love, or is it all one giant con? Who’s to say, and that just made me want to watch them even more.  Just as we’re starting to think that perhaps it’s true love for these con artists, we discover Irving has a wife at home, Rosalyn (Jennifer Lawrence), who just may be the most painfully obnoxious housewife on screen in years if not decades.

DiMaso early on takes Irving and Sydney down in a sting and is willing to cut a deal with them so long as they help him take down four high profile marks of his choosing.  Cooper has always been a mixed bag for me, but in this film he’s just so much fun to watch, and we really get to see his comedy chops shine.  Seeing him spar with Louis C.K. who plays his superior with the agency is one of the film’s great running gags involving an ice fishing story.

As the con starts to take shape it is revealed that this is the O. Russell take on the ABSCAM operation, which dealt with the corruption of political officials during the 70’s and early 80’s.  Going into the film the less you know the better; just like the classic con-films of the past The Sting and Gambit, the twists are what make the film shine, and upon re-watching it’s a delight catching all the nuances and seeds planted for future twists.

There are so many terrific performances throughout, it’s impossible to pick a favorite, but Amy Adams simply oozes sex appeal in her 70’s attire throughout.  But then I think about the physical transformation Bale made to embody the overweight, balding character of Irving; it’s reminiscent of the days when DeNiro would immerse himself in a role.

For those music lovers out there, this may be one of the best collections of songs put together in a film in years as well.  “Goodbye Yellow Brick Road” just fits so perfectly as it plays over the sequence when all the couples come together for the first time.  It’s haunting and simply adds to what develops into one of the best sequences in the film.  Then there is the perfect placement of “Live and Let Die” as Rosalyn sings and cleans throughout the house and we begin to see her true colors.

American Hustle is rich with great characters and sharp witty dialog and simply sucks you in from start to finish.  David O. Russell has achieved his masterpiece and has come a long way since he emerged from the indie film world with Spanking The Monkey and Flirting With Disaster. This is a film that in time people will find themselves quoting and debating over what scenes are the best.  This isn’t just my favorite film over the year, but I’m going to also say that this is the best picture of the year.

Brent Lorentson is a horror writer and film critic based out of Tampa, Florida. With a BA in Digital Film, he co-wrote and co-directed Scavenger Hunt. His short stories have appeared in various horror anthologies. In 2019 his short script Fertile Blood will be a part of the anthology horror film Slumber Party. He is currently working on his first novel A Dark and Secret Place set to be released in late 2019. Favorite Films: Taxi Driver, Fight Club, I Saw the Devil, The Wild Bunch, Dawn of the Dead, A Clockwork Orange, Pulp Fiction, Heathers, The Monster Squad, and High Fidelity.
Saving Mr. Banks Ghost Team One (Blu-ray)