Posted in: Disc Reviews by Brent Lorentson on December 22nd, 2013 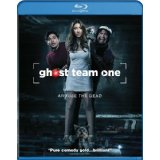 Unless it’s the Zucker brothers or Mel Brooks, I wouldn’t ever consider myself a fan of parodies.  But every once in a while, one will come along that can squeeze a few chuckles out of me.  The found footage and reality genre has saturated the market, and it was only a matter of time before a filmmaker decided to lampoon the genre.  Ghost Team One takes on the genre, and instead of taking the easy route and simply spoofing what’s already been done, the film makers actually made the effort to mold a decent story and film it in the style the Paranormal Activity films have made popular, only Ghost Team One does so with its tongue planted firmly in its cheek.

Roommates, Sergio (Carlos Santos) and Brad (J.R. Villarreal) decide to start documenting everything that is going on in their apartment after Sergio believes he had an encounter with a ghost.  Armed with Gopro and other digital cameras, the two embark on trying to acquire proof on camera.  Sergio does what he can to try and take this seriously, while Brad continues to derail the experiment with his oversexed antics that consist mostly of him violating the camera or those around him on camera.  But once the two meet Fernanda (Fernanda Romero), a true believer in the supernatural, the guys buckle down to try to impress her.

Sure, the plot is silly, and those involved clearly know how outrageous this all is, but surprisingly it works.  I’m not saying this film will go down as anything groundbreaking or be remembered for years to come, but there are plenty of genuine laughs to be found throughout.  What also makes this work is this feels more genuine than most of the found footage films out there.  The constant jokes where people just have the most difficult time taking the situations seriously had me feeling this would be how my friends and I would react if in the same situation.

As the film comes to its conclusion things do start to get a bit too far over the top, but considering it still managed to maintain its sense of humor, it’s easy to forgive them going a bit overboard.  After all, it’s better to have a crazy over-the-top payoff than most of the run-of-the-mill endings we get with these types of films.

Ghost Team One is presented in the aspect ratio 1.78:1.  The 1080p image is arrived at with an AVC MPEG-4 codec at an average of 34mbps.  Considering the film is supposed to look like it is done by amateurs that don’t know much about cameras and lighting, the film succeeds in looking rough.  Bad lighting and blown out images fill the film from start to finish.  We get shaky cam footage as well, and then what would a ghost-hunting film be without the green night vision shots.  The black levels do allow for some definition, but what bothered me the most was at times the film never seemed white balanced properly, so the flesh tones seemed to be all over the place. For those who are cinema purists this film may drive you nuts in how bad it looks at times, but at the same time it stays true to the genre.  When we do get the few-and-far-between decent footage the image is sharp, but we are always aware of the handheld nature and amateur quality throughout.

The DTS-HD Master Audio 5.1 track suffers from the project being on a low budget.  There is no booming score or detailed ambience here, and because of this it is a constant reminder that we are watching a low budget feature.  The dialog though is clear throughout.  There are a few select moments when paranormal events are taking place where they cleverly use the sound effects they had at their disposal.  Because of the sub-genre of the film, the filmmakers can get away with many of these faults, but at the same time these shortcomings do affect the end product.

Deleted and Extended Scenes: (13:35)  There are a few amusing moments here, but really it’s clear these moments were cut in order to make a leaner film.

Chuck’s Video Diary: (7:09) This is actually an amusing feature involving Sergio and Brad’s sober roommate and his video diaries where he discusses many of his drug-induced indiscretions.

Blooper Reel: (3:03) Your standard blooper real, one of those things that’s never as funny as we hope it will be.

Behind The Scenes: (6:23)  This feature the filmmakers try to do something at least a little different and shoot the BTS footage from Chanel, the dog’s perspective.  Most of the time, though, is spent showing how they shot the ghost sex scene.  It’s a short feature, but it’s better than nothing.

Considering that the found footage and reality horror genre seems to be the in thing to do, it was only a matter of time before a spoof came along.  Thankfully this is a fun, naughty romp that is best suited for late night viewing while enjoying a few drinks with friends.  It’s not a classic, but not everything needs to be.

Brent Lorentson is a horror writer and film critic based out of Tampa, Florida. With a BA in Digital Film, he co-wrote and co-directed Scavenger Hunt. His short stories have appeared in various horror anthologies. In 2019 his short script Fertile Blood will be a part of the anthology horror film Slumber Party. He is currently working on his first novel A Dark and Secret Place set to be released in late 2019. Favorite Films: Taxi Driver, Fight Club, I Saw the Devil, The Wild Bunch, Dawn of the Dead, A Clockwork Orange, Pulp Fiction, Heathers, The Monster Squad, and High Fidelity.
American Hustle Cliff Richard: Still Reelin’ and A-Rockin’ (Blu-ray)