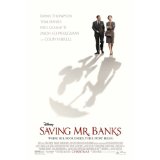 You already know Mary Poppins is one of the most beloved movie musicals of all time. But did you know it also holds the record for most Oscar nominations (13) and wins (5) for a movie released by Walt Disney Studios? Audiences…critics…everybody loves Mary Poppins, right? Well, unless you follow movie history pretty closely, you may not know the film had a famous, formidable critic in P.L. Travers, the author of the “Mary Poppins” book series.

Saving Mr. Banks is at its best when its dramatizing the alternately petty, amusing and emotional struggle between Travers (Emma Thompson) and none other than Walt Disney himself (played by none other than Tom Hanks himself) to bring her creation to the silver screen. The film opens with a familiar bit of narration reinforcing the idea that “what’s to happen all happened before.” We catch up with a reluctant Mrs. Travers (she insists you call her that) in 1961, right before she’s about to travel from London to Los Angeles to decide if she will grant a determined Walt (he insists you call him that) the rights to turn her film into a crowd-pleasing musical. Not surprisingly, the severe, stubborn Travers comically clashes with her collaborators, which include screenwriter Don DaGradi (Bradley Whitford) and legendary songwriting siblings Robert and Richard Sherman (B.J. Novak and Jason Schwartzman).

“You don’t know what she means to me.”

Despite Mrs. Travers’ vehement protestations against animated penguins, Dick Van Dyke and the color red, we all know how things turned out with Mary Poppins. That’s why the biggest surprise in Saving Mr. Banks is the large amount of time it dedicates to showing us Travers’ tumultuous early 20th century childhood in Australia with her impossibly charismatic father (Colin Farrell) and exasperated mother (Ruth Wilson).

These scenes go a long way toward establishing why Travers is so fiercely protective of Poppins. Unfortunately — by their inherently dramatic, downbeat nature — they also have the unavoidable effect of detracting from the fun of the 1960s scenes with Mrs. Travers going head to head with Walt and Co.  The problem isn’t with the quality of the scenes — Farrell’s actually a great choice to play the writer’s rascally dad — it’s with the quantity.

Director John Lee Hancock (The Blind Side, The Rookie) knows how to make a crowd pleaser. However, he dips into the Australia sequences way too often and not with enough purpose. The amount of screen time devoted to Travers’ turbulent childhood could’ve been chopped in half (or more), and I feel like we still would’ve gotten the idea. The only sequence that really works is the one that cross cuts between Mrs. Travers’ dad having a public meltdown and the creation of “Fidelity Fiduciary Bank.” The scene works because it vibrantly connects the Australia flashbacks to the main story. More importantly, it repurposes a piece of Mary Poppins fans have seen 100 times into something fresh and unexpected.

I love movies about making movies. Heck, the moviemaking being chronicled doesn’t even have to be good. (Ed Wood is probably my favorite Tim Burton movie.) Saving Mr. Banks has a fair amount of winks (and double blinks) to its inspiration, and this is where the movie shines. The film also lightly brushes up against some interesting ideas about the extent to which audiences share in ownership of stories along with their creators. Mrs. Travers is rightfully protective of her intellectual property, but Walt brings up a good point when he notes that Mrs. Travers didn’t create Mary Poppins in a vacuum. In other words, a significant part of Mary Poppins also belongs to the millions of adults and children she delighted over the years.

The debate is entertaining and eminently watchable because it’s being played out by a terrific pair of pros like Emma Thompson and Tom Hanks. Thompson gives a vanity-free performance — you can practically feel the pasty Mrs. Travers wilting under L.A.’s relentless sunshine — as the severe, stubborn writer who is also clearly full of love for her creation. During the closing credits, we hear the real Mrs. Travers’ voice over a tape recorder and it really makes you appreciate how perfectly Thompson nailed her haughty cadence. The film admirably keeps her prickly throughout — I mean, she’s even rude to her fellow plane passengers and they’re not even the ones trying to add cheery music to her sad life story — instead of completely Disney-fying the character.

Speaking of which, Hanks gets to tap into his early-career huckster charm to play Walt, the ultimate showman. Since Saving Mr. Banks is a Walt Disney Studios production, I’m not surprised to see this version of Walt protects his magical kingdom just as vigorously as the ostensibly more serious-minded Mrs. Travers. Conversely, the movie takes some knowing swipes at the Disney empire’s sickly sweet reputation (sometimes literally, judging by all the pastries in the writing room) and gives us a version of Walt who isn’t opposed to knocking back a drink or sneaking in a cigarette break when he can. (Disney died of lung cancer in 1966, two years after the release of Mary Poppins). The rest of the cast turns in capable work — Whitford, Schwartzman and Novak aren’t really allowed to be a match for Thompson’s Travers — but Farrell and Giamatti are the only other ones who really get to shine. (It turns out even Mrs. Travers isn’t immune to Paul Giamatti’s schlubby charms as sunny driver Ralph.)

Saving Mr. Banks is dedicated to Diane Disney Miller, who died earlier this year. It’s a poignant turn of events because Walt’s daughters are the ones who inspired his 20-year odyssey to adapt Mary Poppins, which in turn inspired this movie. Saving Mr. Banks winds up being a sweet, very well-made chronicle of a surprisingly tart slice of movie history that would’ve been better served with fewer flashbacks and more glimpses into the vintage days of the Mouse House. Then again, this movie comes from Disney and “no one likes a show-off.”