12 Days Of Christmas Giveaways – Day 1: Spartacus: War Of The Damned On Blu-ray From Anchor Bay 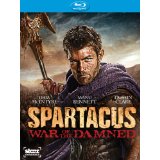 On the First Day Of Christmas Anchor Bay gives to you:

Only one of the best action televisions shows to come along in a very long time. Our wonderful elves down at Anchor Bay have been tampering with our Christmas Tree here at Upcomingdiscs. They’ve left a copy of Spartacus: War Of The Damned on Blu-ray for one lucky Upcomingdiscs winner. It’s the final season of the epic tale with Liam McIntyre and Manu Bennett. With plenty of bonus features and in glorious high definition this is a great prize to kick off our 12 Days Of Christmas Giveaways.

Gino Sassani is a member of the Southeastern Film Critic's Association (SEFCA). He is a film and television critic based in Tampa, Florida. He's also the Senior Editor here at Upcomingdiscs. Gino started reviewing films in the early 1990's as a segment of his local television show Focus. He's an award-winning recording artist for Omega Records. Gino is currently working on his 8th album Merchants & Mercenaries. Gino took over Upcomingdiscs Dec 1, 2008. He works out of a home theater he calls The Reel World. Favorite films: The Godfather, The Godfather Part II, The Body Snatcher (Val Lewton film with Karloff and Lugosi, not the pod people film), Unforgiven, Gladiator, The Lion King, Jaws, Son Of Frankenstein, The Good, The Bad And The Ugly, and Monsters, Inc.
The Wolf of Wall Street 12 Days Of Christmas Giveaways – Day 2: Naked City: 20 Star-Filled Episodes From Image Entertainment