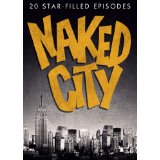 On the Second Day Of Christmas Image Entertainment  gives to you:

Do you know what happens when too many hands start playing with stuff under our Christmas Tree? 12 Days of Christmas giveaways is what happens. Now our good friends at Image Entertainment have gotten into the act with a 5-disc DVD set The Naked City 20 Star-Filled Episodes. You’ve already heard us talk about this groundbreaking series. Image has put together a greatest hits set. We’re talking guest stars like you’ve never seen before: Gene Hackman, Robert Redford, Peter Fonda, William Shatner, Dustin Hoffman, James Caan, Christopher Walken, Robert Duvall, Dennis Hopper and Jack Klugman. They’re all in one place and one lucky Upcomingdiscs winner gets the set.

Gino Sassani is a member of the Southeastern Film Critic's Association (SEFCA). He is a film and television critic based in Tampa, Florida. He's also the Senior Editor here at Upcomingdiscs. Gino started reviewing films in the early 1990's as a segment of his local television show Focus. He's an award-winning recording artist for Omega Records. Gino is currently working on his 8th album Merchants & Mercenaries. Gino took over Upcomingdiscs Dec 1, 2008. He works out of a home theater he calls The Reel World. Favorite films: The Godfather, The Godfather Part II, The Body Snatcher (Val Lewton film with Karloff and Lugosi, not the pod people film), Unforgiven, Gladiator, The Lion King, Jaws, Son Of Frankenstein, The Good, The Bad And The Ugly, and Monsters, Inc.
12 Days Of Christmas Giveaways – Day 1: Spartacus: War Of The Damned On Blu-ray From Anchor Bay 12 Days Of Christmas – Day Three: 2000 Yankees World Series Collectors Edition From A&E