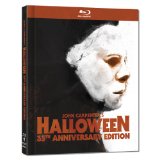 On the Twelfth Day Of Christmas Anchor Bay gives to you:

Back in October we began our 31 Nights Of Terror with a review of Anchor Bay’s 35th Anniversary Edition of John Carpenter’s Halloween on Blu-ray. We thought it fitting that we end our giveaways with the same classic title. It’s the movie that launched an entire genre of film. Thanks to the great guys over at Anchor Bay, we’re able to do just that. Our last Christmas contest is a copy of Halloween on Blu-ray. It’s the same Anniversary Edition we reviewed in October.

Remember: Your answer will not change your chance of winning. It’s totally random so be honest.

Gino Sassani is a member of the Southeastern Film Critic's Association (SEFCA). He is a film and television critic based in Tampa, Florida. He's also the Senior Editor here at Upcomingdiscs. Gino started reviewing films in the early 1990's as a segment of his local television show Focus. He's an award-winning recording artist for Omega Records. Gino is currently working on his 8th album Merchants & Mercenaries. Gino took over Upcomingdiscs Dec 1, 2008. He works out of a home theater he calls The Reel World. Favorite films: The Godfather, The Godfather Part II, The Body Snatcher (Val Lewton film with Karloff and Lugosi, not the pod people film), Unforgiven, Gladiator, The Lion King, Jaws, Son Of Frankenstein, The Good, The Bad And The Ugly, and Monsters, Inc.
12 Days Of Christmas Giveaways – Day 11: Baseball Package Angel of the Skies