Angel of the Skies

Posted in: No Huddle by Brent Lorentson on January 6th, 2014 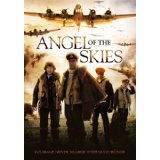 I’m curious if there will ever come a time that people will simply give up making WW2 films.  After all these years you would have figured that every possible story about this time period would have managed to find its way up onto the silver screen.  I have nothing against these war pictures, but the bar has been set so high by films like Tora Tora Tora, Saving Private Ryan, The Longest Day, and many others, that if someone were to tackle the genre, that filmmaker would have to step up their game to be noticed amongst these titans of cinema.

Angel of the Skies is a feature out of the UK that boldly attempts to tackle the story of a pilot and his crew who crash inside enemy lines and have to struggle together to make their escape to return home.  For a low-budget feature, this is a lot to tackle, but what helps is that writer/director Christopher-Lee Dos Santos spends more of his time focusing on his characters instead of grandiose effects and action set pieces.

Captain Earl Kirk (Nicholas van der Bijl) a pilot out of South Africa, is the heart of the story.  He’s got a pregnant fiancée, but despite his young family to be he feels this need to join the Royal Air Force.  He’s a man who lives his life with honor and pride, though it’s hard to sympathize with him since he’s so willing to abandon his family to fight a war that at this time many would feel he had no place being in (though history would unfold to show that in WW2 everyone had a part to play).  As Captain Kirk is off on his mission across enemy lines, his fiancée Lillie (Deborah Caldwell) patiently waits with a heavy heart.  Sure, just the drama of the lovers being separated during this conflict is enough for the story, but it just seemed that Lillie was a wasted character given nothing more to really do than look longingly at a picture and hold her belly.

As Captain Kirk and his crew take to hiding in farmhouses and trek cautiously through the woods to avoid Nazi scouts, this portion of the story thankfully doesn’t let down.  It’s nothing we haven’t seen before, but at least it is executed well enough that it doesn’t drag the film down.

What does hurt the film is the CGI spread throughout the film, most notably when we see the planes in motion.  I understand budget restrains the filmmakers from achieving a big spectacle. This doesn’t make or break the picture by any means, but with this film, the less-is-more approach would have made a greater impact.  The suspense of the pilots and crew preparing for impact is wasted once we see the poorly-executed CGI rendering of the plane crashing into the earth.

For those who are fans of anything and everything war and military-related, this film manages to work on a meager budget despite its ambitious plot.  For those looking for spectacle and a high body count, well, move along, there isn’t much to see here.

Brent Lorentson is a horror writer and film critic based out of Tampa, Florida. With a BA in Digital Film, he co-wrote and co-directed Scavenger Hunt. His short stories have appeared in various horror anthologies. In 2019 his short script Fertile Blood will be a part of the anthology horror film Slumber Party. He is currently working on his first novel A Dark and Secret Place set to be released in late 2019. Favorite Films: Taxi Driver, Fight Club, I Saw the Devil, The Wild Bunch, Dawn of the Dead, A Clockwork Orange, Pulp Fiction, Heathers, The Monster Squad, and High Fidelity.
12 Days Of Christmas Giveaways – Day 12: Halloween (35th Anniversary Edition) From Anchor Bay Voodoo Possession