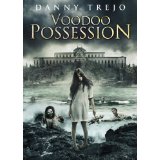 We all know looks can be deceiving, but Voodoo Possession takes that notion to the extreme. Almost nothing about the film’s DVD cover art correlates to what you’ll actually see on screen. Cult favorite Danny Trejo gets top billing despite playing a largely inconsequential role in the story. (You know a movie’s in trouble when it’s banking on Trejo’s star power; even the Machete movies relied mostly on stunt casting.) The cover is dominated by someone who looks like Samara from The Ring standing in front of Shutter Island. (Naturally, the girl has nothing to do with this movie.) At least there is, in fact, voodoo in this occasionally intriguing, ultimately lousy low-budget horror flick.

The film follows Aiden (Ryan Caltagirone), a troubled young man who travels to Haiti with his on-again/off-again tabloid reporter girlfriend Bree (Kerry Knuppe) to search for his missing brother Cody (David Thomas Jenkins). Cody is a doctor who had set up shop in an abandoned hospital, where he was exploring the medical effects of voodoo before he went missing. How does Danny Trejo play into all of this? Well, he really doesn’t. Trejo “stars” as Kross, the dubious hospital administrator/exposition machine we see working alongside Dr. Cody in video files discovered by Aiden and Co.

Voodoo Possession opens by depicting a childhood trauma involving the boys’ mother (Nancy La Scala) that might’ve been more harrowing if the acting weren’t so bad. I realize that looking for Oscar-caliber acting in a movie called Voodoo Possession is a fool’s errand; heck, I’m fairly sure the actors themselves realized they weren’t going to be preparing any acceptance speeches.

The problem is the laughably melodramatic acting and staging inevitably sabotage whatever emotional heft writer/director Walter Boholst is attempting to achieve. For example, the story addresses the crippling and dangerous effects of holding on to guilt; unfortunately, that idea is personified by a black, gooey, unintentionally hilarious Guilt Monster in the film’s climax.

I don’t want to bang too much on the creature effects — courtesy of Oscar-winning makeup artist Barney Burman (J.J. Abrams’ Star Trek) — because they’re actually one of the film’s minor strengths. I was especially impressed with the creation of “Happy Man” (Tomas Boykin), a possessed mental patient who terrorizes our heroes across multiple spiritual planes of existence. The production — Voodoo Possession had a rapid 12-day shoot — also boasts an impressive abandoned hospital set (although you really can’t go wrong with any abandoned hospital set in terms of chills). Less impressive is the idea that the spiritual world/flashbacks are conveyed by hanging a bunch of painter’s plastic from the ceiling and making the camera lens murkier.

As I mentioned before, the acting is terrible across the board, especially when it comes to the three lead roles. Supporting players like Abe Spigner (as fraidy-cat crew member Duane) and Treva Etienne (as voodoo priest Jean Drouillard) at least provide some mild chuckles and theatrical flair, respectively. Meanwhile, Trejo (remember him?) isn’t nearly as effective when the material isn’t a bit pulpy or makes use of his effortlessly badass persona. (Even Danny Trejo can’t make a “hospital administrator” seem badass.)

It’s a shame because I thought Voodoo Possession was on to something. Movies like Child’s Play and The Skeleton Key, along with the current iteration of American Horror Story: Coven, have used voodoo as a plot point. But I don’t really think we’ve gotten the definitive horror flick about this particular branch of black magic. (Certainly not in the way, for example, The Exorcist is the definitive demonic possession film.) Voodoo Possession isn’t that movie, but at least it tried to be.