Posted in: The Reel World by Brent Lorentson on January 8th, 2014 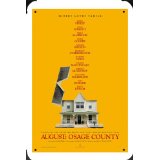 With the holidays behind us and a new year already in full swing, most of us are recovering from all the holiday spirit and quality family time that this time of year seems to demand of all of us.  At some point I’m sure most families have suffered through heated exchanges and emotional turmoil that only our kin can pry out of us.  August: Osage County is about that family turmoil, and skeletons in the closet but ramped up to the point where some viewers may need some counselling of their own by the time the credits roll.

With the exception of a few moments throughout, the film is isolated within the confines of the Weston home in Oklahoma. The setup is simple; a family comes together after the disappearance of their father, and as the family comes together dreading the impending fate of their father, resentment and secrets come spiraling out as the family disintegrates before our very eyes, and we see the harm that words and the truth can inflict.

Meryl Streep plays Violet Weston, a venomous woman suffering through mouth cancer and a nasty pill addiction that causes her moods to swing from bitter (at good times) to foul and caustic (most of the time).  For me this is Streep’s most memorable role in the past decade and a performance that is clamoring for awards attention.  But what is most shocking is that just about every performance in this film is just about on par with Streep; this may be one of the best ensemble pieces put to film in quite some time.

Barbara (Julia Roberts) is the anchor of the family, the one everyone expects to have the answers, but she’s beyond dealing with her mother’s cruelty and is having to mend her broken marriage to her timid husband, Bill (Ewan McGregor).  As much as the performances are dialog-based, it’s what isn’t said between Barbara and Bill that intrigues me, as we are only given sprinkles of their troubled home life throughout, and it’s hard to pin down who may be the one at fault for their domestic feud.  But as with all relationships, nothing is ever so simple or black and white.

There is the Aiken family, played by Chris Cooper and Margo Matindale, who have been there through it all for Violet and her family.  There is this beautiful yet intense moment where Violet discusses what makes Mattie a strong woman.  Sure, there are many great dialog moments throughout, but this was one of the exchanges that left a mark that reveals how ugly the world can be.

Everyone has a moment to shine in this film, and every character plays an integral part in this film.  The sequence many will take away from this is the family dinner.  I’m not about to spoil anything, but this is a moment in the film that is filled with so many laughs but simultaneously plays out as this ticking time bomb set to go off at any moment.  It’s harsh, it’s cruel, but damn, this is some of the greatest dialog exchanges put to the screen.

Director John Wells, though this may be his second theatrical film, he’s been in the business for a while most notably working on The West Wing and ER, both of which were driven by their ensemble casts.  He keeps it simple and focuses his attention on the performances and lets his talent do the heavy lifting.  Some may gloss over this film’s direction because of its simplicity, but isn’t that the first sign of great direction, where it just seems as though these performances just magically came together?

To sum it up, this may not have the spectacle of American Hustle, Gravity, or The Wolf of Wall Street, but August: Osage County is the film that doesn’t hold back its punches.  It’s a film that will leave you emotionally drained, or for those that may relate too much, a phone call away from being Baker-acted.

Brent Lorentson is a horror writer and film critic based out of Tampa, Florida. With a BA in Digital Film, he co-wrote and co-directed Scavenger Hunt. His short stories have appeared in various horror anthologies. In 2019 his short script Fertile Blood will be a part of the anthology horror film Slumber Party. He is currently working on his first novel A Dark and Secret Place set to be released in late 2019. Favorite Films: Taxi Driver, Fight Club, I Saw the Devil, The Wild Bunch, Dawn of the Dead, A Clockwork Orange, Pulp Fiction, Heathers, The Monster Squad, and High Fidelity.
Duck Dynasty Season 4 (Blu-ray) Murph: The Protector (Blu-ray)