Posted in: Disc Reviews by Brent Lorentson on January 7th, 2014 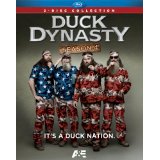 OK, stepping off my soapbox and on to the review.  Season 4 starts off with Phil and Kay renewing their vows after 48 years of marriage.  Normally I don’t really go for these sap-trap (cheesy romantic stuff) episodes, but what saved it was Uncle Si’s trip down memory lane that he takes Phil and Kay on.  Uncle Si, no matter how much of a ham for the camera he is, I can’t help but enjoy the moments he graces the show with his screwball antics.  This episode works as a prime example for my one gripe I have: for a show that is supposed to be reality-based, every aspect felt scripted.  It’s  not that I have a problem with the shows being mapped out, but it’s starting to feel more as though the Robertsons have become caricatures of themselves, and it just doesn’t feel as genuine any more.

There is still fun to be had throughout the season as the show is focusing more attention on the other employees of Duck Commander.  Goodwin gets some time circled around him once he calls in a favor to have a hot tub set up at his home, while another episode revolves around Martin going on a big date, and just about everyone has advice to throw his way.  Spreading the wealth like this kept things fresh and helped prevent the show from retreading story ideas.

The standout episode of the bunch goes to the episode John Luke After Dentist.  The incident that the title involves is only a footnote to the humorous moments that are sprinkled throughout the episode.  When the freezer at Duck Commander goes out, the meat that all the guys have stored inside goes bad and needs to be tossed which sets Jeb, Jase and Phil off on a quest to find a location to dump the spoiled meat. We’re not talking Breaking Bad levels of storytelling, but what we do get are a few solid laughs, and that’s what we are tuning in for.

For the romantics (and naysayers) out there who are looking to try something new for their loved ones, maybe you’ll want to take a page out of Phil’s book and take your loved one out turtle hunting.  In a weird way this seemed to stick out the most as the most genuine moment of the show where we get to see Phil’s true character as he tries to find the perfect turtle to replace Kay’s missing Mister T.  There is a lot to be said about a guy wading around in the swamp picking turtle after turtle till he finds the right one to make his wife happy.

Duck Dynasty Season 4 is presented in its original aspect ratio of 1.78:1.  The 1080p image is arrived at with an AVC MPEG-4 codec with an average of about 27 mbps.  For a reality show the picture here looks really good.  Granted many of the shots are preset, and I’m certain there is a fair amount of lighting at play to bring out some beautiful shots (the season opener comes to mind).  But throughout the show we are given numerous beautiful exteriors while the guys are out and about.  During the season opener I did notice some artifacts, mostly with Willie’s plaid shirt.  For the most part, though, the images do look sharp and not overly saturated; when you can see the detail of Si’s beard and want to pluck his wild strands, well, you know you have a crisp image.

The DTS-HD Master 2.0 Audio track is a bit under-whelming, but considering this is a reality show, expecting the bells and whistles and a robust sound design is asking a bit much.  What we do get is clear audio throughout, and for the characters, like Uncle Si, thankfully they come with subtitles so we can understand them (at least most of the time).  What does come through, surprisingly enough, is the ambient noise of the swamp, which does add extra warmth to the scenes.

6 deleted scenes: (10:10) For me the best scene cut here is the scene in Martin’s bedroom as the Robertson wives try to give him advice on what to wear.   It’s a brief scene, but it’s charming in its own way and might manage a chuckle out of you as well.  All these scenes are actually worth giving a watch, and I wouldn’t want to spoil the fun of them.

Season 4 isn’t quite on par with the previous seasons, but it continues to make me smile.  It’s nice to actually have a show I can watch with my family and not worry about the language or if they’ll do something inappropriate.  Despite the controversy behind the scenes, the show continues to be a guilty pleasure I have to admit I enjoy getting to review each and every time.

Brent Lorentson is a horror writer and film critic based out of Tampa, Florida. With a BA in Digital Film, he co-wrote and co-directed Scavenger Hunt. His short stories have appeared in various horror anthologies. In 2019 his short script Fertile Blood will be a part of the anthology horror film Slumber Party. He is currently working on his first novel A Dark and Secret Place set to be released in late 2019. Favorite Films: Taxi Driver, Fight Club, I Saw the Devil, The Wild Bunch, Dawn of the Dead, A Clockwork Orange, Pulp Fiction, Heathers, The Monster Squad, and High Fidelity.
Voodoo Possession August: Osage County