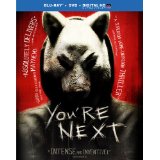 Meeting your significant other’s family for the first time can be a terrifying experience. Then again, being introduced to your son/daughter/brother/sister’s new boyfriend or girlfriend can be equally dicey for the family, since we’re talking about a total stranger being thrown into the mix. The best thing about You’re Next is how it takes this sort of recognizable family drama and gleefully twists it into a brutally violent — and brutally funny — horror film.

The unfortunate family at the center of this genre mash-up is the Davisons, who have convened for the first time in a long time to celebrate Aubrey (Barbara Crampton) and Paul’s (Rob Moran) 35-year anniversary. Their four grown children — Crispian (AJ Bowen), Drake (Joe Swanberg), Aimee (Amy Seimetz) and Felix (Nicholas Tucci) — along with their respective significant others — Erin (Sharni Vinson), Kelly (Margaret Laney), Tariq (Ti West) and Zee (Wendy Glenn) — all gather at the family’s remote, picturesque home in the middle of the woods.

What could possibly go wrong beyond some sibling sniping at the dinner table? Well the Davisons suddenly find themselves under attack by a gang of masked murderers who seem intent on slaughtering everyone inside the house. What the killers didn’t count on was the fact that one of the family’s houseguests possesses a surprising knack for fighting back and might be the most dangerous person of them all.

At first glance, You’re Next is superficially similar to The Purge, another home invasion horror flick featuring eerily masked intruders that lit up the box office earlier this summer despite not being a very good movie. The big difference is The Purge took an excellent concept and made it totally mundane by mechanically and joylessly hitting every horror movie beat in the book. On the other hand, You’re Next infuses painfully familiar dysfunction with buckets of fresh (fake) blood. This film may not feature the same overt genre commentary of Cabin in the Woods or the Scream franchise, but it’s obvious the people who made You’re Next really love horror movies.

Director Adam Wingard was responsible for my favorite segment in the wildly uneven ABCs of Death horror anthology. Wingard, working from a script by Simon Barrett, brings the pitch black humor from that short to You’re Next. He’s also brought a pack of like-minded filmmakers. The cast features six performers — Swanberg, Seimetz, West, Barrett, Larry Fessenden and Calvin Reeder — who have directed films, mostly in the world of “mumblecore.” Mumblecore is a subgenre of American indie filmmaking defined by micro budgets and naturalistic dialogue/performances. (The horror-focused cousin of mumblecore is known as “mumblegore.”)

These qualities — including the occasionally amateurish acting — are all on display in You’re Next, which actually premiered at the Toronto International Film Festival in 2011. Among the cast, the standouts include Swanberg’s entertaining jerkiness as he spars with solid straight-man Bowen, Vinson’s layered work as Erin, and Tucci’s funny cowardice as Felix. I do wish Re-Animator star Crampton (who still looks amazing, by the way) had been given more to do as the fragile matriarch.

More importantly, the mumblecore sensibility is incorporated in a variety of amusing ways. It’s there in the dinner table argument between two brothers (featuring a bunch of overlapping dialogue) that they continue a few minutes later, despite the fact that one of them now has an arrow sticking out of his back. You’re Next features graphic violence, but often presents it with a wicked slice of humor. (One character basically becomes a human pin cushion, while the filmmakers repeatedly tease us with a front door deathtrap straight out of a demented, R-rated version of Home Alone). I also really enjoyed the way Wingard began framing the masked killers as the typical horror movie victims after the movie’s hero turned the tables and began stalking them.

Not all of the genre-blending is entirely successful. The film’s cold open — featuring a couple engaged in sexytime who clearly don’t know the rules of horror movies — feels somewhat disconnected from the rest of the film. It also felt like Wingard was trying a bit too hard to create a *moment* with his ironic use of the Dwight Tilley Band’s breezy pop song, “Looking for the Magic.” You’re Next also heavily relies on the same sort of shameless jump scares the film seems to be lovingly mocking without really offering anything new. On the plus side, the movie does take some surprising and satisfying turns on the way to its bloody conclusion. The film’s opening act may be a bit of a snoozer, but I suspect it’ll play better on subsequent viewings once you know what’s in store for the characters.

You’re Next isn’t quite the groundbreaking scary movie some people are making it out to be. However, it’s a very entertaining take on modern horror told with a refreshing enthusiasm for the genre. I’ll be keeping an eye out for Wingard’s work in the future, and I suspect this film will be his first brush with mainstream success: “how were we supposed to know you were really good at killing people?”