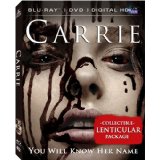 The idea of remaking/reimagining/refurbishing a horror classic may have been laughable at one point, but now it’s just business as usual. Then again, I happen to think this is an especially good time to revisit 1976’s Carrie. With all the attention bullying has gotten in the media these last few years, the supernatural story of a high school outsider pushed to her violent breaking point seems particularly timely. I just wish the new movie had more going for it beyond decent timing and a pair of impressive leading ladies.

The story, based on Stephen King’s first novel, remains essentially unchanged. Carrie White (Chloe Grace Moretz) is a shy high schooler who doesn’t fit in with the cool kids at her school, including prom queen frontrunner Sue Snell (Gabriella Wilde) and resident mean girl Chris Hargensen (Portia Doubleday). Carrie also has a demented religious fanatic for a mother (Julianne Moore) who occasionally locks her daughter in the “prayer closet” under the stairs. So when the young girl gets her first period after gym class, Carrie believes she’s bleeding to death.

Carrie’s classmates humiliate her, and the fallout from the girls’ cruel taunts end up messing with Sue and Chris’s prom plans. Meanwhile, Carrie learns that she has telekinetic powers, which manifest when she’s under duress. She also winds up being asked to the senior prom by Tommy Ross (Ansel Elgort), Sue’s popular jock of a boyfriend. I feel silly issuing a “spoiler alert” for a story that’s almost 40 years old…but let’s just say the spiked punch winds up being the least of everyone’s worries at the prom.

I’m not really interested in doing a compare/contrast piece between this film and Brian De Palma’s outrageous original. I’ll just say the biggest reason De Palma’s film has endured as a disturbing horror tale for so long is because he successfully constructed Carrie’s life as a nightmare. (Or a fever dream, actually.) His characteristic over-the-top-style put you in the disturbed headspace of Carrie and her mom. The new Carrie is effective, but more workmanlike in its approach to telling this familiar story.

Director Kimberly Peirce, working from a script by Lawrence D. Cohen and Roberto Aguirre-Sacasa, doesn’t mess with the story too much. (Maybe a certain someone who died during Carrie’s original pig blood-fueled prom rampage survives in this version.) There are obvious updates to the story — like Carrie’s shower room humiliation being filmed on a smartphone and posted online — but Peirce’s contributions as a director are far more subtle than De Palma’s flashy split screens and luxuriously long takes. For example, I liked the decision of casting the statuesque Wilde as the kinder Sue, because actresses who look like her usually end up playing the mean girl. The iconic prom scene benefits from improved special effects, but is hurt by the fact that these violent pop culture images aren’t nearly as shocking as they were in the 1970s.

I happen to think Moretz is one of the most promising young actresses working today, and it was refreshing to see (gasp!) an actual teenager playing a high school student. (Another bonus: the actress’s youth further set Moretz apart from her more womanly co-stars Doubleday and Wilde.) Moretz — who previously starred in Let Me In, the underappreciated horror remake of the terrific Let the Right One In — looks like a movie star. Unfortunately, that’s a bit of a problem since 2013 Carrie White is supposed to be pretty plain. The actress doesn’t have the otherwordly, lovely gawkiness Spacek had in the original, but Moretz still manages to be convincing as an intensely introverted girl. (And, not surprisingly, the breakout star from the Kick-Ass movies looks like a natural when Carrie goes on her rampage.)

Carrie is presented in its original aspect ratio of 2.35:1. The 1080p image is arrived at with an AVC MPEG-4 codec at an average 30 mbps. The high-definition image presentation is certainly sharp and loaded with wonderful texture and detail. There is an interesting use of color correction that gives the film a bit of a dreamlike quality at times. It’s a soft haze, often accompanied by a warm hue. Black levels are pretty solid, and that’s a good thing. Most of this film occupies the night. Daylight exteriors almost appear harsh in contrast. The film excels in close-up shots of the actors. You really get a feel for the nuanced performance Moretz delivers.

The DTS-HD Master Audio 5.1 is not as aggressive as I expected it to be. With all of this shattering glass and flying objects I hoped to feel these objects whisk about me. Instead, surrounds are a bit reserved. Dialog dominates the sound field. As for the sound quality, it’s as crystal clear as those aforementioned glass shards. The score delivers some emotional moments. The subs never really get driven, but there is a fullness to some of the more explosive scenes that makes up, in part, for the minimalist mix.

There is an Audio Commentary with director Kimberly Peirce. It’s quite dry. She sounds like she’s reading from a script, and perhaps she is. While it can be quite informative, I felt like I was listening to a college lecture.

Alternate Ending: You can view the film with an alternate ending that tacks on an additional scene with Sue.

Deleted/Alternate Scenes: (10:18) There are nine scenes with optional commentary by Peirce. You also have the handy play-all feature. Nothing stands out here and likely better off cut.

Tina On Fire – Stunt Double Dailies: (2:18) This is a short behind the scenes piece with another optional commentary from Peirce. She explains why they went the particular direction they did with that specific stunt/scene.

Creating Carrie: (21:07) This is your typical behind-the-scenes material. Unfortunately, it’s driven by Peirce, who once again appears as if she’s lecturing a college class. It’s not enough to dampen the remainder of this feature that delivers some nice production footage and casting insight. Cast and crew all give a few of their ideas in a much more passionate and entertaining style of delivery.

The Power Of Telekinesis: (4:01) Cast and crew answer the question: Do you believe telekinesis is possible?

Telekinetic Coffee Shop Surprise: (2:39) This is a Candid Camera/Punk’d kind of feature where they rigged up a coffee shop so that it looked like a girl was using Carrie-like powers. Some of the reactions are pretty entertaining.

This last October brought a distressing lack of horror offerings in what’s supposed to be the spookiest time of the year. Insidious: Chapter 2 opened earlier, and the newest Paranormal Activity got pushed off its customary October perch. (Heck, even Carrie was originally supposed to open this past March.) The scariest thing I’ve seen this year might be the box office performance of The Fifth Estate. Although Moretz and Moore elevate the material — and you literally have no other choice if you want to see a new(ish) scary movie on the big screen before Halloween — this new Carrie is a solid, ultimately inessential horror entry.

Parts of this review were provided by Gino Sassani