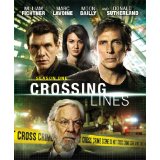 Location, location, location! The notion that a desirable geographic spot can make a huge difference isn’t exclusive to the world of real estate. Take, for instance, Crossing Lines. At first glance, the show fits comfortably alongside any number of American police procedurals that feature curiously attractive cops and a fresh set of dead bodies each week. It’s a formula that’s worked for decades, so it’s hard to argue for a complete overhaul. The best fans can hope for are clever tweaks to help new shows stand out from the crowded cop show lineup. Crossing Lines accomplishes this by taking all the fake corpses you’ve seen on New York and L.A. streets and scattering them across Europe.

“Like all good stories, this one starts with a beautiful woman. Young, adventurous, full of life…unfortunately, this story also starts with the end of that life.”

Daniel also recruits N.Y.P.D Det. Carl Hickman (William Fichtner) for the team. Hickman once led his department in arrests, but is living as a garbage collector in Amsterdam when we first meet him. He still appears to have a brilliantly intuitive mind; unfortunately, he also has a crippled hand, as well as the morphine addiction that came along with it. The special crimes unit occasionally gets a procedural boost from ICC legend Michel Dorn (Donald Sutherland), who unofficially oversees Daniel’s team and is more used to dealing with war crimes and genocide. Crossing Lines hits the ground running with a fast-paced, two-part pilot that features the death of a team member.

The 10-episode first season more closely follows the British/European model of TV production rather than the 22-episode seasons we’re accustomed to seeing on American network TV that amount to a race to 100 episodes (and a lucrative syndication deal). It’s not surprising, since the English-language drama is actually a French-German co-production. (Season one was filmed in Paris, Nice and Prague. NBC aired this batch of episodes in June.)

The result is a tight collection of episodes that feel more urgent than your typical procedural. In fact, I hesitate to even use the word “procedural” since that suggests a Law & Order/CSI-style drama with a completely different case every week. Not only does Crossing Lines pack in three two-part episodes in its first season, but a significant amount of time is dedicated to a pair of shadowy Big Bads: there’s the creep who shot Hickman in the hand (played with characteristic relish by Sons of Anarchy’s Kim Coates), as well as the Russian colonel responsible for the death of Daniel’s son.

Creator Edward Allen Bernero (Criminal Minds, Third Watch) isn’t trying to re-invent the wheel here. Crossing Lines is neither outrageous in its concept (this isn’t cops teaming up with a robot or Ichabod Crane) nor in its willingness to push boundaries (ala NYPD Blue or The Shield). However, he does know how to make lurid subject matter impulsively watchable. Ep. 4/“Long-Haul Predators” introduces us to a twisted fight club. The two-part/cliffhanger-happy season finale (“New Scars, Old Wounds”) puts most of the team members in mortal danger while simultaneously introducing a pair of characters who could easily become members of the special crime unit. (It’s a smart way of potentially axing characters who aren’t clicking and replacing them with newbies; in a related story, it looks like Lara Rossi’s Dutch inspector will be a part of the show in season 2.)

I don’t think it’s a spoiler to say Fichtner will be back for more. With his handicap, drug addiction, and volatile mixture of brilliance and crankiness, the Hickman character initially comes off as a poor man’s version of Dr. Gregory House. Thankfully, Fichtner — the reliable, talented character actor (probably best known for his three-year stint on Prison Break) is able to bring his own twist to the role and winds up being an effective anchor for the show. He’s supported by a capable ensemble, with charismatic performers like Flood, Wlaschiha, O’Reilly and Pession. And considering this is a predominantly French production, I was surprised to see Dailly and Daniel — the two French series regulars — are the show’s wet blankets. (Daniel’s marital woes are well-played, but quickly become tiresome and slow the show’s momentum.) Then there’s Sutherland who, frankly, doesn’t have a heck of a lot to do. I honestly kept expecting some sort of twist or reveal where he turned out to be a Big Bad…anything to make the role of Dorn worthy of Sutherland’s talent.

Crossing Lines: Season One is presented in its original aspect ratio of 1.78:1. The 1080p image is arrived at with an AVC MPEG-4 codec at an average of 32 mbps. The production values for the series are reasonably high, but the visual presentation winds up being somewhat underwhelming. There’s nothing *wrong*, per se: the image is clear and free of banding, aliasing or any noise. On the other hand, I’ve certainly seen sharper home video presentations of TV shows. The slightly downcast palette matches the show’s tone, but it’s a bit of a hindrance when the action moves to picturesque French or Czech locations. This is a decent, unspectacular offering that doesn’t take full advantage of Blu-ray’s capabilities. (At least Lionsgate was kind enough to even release this on Blu-ray.)

The DTS-HD Master Audio 5.1 track, however, is a pleasant surprise. I’m not surprised at how aggressive it is — Crossing Lines won’t be lauded for its subtlety — with the thumping “thriller score” by Guillaume Roussel working the subs. The unexpected delight of this track is that it’s alternately dynamic and understated depending on the situation. During outdoor scenes, for example, the rears pump out quiet ambient noise. Those same rears come to life when Hickman chases his nemesis through a funhouse. The English dialogue also comes through very clearly, which is especially impressive considering the German, Italian, Irish and French accents at play.

Behind the Lines Featurette: (10:09) Show creator/producer Bernero talks about his background as a policeman and his desire to do a contemporary European show that harkened to the period in U.S. history when the FBI was formed. (He also seemed uncommonly grateful for the concept of filming and completing all of a season’s episodes before they aired.)

In terms of groundbreaking drama, this show doesn’t cross very many lines. There’s no doubt the show will mostly stand out for American audiences because of its European setting. Personally, I got a kick out of moments like seeing the team take a train to a crime scene in a different country. And, to be honest, I wasn’t overly familiar with the International Criminal Court until this show. (Although it turns out the idea of an ICC special crime unit is entirely fictional. Or is it?)

However, Crossing Lines also offers easy, competent thrills to go along with the exotic locales. Give this a look if you like the cold comfort of violent procedurals, but you want to see one that takes place somewhere other than L.A. or New York. (Or in a different U.S. city that’s actually L.A. or New York in disguise.)