Posted in: No Huddle by Brent Lorentson on January 24th, 2014 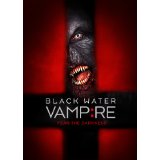 In 1999 I remember standing in line at the Tampa Theatre waiting to see The Blair Witch Project; the line wrapped around the corner.  All of us were anxious to see this film that was cloaked in so much mystery with an internet marketing campaign that manipulated so many to believe that the film we were all about to watch was in fact all true and was all found footage being released onto the big screen.  The Blair Witch Project wasn’t just a success, it was a smash hit, and it changed the way we view cinema, where we all saw that all you needed was a camcorder and a clever hook, and any regular Joe could create a hit film.  Now the found-footage genre is in fact its own genre at this point, and many young up and coming filmmakers are plundering the genre for all it is worth.

It’s been 15 years since The Blair Witch Project was released, and keeping the genre alive, we get Black Water Vampire released onto DVD.  The film is set up nicely as an officer talks about a crime scene he is at and goes into great detail concerning the victim, found dead and naked in the snow, drained of all her blood.  She has a wound that leads the officer to believe she was bitten by some animal, but is it the cause of death?

Danielle (Danielle Lozeau) leads the film crew into their investigation to uncover the mysteries that surround all the suspicious Black Water murders.  Her obsession with the case is heavily reminiscent of that of the investigators of The Blair Witch Project.  Joining her on the investigation is her good friend Andrea (Andrea Monier), her camera operator Anthony (Anthony Fanelli), and her sound tech, Rob (Robin Steffen).  Though the crew seems to of worked together in some capacity, there isn’t the close-knit bond of a crew that has worked in the trenches together through numerous film projects, but thankfully there was still a shred of chemistry between the crew to get us to care.

The snowy surroundings offer an extra layer of tension to the film as we see the crew venture deeper into the woods to find the crime scene from the opening sequence.  As they move into the woods the crew encounters a variety of odd occurrences.  The nighttime brings along the more frightening moments between their tent being vandalized and strange screams coming from the darkness.

Things continue to escalate when the crew seems to get lost and eventually separated.  For those that have seen Blair Witch Project, this will seem more than a little familiar.  As the film continues to follow Blair Witch nearly beat for beat, what keeps it somewhat fresh is what follows in the third act.  Fear not, I’m keeping this spoiler-free, but the third act is what makes this little film worth the watch.  I’m not about to say this has the most clever ending, but the filmmakers do a good job of giving us a payoff that makes the first 70 minutes worth sitting through.

Sure, the film suffers from the same complaints many others have with the found-footage genre, but there is some charm to this film.  It’s not a film I see myself remembering months down the road, but it was a fun watch, and that’s all you need.  Considering we’re in the heart of winter, this is a film that would be fun to curl up under the blanket, have some hot cocoa (just be careful not to spill if you’re easily frightened), and enjoy.

Brent Lorentson is a horror writer and film critic based out of Tampa, Florida. With a BA in Digital Film, he co-wrote and co-directed Scavenger Hunt. His short stories have appeared in various horror anthologies. In 2019 his short script Fertile Blood will be a part of the anthology horror film Slumber Party. He is currently working on his first novel A Dark and Secret Place set to be released in late 2019. Favorite Films: Taxi Driver, Fight Club, I Saw the Devil, The Wild Bunch, Dawn of the Dead, A Clockwork Orange, Pulp Fiction, Heathers, The Monster Squad, and High Fidelity.
Crossing Lines: Season One (Blu-ray) The Invisible Woman