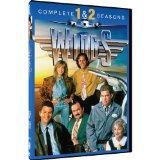 Wings was one of those unusual sitcoms that depended more on the characters than the situations they were in. While the setting was a small Nantucket airline owned by two brothers, most of the episodes had very little to do with flying. Rather, the writers populated this small airline with very distinctive personalities and let these interactions be fodder for the funny. The characters were played by more than competent actors, many of whom have proven themselves beyond this quaint sitcom. Timothy Daly played Joe Hackett, the older, more responsible brother who was often the show’s straight man. His rather adolescent sibling Brian was played by Steven Weber. I wouldn’t exactly say this was Oscar Madison and Felix Unger, but their conflicts over maturity fueled the characters. The airline’s love interest was Helen Chappel, played by Crystal Bernard. She was an aspiring symphony cellist who worked the airport’s lunch counter. For much of the show’s run she had an on-again-off-again romance with Joe. By far the most animated character was mechanic Lowell Mather, played by Thomas Haden Church. It’s still amazing to me that this rather unintelligent character was played by the same guy who brought us Sandman in the latest Spider-Man film. Finally there was cabbie Antonio Scarpacci, played by the current Adrian Monk, Tony Shalhoub. Antonio is an Italian immigrant who has trouble understanding things most of the time, leading to some of the better moments in the series. Fay, played by Rebecca Shull, is the mothering member of the cast. And Roy Biggins (Schram) runs the rival airline and is often engaged in one underhanded scheme or another.

Tony Shalhoub would eventually find a resurgence in his career as the off-kilter detective Monk, and Tim Daly would go on in such shows as The Fugitive new series and finally Private Practice. Alas, most of the other characters and actors would not be heard of much over the next decade or so. Steven Weber would pop up from time to time as well. It’s always a bit of fun to revisit actors and characters after a few years have gone by.

The first season has only seven episodes. The show was a late-season replacement and didn’t air its first show until April of that season. It served enough to introduce the characters, and it proved a bit of a ratings surprise. The second season started in September and ran almost a full season, ending in March but with a respectable 22 episodes.

They’re all here on three discs in this Mill Creek reissue of the first two seasons. Again, I have to complain about them being stacked on a single spindle. Come on, guys, cut that out. It’s a nice affordable set, and I guess we can’t have everything. If only… “If  ‘ifs’ and ‘buts’ were candy and nuts, we’d all have a wonderful Christmas.”

Gino Sassani is a member of the Southeastern Film Critic's Association (SEFCA). He is a film and television critic based in Tampa, Florida. He's also the Senior Editor here at Upcomingdiscs. Gino started reviewing films in the early 1990's as a segment of his local television show Focus. He's an award-winning recording artist for Omega Records. Gino is currently working on his 8th album Merchants & Mercenaries. Gino took over Upcomingdiscs Dec 1, 2008. He works out of a home theater he calls The Reel World. Favorite films: The Godfather, The Godfather Part II, The Body Snatcher (Val Lewton film with Karloff and Lugosi, not the pod people film), Unforgiven, Gladiator, The Lion King, Jaws, Son Of Frankenstein, The Good, The Bad And The Ugly, and Monsters, Inc.
Stonados The Fifth Estate (Blu-ray)