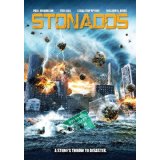 They say if you’re going to steal, you should steal from the best. Well, that’s the exact opposite of what SyFy has done with the hilariously shameless act of self-cannibalization known as Stonados. Say what you will about Sharknado — and snarky commenters excitedly blew up Twitter shortly after its premiere — but at least that particular slice of premium B-movie cheese was inspired in its lunacy and stupidity. Stonados, on the other hand, is pretty obviously a way for the network to capitalize on the unexpected heat generated this past summer by the perfect shlock storm of Sharknado.

Sharknado aired in July, and even SyFy couldn’t crank out a “worthy” sequel — I cannot overstate how strong those quotation marks around the word “worthy” are — by the end of the year. (Finding just the right mix of washed up ’80s/’90s talent is an artform you simply can’t rush.) So the network found a quicker, less-satisfying way to capitalize on the original film’s buzz. The result is Stonados, which premiered in November, I assume, so that it would be eligible for all the prestigious year-end awards.

Remember how Steven Spielberg masterfully created a sense of dread and terror in Jaws by holding off on showing us the (uncooperative) shark as long as possible? Well, Stonados gleefully goes the other way and rarely passes up a chance to show off its crap-tastic visual effects. Director Jason Bourque (Seattle Superstorm) barely waits a minute to unleash his film’s terrible CGI during an opening scene set at the site of Plymouth Rock.  A storm appears out of nowhere and sweeps up an unfortunate tour guide along with Plymouth Rock, which lands on top of a cocky basketball player 40 miles away and inadvertently proves Malcolm X right.

Science teacher Joe (Paul Johansson) is called in by his police officer sister Maddy (Miranda Frigon) to examine the freak accident. They’re joined by Lee (Sebastian Spence), a small-time weatherman who has a long-term crush on Maddy and is Joe’s Harvard college buddy. Soon, another stonado — Lee actually trademarks the phrase — hits the marina and kills a bunch of lucky unlucky extras who don’t have get to be in the movie anymore. Joe and Lee try to warn the skeptics at the Federal Oceanic Agency about the increasing likelihood of a massive stonado that could destroy Boston. After the storm finally arrives, Joe has to race against time to save Boston and his annoying/trouble-magnet kids before all hell hail breaks loose!

Some of the details in the previous two paragraphs strongly hint at the idea that Bourque, writer Rafael Jordan, and everyone involved in this production has a healthy sense of humor about this mess a movie. (Need more proof? The film’s climax involves launching a non-nuclear warhead into the stonado. Also, Joe decides it’s a good idea to bring his kids along for this highly-dangerous mission.) Unfortunately, that sense of play doesn’t trickle down to the performances. Spence is the only actor who’s allowed to have some fun or acknowledge the ridiculousness of the proceedings. The biggest “star” (again…strong quotation marks here) is former X-Files actor William B. Davis, who pops up for a few scenes as an ill-fated lighthouse dweller.

Then again, wooden acting is the least of this film’s worries. I was much more disappointed by the movie’s distressing lack of imagination. Let’s start with the title: if you’re going to rip off Sharknado, why not go for more marine/weather-based mayhem (Octopusunami!?) or come up with something more outrageous to throw at these characters than rocks? (How about Stoveados!? Gas stoves, electric stoves, furnaces flying everywhere!) The action scenes we do get are both derivative and redundant. For example, there are multiple instances where a random character gets Deep Blue Sea-ed. (“Deep Blue Sea-ed”, of course, is a verb describing a character who gets killed mid-sentence by horrible special effects.) I guess what I’m saying is, where’s the equivalent of a chainsaw-wielding Ian Ziering diving headfirst into a shark’s mouth?!

I haven’t even mentioned the potentially awkward idea of staging scenes of mass mayhem and destruction in Beantown less than a year after the Boston Marathon bombings. The good news is it’s impossible to get offended, mostly because this movie is a joke and partly because — like many other cheap-o SyFy originals — it was clearly filmed in Canada. (The Boston Bruins gear they made random extras wear isn’t fooling anybody; also, it would’ve been hilarious nice if the cast had at least attempted Boston accents.) Sharknado: The Second One is due this July (yes, that’s the title). Stonados tried — and failed — to scratch our collective schlocky itch. “Let’s hope that was the worst of it.”