Posted in: Disc Reviews by Archive Authors on January 29th, 2014 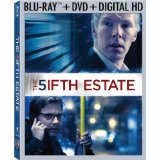 Journalism today is in disarray. I say that not because there aren’t many, many passionate journalists who want to do the best job possible. I say it because there are just many, many, many more bloggers who don’t know how live up to those standards or why it’s even important. The internet changes everything in the music industry, the movie industry, and the media industry. That doesn’t necessarily mean it’s a bad thing. It just means that it’s chaotic, and it often seems like no one is in control. The head of Amazon just bought one of the most venerable papers in the world, The Washington Post. The head of eBay is supposedly organizing a new media venture that will adhere to the strictest journalistic standards. Again, journalism today is in disarray.

The Fifth Estate is a movie about the frenzy surrounding Wikileaks and Julian Assange. The title suggests there is a successor to the fourth estate, which is the news media (don’t ask about the first three estates since they are church, state and nobility, which may be irrelevant now). I don’t know if anybody knows what a fifth estate is yet, but Wikileaks is a big deal. It is also justifiably considered to be extremely controversial. Wikileaks is an international online organization that claims to protect the identity of any whistleblower trying to reveal classified and secret information with the hope of undermining worldwide corruption. I’ve seen the documentary We Steal Secrets: The Story of Wikileaks and was able to compare that to The Fifth Estate. They are quite different, but in small ways that can add up to a lot.

The biggest difference is that the real Julian Assange is not so easy to read and is a cool, calm character in the documentary even despite some outlandish revelations (sexual improprieties, you say?) In The Fifth Estate, Benedict Cumberbatch as Assange is more clearly unhinged much of the time. He seems petulant and unpredictable. His closest friend is Daniel Domscheit-Berg, played by Daniel Bruhl. Their relationship is tempestuous partly because Assange seems given to extreme mood swings. The Fifth Estate was based on Domscheit-Berg’s book, Inside Wikileaks: My Time with Julian Assange and the World’s Most Dangerous Website.

The film details the events that lead up to the revelation of an enormous number of NSA documents calling into question what is the greater evil. There are strong arguments on either side. The Fifth Estate tries to show all sides, and that leads to some of the confusion the film creates. So many different sides are shown that it becomes a muddle. At one point, The New York Times, The London Guardian and the German Der Spiegel attempt to coordinate a simultaneous release of information with Wikileaks, but there is an enormous conflict about whether the volumes of content will be properly redacted to protect sources in the field.

The Fifth Estate is presented in its original aspect ratio of 2.40:1. The 1080p image is arrived at with an AVC MPEG-4 codec at an amazing average of 40 mbps. Whatever else one might say about this film, the high definition image presentation is pure excellence. The image is as sharp as you’re likely to see. Detail helps bring out the nuances of these exotic surroundings and impressive locations. Both the real and the fantasy deliver on pure visual perfection. Black levels are wonderfully inky and the shadow definition translates into all of this detail at any light level.

The DTS-HD Master Audio 5.1 is not really aggressive but makes pretty solid use of surrounds to distinguish the real from unreal worlds. Dialog is the center of attraction here, and it comes alive beautifully. Cumberbatch is rather soft-spoken, and it cuts through the sound design pretty well. The score is rather unique but never distracts from the image. I wouldn’t necessarily call it immersive, but it does lend to more of experiencing the film’s quirky moments rather than merely observing.

The Submission Platform: (10:25) Cast and crew talk about and demonstrate the unreal world that was created where the imaginary Wikileaks office is located. You get a good look at how it’s done.

In-Camera Graphics: (6:25) It’s very interesting to see just how much of the f/x were practical pieces. The words that float on their faces and on backgrounds were actually projected on the set and not the expected computer-generated f/x. This is a pretty good look behind the f/x curtain.

Scoring Secrets: (9:10) This one brings us into the recording sessions and inside the mind of composer Carter Burwell. He took some unusual paths to combine for one of the most interesting scores I’ve heard in a while.

I’ve admired the work of director Bill Condon in the past, especially in his handling of real life stories before. I speak of Kinsey and Gods And Monsters, but he also directed the last two Twilight movies. This time the benefit of time to digest events of such consequence has not occurred. These events are literally ripped from the current headlines. As a result, more often than not his approach seems heavy-handed. Awkward visual devices like imaginary newsrooms that depict the amorphous internet seem unnecessary. It is a subject that is difficult to tackle for many reasons, not the least of which is the completely unpredictable and controversial nature of Wikileaks and its founder. I don’t think The Fifth Estate or the documentary We Steal Secrets have yet to uncover all the secrets of Wikileaks.

Parts of this review were provided by Gino Sassani