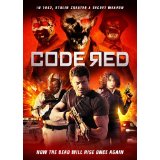 Aw, another tale of biochemical-induced zombies on the verge of causing an apocalypse; it’s good to see that the film industry’s recycle mill is still in working order. This time around the focus is seventy years after the battle of Stalingrad. (Well, at least the focus isn’t on Nazis this time; I guess we can consider that a small victory.) An outbreak of a nerve gas contagion has resulted in the creation of mutated men best characterized as zombies. By now you can probably assess that going into this film, my expectation for the success of the film were not that high, and now that the credits have rolled, I can say nothing has changed.

During World War II, Stalin, much like Hitler, was obsessed with the idea of creating a superior soldier. He believed that the way to achieve this goal was through the process of biochemistry. He authorized experiments to create a nerve gas. This gas had unexpected side effects; the soldiers exposed to the gas became mutated, their minds distorted; they became volatile unstoppable killing machines that went after anything and everyone. During the battle of Stalingrad, the nerve gas went missing and was believed destroyed.

Seventy years later in Bulgaria, a soldier is brought into a military clinic for a supposed chemical accident. NATO doctor Ana Bennett (Manal El-Feitury) tries but is unable to save him; the soldier dies, but that’s when things take a turn. After being pronounced dead, the soldier is resurrected; however, he is mutated and violent, killing a nurse. The report the doctor files attracts the attention of the U.S., immediately recognizing the signs as the symptoms of the nerve gas long thought destroyed, The U.S. sends in Special Forces Captain John McGahey (Paul Logan, Days of Our Lives) to investigate. Corrupt Bulgarian general (Valentin Ganev, The Way Back), at the appearance of U.S. forces grows nervous that his dirty dealings will be discovered and commissions his men to destroy the weapon’s warehouse before McGahey can investigate. Unbeknownst to the general, the warehouse he has ordered destroy is the very place the nerve gas is being stored.

Thus begins the chain reaction. By destroying the warehouse, the nerve gas is released into the atmosphere. Realizing his mistake, the general gives the order for a Code Red: the systemic elimination of everyone, whether they are contaminated or not. With half of the population now under the influence of the gas and the other half eliminating everyone in their path, the group finds themselves heavily outnumbered and must work together to escape the town with their lives.

Every time I come across a movie such as this, the only thing I can think is that all these movies are trying to become the next zombie franchise like Resident Evil or the 28 Days/Weeks franchise. I doubt given the caliber of this film they were shooting that high; however unquestionably the target audience for Code Red was the fans of those popular franchises. Though the film is not a complete disaster and does have a few redeeming qualities, too much time was spent on the buildup to the event and not enough on character development.  The characters are one-dimensional. It is not until towards the end of the film that a few start to show some depth, the most significant being Paul Logan’s character; he for most of the film comes off as a rigid, straightforward character; however, in his scenes with Mya-Lecia Naylor (Cloud Atlas) another side of his character is presented, and he is established as the protagonist. Of the characters, he is possibly the only one that made it watchable, with the exception of Naylor; who could possibly dislike this sweet little girl.

Overall I found the story lacking; too much time was spent on buildup and not enough on explaining the nature of the outbreak or how it affects the infected. Also, the film lacks any real resolution to the story, though it is clear that the intent was that the story was left open for continuation. However, I highly doubt that it will be continued. I was also disappointed that I don’t feel that the clear antagonist of the story was dealt with properly; the story left me with the impression that the good guys suffer and the evil prosper.

Jeremy Butler is a film school graduate of the International Academy of Design and Technology. He is been writing for Upcomingdiscs since 2012; however, movies have played a big part of his life for much longer. Favorite genres include horror, science fiction/fantasy, and comedy. Favorite movies are V for Vendetta, Boondocks Saints, Kiss Kiss Bang Bang, and The Godfather.
Collision (Blu-ray) That Awkward Moment