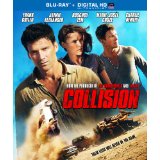 Collision is ostensibly about a honeymooning couple who gets stranded in the desert, and how the harsh, unforgiving terrain shines a light on their many secrets. But the coolest thing about this thriller — besides the spectacularly violent car crash that sets the plot in motion and gives the film its title — is how the story could’ve been told from any of the marooned characters’ perspectives. I just wish writer/director David Marconi hadn’t taken the most winding, contrived road possible to arrive at his destination.

This English-language French thriller counts Luc Besson among its producers. Yet instead of touting Leon: The Professional or even The Fifth Element, the Blu-ray case for Collision boasts that it’s, “From the producer of The Transporter and Taken 2(?!) And that’s how a Blu-ray case can instantly make you feel old.

“This is a desert. There is no one coming to save you.”

The film wastes little time jumping into the story. Scott Dolan (Frank Grillo) is a highly-successful hedge fund manager on a Moroccan honeymoon with his younger wife Taylor (Jaimie Alexander). Collision wastes almost as little time revealing Taylor and her secret lover Travis (Charlie Bewley) plan on murdering Scott during a desert outing. The plan goes awry after a thrilling car chase culminates with Scott and Taylor’s car smashing into a group of strangers stranded in the middle of the desert.

Those strangers include a woman named Audrey (Marie-Josee Croze) with an ailing baby, and a dangerous man in handcuffs named Omar (Moussa Maaskri). The group is eventually joined by Saleh (Roschdy Zem), a soft-spoken stranger who is adept at fixing things. We know how Scott and Taylor ended up in their dire predicament, but how exactly did the other survivors wind up in the middle of nowhere?

The storytelling in Collision actually reminded me of a compact, less fantastical version of Lost. Both feature a group of disparate strangers thrown together by a crash, and both use flashbacks to reveal surprisingly dark, tortured secrets about each of the characters. (Well, except for the dastardly Omar; he’s pretty much the scumbag you think he is.) I’m the kind of guy who daydreams about what awesome, minor characters on TV shows — like Tim Gutterson on Justified or Bronn on Game of Thrones — do when they’re not on screen, so I appreciated Marconi delving into these strangers’ interior lives.

Collision features a batch of actors who are interesting to watch, even when the performances are a bit uneven. For example, Grillo’s Scott should be a sympathetic figure. He seems to love his wife and, as far as we can tell, his main crime is being a bit of an overbearing know-it-all and focusing too much on his business. (I mean, it’s annoying that Scott takes a work call in bed, but it’s hardly worth killing the guy.) Grillo gives a performance that fluctuates between sympathetic, cocky and menacing. I’m ok with a protagonist that isn’t easy to root for, but Grillo doesn’t always convincingly connect the dots between Scott’s various emotions. Alexander is asked to play a similarly bipolar character. The actress, always a fetching presence in the Thor movies, is more believable as the sort of femme fatale who can seduce a guy into murder. Meanwhile, Zem has an unforced, captivating presence as the strong, silent Saleh and, as mentioned before, Maaskri is legitimately nasty as Omar.

The problem, ultimately, is Marconi doesn’t seem to trust his own storytelling chops in creating a handful of independently compelling characters. As a result, he strains to connect some of the backstories. Killing off a significant threat with about 30 minutes to go is a gutsy move, but by the time the main players wind up in a crowded marketplace for the film’s deadly climax, you’re likely to be rolling your eyes at the ridiculousness of it all. Thankfully, Marconi — directing his first movie in more than 20 years (1992’s The Harvest) — does some intriguing, show-offy things from a visual perspective and takes full advantage of the film’s exotic locale. Speaking of which…

Collision is presented in an aspect ratio of 2.40:1. The 1080p image is arrived at with an AVC MPEG-4 codec at an average of 20 mpbs. The wholly cinematic aspect ratio gets put to excellent use immediately. The film opens with breathtaking shots of the otherworldly desert landscape. The Blu-ray initially presents the desert crisply with a soft golden hue. Later on — as the situation gets more dire for the characters — the image gets rougher and employs a harsher, slightly higher contrast. There’s not a lot of need for black levels, but an early scene shows nice shadow detail, even if the levels themselves could’ve been a bit deeper. But that’s just nitpicking on what is a clear, sharp, stunning visual presentation.

The DTS-HD Master Audio 5.1 track is predictably aggressive when it comes to cranking out sound effects during action sequences (that impressive crash) and the score (versatile, evocative work by Richard Horowitz), but is much quieter overall than I expected. Early in the film, Scott makes note of how quiet things are in the desert landscape, and the sound field follows suit by giving us only the subtlest hint of ambient wind through the rears. I did expect the frenzied marketplace climax to have a stronger sense of immersion. Dialogue comes through well, however, and the track is nicely balanced.

Interview with writer/director David Marconi: (17:51) The filmmaker states the story is partially based on some of his life experiences and people he knows, which is actually pretty scary. He also talks about filming in Morocco and the idea of the desert as a pressure cooker. Nothing earth-shattering is revealed here, but this interview is still much more interesting than…

Interviews with actors Frank Grillo, Jaimie Alexander, Roschdy Zem, Marie-Josee Croze and Moussa Maaskri: (4:36) …this rushed collection of soundbites. When I clicked on this feature and saw the four-and-a-half-minute running time, I assumed it covered Grillo’s segment and the other interviews would be contained in other chapters. Wrong! All of the actors briefly talk about their duplicitous characters.

I got a strong feeling from the bonus material that Marconi and his cast cooked up elaborate backstories for all of these people; unfortunately, that didn’t fully come through in the finished product.

Instead, Collision is great looking dumb movie with pretty interesting ideas. “Think I’m crazy? Must be the heat.”