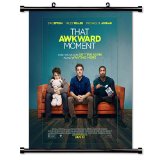 The title refers to the junction in every romantic relationship when a couple has to decide between moving forward and moving on, but That Awkward Moment could also describe the dicey transition between squeaky clean teen star and legitimate adult performer. (Hi, Miley.) To his credit, Zac Efron has already dipped his toe — and other body parts — in provocative waters. (Including Lee Daniels’ The Paperboy Based on the Novel “Push” by Sapphire.) But That Awkward Moment is the star’s first big, commercial, R-rated swing. The real awkwardness happens the moment you realize the movie isn’t nearly as clever or subversive as it seems to think it is.

Fortunately for Efron — and his two on-the-rise co-stars — the film’s talented, likable performers are its major saving grace. Efron stars as Jason, who can charitably be described as a man-whore lothario. When we meet Jason, he’s sitting on a frigid park bench for reasons that will become clearer over the next 90 or so minutes.

The story rewinds a bit with Jason providing smarmy voiceover commentary on his shallow lifestyle during these opening scenes. (Efron drops an F-bomb within the first minute, driving a final nail into the High School Musical coffin.) We also meet Jason’s two college buddies: Mikey (Michael B. Jordan) is a nice-guy doctor who married young and finds out his wife is cheating on him. Daniel (Miles Teller) is a profane, genial chatterbox who works with Jason designing book covers (and refuses to use his own bathroom). To help cheer Mikey up after his breakup, the trio vows to stay single and bed as many women as possible. Naturally, that becomes more complicated when they each find themselves falling into relationships or into old, bad habits.

That Awkward Moment — originally titled Are We Officially Dating? — started life as a script that made the 2010 Hollywood “Black List” of best unproduced screenplays. I don’t know what the original screenplay looked like, but I didn’t see a lot in the finished product worthy of such industry love. The movie was written and directed by Tom Gormican — who also penned the screenplay that landed this project on the Black List — so I don’t imagine anybody messed too much with his original vision. I suppose you can just chalk it up to the follies of a first-time filmmaker.

This is the kind of movie where all the main characters’ relationships go really well or hit the skids at the exact same time. I’m not familiar with Gormican’s background, but he seems to be heavily influenced by the rhythms of TV comedy. Many of the scenes — especially the ones where the trio meets up at a coffee shop/restaurant to discuss their sexual conquests — play out like a male version of Sex and the City. Gormican also employs some overly choreographed, rat-a-tat banter between the guys that feels a little forced.

The director is much more successful when he seemingly takes a step back and lets the performers simply do their thing. Teller, in particular, thrives when he’s seemingly allowed to riff. On the other hand, Jordan has the most thankless role of the three leads as sad-sack Mikey. That Awkward Moment finds its firmest footing during its raunchiest moments. As a result, it usually feels like Jordan’s performance belongs in a less outrageous movie. Jordan doesn’t phone it in, but I’m not sure he’d agree to appear in this movie if it were offered to him today following his Fruitvale Station breakout last year. (Same with Teller in the wake of his terrific work in The Spectacular Now.)

Then there’s Efron, who acquits himself quite well here. The three main actors share space on the movie’s poster, but That Awkward Moment pretty clearly becomes Jason’s story. Efron certainly looks the part of a movie star, and he displays solid comedic timing and charm. (He’s still a little stiff on the more dramatic moments.) He also proves to be remarkably game for the film’s most inspired and uproarious sight gags. One of them involves literal toilet humor with Teller, and the other I can’t fully describe on this site without getting a written warning. (I’ll just say Jason dresses, ahem, inappropriately for a gal pal’s birthday party.) Speaking of the fairer sex, Imogen Poots plays Ellie — the alluring girl who might just inspire Jason to grow up — but I was most impressed by Mackenzie Davis’ Chelsea, the lovely wing girl-turned-love interest for Daniel. They both fare much better than Jessica Lucas as Mikey’s deeply unlikable ex, Vera.

As the movie and the relationships progress, it becomes less and less clear why the guys doggedly stick to their stupid vow. (At least with American Pie, they had prom as a clear deadline to lose their virginity.) The movie had potential, and these actors are good enough to explore the post-college/pre-30’s malaise. But most of the dramatic moments ring a little false, and the movie doesn’t have anything new or interesting to say about modern romance. It’s also a bad sign that the biggest audience pop at my screening came during the end credits, courtesy of a surprise cameo related to one of Jordan‘s earliest roles. “So…where is this going?” That Awkward Moment may not hang around long enough to serve as a viable Valentine’s Day option this year, but it should make for a harmless Redbox watch one day.