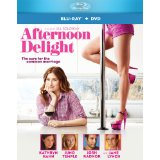 “How did the stripper get in the maid’s room?”

That question sounds like the set up for some juvenile, profane joke, but it also tidily encapsulates the plot of Afternoon Delight. The film is about the plight of an affluent, quietly desperate housewife who takes it upon herself to “rescue” a young, down-on-her-luck stripper. What the quote doesn’t quite capture is how this funny and frank outing from first-time feature filmmaker Jill Soloway is really about the universal quest for intimacy.

Rachel (Kathryn Hahn) has everything she thought she ever wanted. She has an easy rapport with her husband Jeff (Josh Radnor), along with a beautiful boy and an even more beautiful home. (I’m not kidding; one of the special features on this Blu-ray is dedicated to their house.) Unfortunately, Rachel and Josh haven’t had sex in months — the title refers to the time of day Rachel would prefer to have intercourse — and she feels trapped in her upper-middle class prison of demanding moms and school auctions. Before the audience has a chance to whip out the world’s smallest violin, Soloway quickly gives us a scene where a self-aware Rachel tells her self-involved therapist (Jane Lynch) that she realizes women in Darfur, for example, have it much worse.

But the fact that other people have bigger problems doesn’t mean our problems aren’t big to us. In an effort to spice up their sex life, Rachel and Jeff visit a strip club. That’s where they meet McKenna (Juno Temple), who gives Rachel a lap dance and awakens…something inside her. Rachel keeps finding reasons to bump into McKenna and eventually offers her a place to stay. The 97 minute film moves briskly early on, especially when it’s showing us the bond between Rachel and McKenna. Still, having Rachel ask a young sex worker stripper she barely knows to move into her home with her husband and young child seems like a rash, terrible decision. Of course, it eventually turns out as badly as you’d expect.

The reason Afternoon Delight still works is because of its crackling performances and incisive writing. (Soloway picked up an Independent Spirit Award Nomination for Best First Screenplay.) Soloway also directed the movie, and decided to fill it with funny people playing it relatively straight. Hahn — who has been hilarious in everything from Step Brothers to Parks and Recreation — does a tremendous job carrying the film with her unshowy, vanity-free performance. The showstopper is a revelatory, drunk monologue during a Women and Wine gathering that reveals Rachel’s deep-seated insecurity and desperation to connect.

Hahn and Temple also have a special chemistry that alternates between flirty and familial. It’s a tricky, complicated tightrope to walk, but the performers pull it off with aplomb. (Especially if the audience is receptive to the idea that a relationship between two women can be more than one thing.) Temple’s McKenna is more outwardly assured than Rachel, but the actress does a nice job giving us glimpses at how damaged she is on the inside. Radnor is also pretty terrific. At first, it seemed like Jeff just had one gear (funny, detached deadpan), but the actor impressively comes to life during the film’s dramatic climax. The rest of the supporting cast includes comedy pros like Lynch (putting her no-nonsense screen persona to good use), Jessica St. Clair (as Rachel’s curious, most supportive friend Stephanie) and Michaela Watkins (as Rachel’s most vapid fellow mom Jennie).

Almost all of Soloway’s work has been on the small screen, including stints as a writer/producer on Six Feet Under and The United States of Tara. So I was pleasantly surprised by what a thoroughly cinematic experience Afternoon Delight turned out to be. Soloway, for example, made Rachel and Jeff’s house feel very big. More importantly, she often framed Rachel in a way that made the character feel small and isolated in her surroundings. (Kudos to cinematographer Jim Frohna.) We also didn’t need the movie to open with a scene of Rachel restlessly going through a car wash to know her life was stuck in neutral, but it was a nice thematic cue anyway. Soloway isn’t above employing some cool tracking shots or having the camera simply float alongside the action, which adds to the film’s naturalistic vibe. (Soloway also picked up a Best Director prize at Sundance last year.)

Pretty much everyone you see in romantic comedies/dramas — even the good ones — is running around trying to attain sex or some elusive idea of romantic love. Afternoon Delight nods to both of those things, but it goes a step further by exploring how they’re part of a larger desire to connect.

Afternoon Delight is presented in an aspect ratio of 1.85:1. The 1080p image is arrived at with an AVC MPEG-4 codec at an average of 27 mbps. Like I mentioned before, Soloway took a naturalistic approach in making her first feature film, and that’s reflected in the Blu-ray’s visual presentation. As a result, there’s some nice shadow definition on display during certain indoor scenes with purposely low light. Some outdoor medium shots look a little softer than you might expect, but that’s only when you compare them to some of the hyper-sharp close-ups we get of water drops on a windshield or Juno Temple’s glittery backside. Again, there’s a lot more going on here from a visual standpoint than you’d expect from a low-budget dramedy. (I particularly enjoyed how the image seemed to get woozier as the Women and Wine scene progressed.)

The DTS-HD Master Audio 5.1 track is, not surprisingly, mostly here to serve the dialogue, which it does quite well. There’s nice separation during some instances of overlapping chatter. Hahn and Co. mumble some of their lines, so don’t feel bad if you feel you missed something. Even the subtitles just went with “(mumbles)” a few times because they couldn’t figure out what was being said. The rest of the track, however, is pretty standard. The surround speakers are mostly quiet throughout, unless the track is pumping out one of the tunes on the film’s hip soundtrack.

Audio Commentary with writer/director Jill Soloway and actress Kathryn Hahn: Soloway and Hahn don’t take themselves too seriously in this pleasing chat. Besides doling out amusing production tidbits and anecdotes (the opening car wash sequence was the result of a re-shoot), this commentary track reveals how personal this film was to Holoway. You get the sense Hahn/Rachel was really a stand-in for the filmmaker.

Making Afternoon Delight: (9:17) The cast and crew chat about the film’s themes and generally say very nice things about one another. It sounds paint-by-numbers, but I actually really enjoyed listening to them articulate the movie’s message about balancing the desire for familiarity and newness in a marriage, as well as the journey women take from being girls to becoming sexual beings, mothers and wives. (And how those things don’t have to be cancel one another out.)

The Gustavo House: (1:47) Architect Gustavo Gubel gives us a quick peek at the gorgeous design behind the “warm” and “modern” home used in the film.

Please don’t be fooled by the out-there premise of Afternoon Delight or its goofy Blu-ray cover art. This is a smart, sexy, coming-of-middle-age drama that happens to star a woman for a change. (Of course, it didn’t even sniff a wide release because it didn’t look more like this.) If you’re in the mood for a grown-up romantic dramedy, give this one a look.