Adventurer: Curse of the Midas Box

Posted in: No Huddle by Brent Lorentson on February 11th, 2014 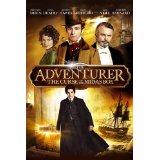 Upon first glance, The Adventurer: Curse of the Midas Box looks like nothing more than a straight to video mash-up of Sherlock Holmes, Harry Potter, and numerous other young-adult adventure films.  The first impression would be correct, but what is surprising is simply how much fun this film is, and it was made for a quarter of what those block busters had.  It’s a treasure hunt filled with legends of mythical beasts and a location filled with a labyrinth of secret passages.  The film simply is the kind of movie that fits in snugly with the adventure films I grew up with throughout the 80s and early 90s.

The adventure sets off as Mariah Mundi (Aneurin Barnard) encounters Charity (Michael Sheen) who he encounters in a museum and has been severely injured.  After meeting with the young boy’s parents as they tend to his wounds, Charity hands the mother an amulet that he believes people will stop at nothing to obtain.  As the children are sent home, the adventure only begins for the Mundi kids as a pair of men break into their home causing the children to go on the run.  It’s while on the run the children discover that their mother has handed them the amulet, each with a half, which is why the children are being pursued by a pair of hired thugs.

It’s when the younger brother, Felix (Xavier Atkins) gets captured and taken away that Mariah narrowly escapes captivity himself through the aide of Charity.  It’s with Charity that the truth surfaces about his parents and their involvement with a secret department known as the Bureau of Antiquities, a group that protects treasured artifacts.  The person responsible for Felix’s capture as well as his parent’s disappearance is Otto Luger (Sam Neill), a renowned treasure hunter who is cunning and ruthless.  Lugar is after the Midas Box, a box believed to have the power to transform anything placed inside into gold.  Charity can only offer Mariah passage to The Prince Regent, a hotel where they believe Luger is hiding and trying to uncover the box.

Once at the hotel things slow down as Mariah goes undercover as a porter. Using his position at the hotel, he begins to uncover many of the hotels deep, dark secrets.  Joining Mariah in his search is Sacha (Mella Carron) and a mysterious magician The Great Bizzmillar.  As the friendship develops between Mariah and Sacha,in other cases can feel like tacked-on drama to appeal to the younger females, but Carron actually holds her own in the film and gives us a character worth caring about.

My major gripe with the film revolves around the mysterious beast on the island that is responsible for the disappearance of many children.  The beast is simply not utilized enough; what could have been a great threat in the background simply results in an afterthought with a very disappointing resolution. I don’t want to get into spoiler territory, but the payoffs in the film are simply its biggest weakness, although by no means would I say results in a bad film.

The pace of the film keeps the film from dragging, and considering the running time is under 100 minutes it’s a good thing the writers managed to cram in enough exposition and tell this story without feeling rushed or bogged down.  This is a film that actually delivers a fun adventure despite its moments of silliness.  For a parent looking for something fun to show their kids that they haven’t seen dozens of times already, this is something all young adventure fans can enjoy.

Though this wasn’t a box office smash, the end does allude to further adventures to follow, and in my opinion that would be a great thing.

Brent Lorentson is a horror writer and film critic based out of Tampa, Florida. With a BA in Digital Film, he co-wrote and co-directed Scavenger Hunt. His short stories have appeared in various horror anthologies. In 2019 his short script Fertile Blood will be a part of the anthology horror film Slumber Party. He is currently working on his first novel A Dark and Secret Place set to be released in late 2019. Favorite Films: Taxi Driver, Fight Club, I Saw the Devil, The Wild Bunch, Dawn of the Dead, A Clockwork Orange, Pulp Fiction, Heathers, The Monster Squad, and High Fidelity.
Mike Tyson: Undisputed Truth The Jungle Book (Diamond Edition) (Blu-ray)