Posted in: Disc Reviews by Gino Sassani on February 11th, 2014 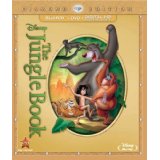 There are two very distinctive schools of thought about Walt Disney’s The Jungle Book. There are the Kipling fanatics who have never forgiven Disney for taking a story considered sacred in literary circles and creating something that honestly bears (pardon the pun) little resemblance to the original work. These folks rightfully point out that the story contains almost nothing recognizable about the story and characters from Kipling’s beloved classic. I have often condemned projects that take names like The Night Stalker and Battlestar Galactica and create a vision incompatible with the traditions I associate with them. Therefore this review might seem a bit hypocritical when I tell you I side with the other camp that considers this film to be a milestone, not only in Disney animation, but in animation history itself. The characters might be distantly removed remote ancestors to Kipling’s creatures, but they are truly classic creations in their own right. What better definition of a classic can there be than the influence that The Jungle Book still has 40 years later, not only on our pop culture but on the careers and lives of today’s artists. I venture to say that more people are familiar with Disney’s renderings of these characters than Kipling’s; I agree the caparison isn’t exactly fair, but it is accurate.

So why do I think this isn’t the same as the “reimaginings” I’ve condemned in these very pages?  I begin by pointing out that we’re talking about a film that has stood the test of time, perhaps enduring beyond its own roots. The second is the fact that this version is not the same medium as its original. When ABC aired The Night Stalker, it was reinventing its original in the same medium, that of a television series. Disney’s The Jungle Book is an animated film whose audience is nothing like that intended for the stories. This distinction was not lost on Walt Disney himself, who lost a close friend and colleague over his decision to create this vision of The Jungle Book. Long-time “go to” man Bill Peet had originally developed the Kipling story for Disney. He kept quite close to the source material and submitted storyboards that told a decidedly darker story with far more dire consequences and darker characters. The impasse led to his leaving Disney Studios forever. As Peter Jackson discovered, film is a far different presentation than the written word, and what works for one does not often translate verbatim to the other. Ask anyone who’s ever tried to develop a Stephen King novel. Walt Disney was attempting to deliver a children’s film that the whole family could enjoy. He rightly deduced that the compelling tale Kipling intended simply wouldn’t translate into the kind of adventure Disney fans were already expecting by 1966. Instead, Disney ordered his staff to avoid reading Kipling and concentrate on delivering characters that the entire family could enjoy. The result is, simply put, unforgettable.

To appreciate The Jungle Book, you first have to look at the animation itself. As many of this set’s features will point out, Disney and his talented staff were far ahead of the curve in the images they were creating. Even though the characters are improbably distorted in their features from their photorealistic counterparts, the animators infused genuine life into them through fluid movements and deceptive eye tricks that convinced your brain these characters had weight to them as they moved. Simple lines represented muscle tensions and skin creases with enough detail to compensate for the fantastic element of the characters themselves. It is no wonder so many animators consider this film to be a turning point in their lives. It would be impossible to talk about these characters and ignore the voices who added a soul to them. What a perfect voice cast it was. Sebastian Cabot as Bagheera the panther is also the film’s storyteller, and who better than Sebastian Cabot who had just told the Winnie The Pooh story. Winnie The Pooh himself, Sterling Halloway, plays Ka, the treacherous python. Perhaps it was Phil Harris who became the identity of the show bringing his own blend of charm and backwoods manners to the critical character of Baloo. Musician Louis Prima has the best musical number as King Louie in “I Wanna Be Like You”. Bruce Reitherman was the son of director Wolfgang and likely landed the part based on his fortunate circumstances, but he is in no way a drag on the film. Walt had a way of matching voice talent that completed his grand illusion to perfection.

Critics are usually harshest on the film’s story, and with good reason. The basic idea is pretty thin. In fact the finished project is far closer to Homer’s The Odyssey than to Kipling’s Jungle Book. Kipling tells the story of man’s havoc on the Indian jungles and allows Mowgli to pass frequently between the jungle and his Man Village. The Disney film is solely the story of a journey and the fascinating characters found along the way. Fortunately the animation and characterizations were so well done, or The Jungle Book, left strictly on the strength of its story, would have passed out of our collective memories as fast as Albert W. Goodberg. There was also much conflict among the staff on how the film should end. There is no question that the film’s ultimate ending is its weakest link. I was never satisfied that the film ended smoothly. Like every masterpiece, The Jungle Book has its flaws, but has managed to rise above these imperfections essential to any human endeavor, and it continues to entertain children of all ages through today and most certainly beyond.

The Jungle Book is presented in its original aspect ratio of 1.75:1. The 1080p image is arrived at with an AVC MPEG-4 codec at an average 35 mbps. Disney has done a rather remarkable job in restoring the film to near original release quality. The color is remarkably bright and compares favorably with original color cels I’ve seen of the original film. The various characters revel in the original shades and hues that have been as identifiable as the characters themselves. Contrast is excellent, only adding to the rich look of these 40-year-old images. Black levels are not particularly deep, but they’re not all that relevant either, as the film more often than not plays out in brighter conditions. There is more than enough shadow detail to maintain the quality during the darker moments of the film.

The DTS-HD Master Audio 7.1 track might just be one of the best remasters of such older material I’ve heard. The songs gain the greatest advantage because they are now spread out over the entire range of speakers, making them sound better than they have ever sounded before. Rear channels bring some of these ditties to new life. There is a crystal clarity here that defies four decades of deterioration. OK, so your sub won’t really get a lot to do; you’ll never even notice, because you’ll be so caught up in the freshness the mix brings to such familiar material. The dialog works great.

A Conversation With Richard M. Sherman, Diane Disney Miller and Floyd Norman: (9:48) The trio share a wonderful intimate moment together. They share charming anecdotes about the film, Walt, and the team that brought the film to life. Sherman sits by a piano, and we’re treated to a couple of measures from the film. The piece also has them talking about the sudden passing of Walt just before the film’s final release.

Alternate Ending – Mowgli And The Hunter: (8:45) At one point there was quite a bit more to the story. Mowgli finds his family and runs afoul of a greedy hunter. He also returns to the jungle, bringing fire and putting his friendships in jeopardy. It’s told through narration and recently unearthed storyboards.

Sadly, this would be the final animation film overseen by Walt Disney himself. His passing brought sweeping changes to the animation empire, and an era was closed. If you never saw The Jungle Book as a child, you might not be able to appreciate the charm a child’s first viewing installs deep in your brain. This Blu-ray is a chance to introduce it to your own children. Isn’t it great when you can share moments like that? It’s like watching The Grinch at Christmas time with someone who’s never seen it. But these were days before computers could create anything our mind can conceive, the days when animators used pencil and paper to give life to inanimate objects. To think. They did it with only “the simple bare necessities”.

Gino Sassani is a member of the Southeastern Film Critic's Association (SEFCA). He is a film and television critic based in Tampa, Florida. He's also the Senior Editor here at Upcomingdiscs. Gino started reviewing films in the early 1990's as a segment of his local television show Focus. He's an award-winning recording artist for Omega Records. Gino is currently working on his 8th album Merchants & Mercenaries. Gino took over Upcomingdiscs Dec 1, 2008. He works out of a home theater he calls The Reel World. Favorite films: The Godfather, The Godfather Part II, The Body Snatcher (Val Lewton film with Karloff and Lugosi, not the pod people film), Unforgiven, Gladiator, The Lion King, Jaws, Son Of Frankenstein, The Good, The Bad And The Ugly, and Monsters, Inc.
Adventurer: Curse of the Midas Box Baggage Claim (Blu-ray)