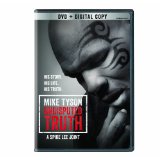 “I know many of you are probably wondering, ‘What the hell is Mike Tyson gonna do up here on stage tonight,’ right? Frankly, I’m wondering the same thing too.”

If you or I decided to get a face tattoo, it would almost definitely be the craziest thing that’s ever happened to either of us. On the other hand, I’m not sure Mike Tyson’s now-infamous facial ink even cracks the Top 5 list of most insane things he’s ever said or done. That very unpredictability is what makes him an ideal, endlessly compelling subject for a one-man show.

The show covers all of Tyson’s greatest hits. (And I’m not just talking about the first-round knockouts that led to him becoming the youngest heavyweight champion of all time, or his famous street fight with Mitch “Blood” Green.) The fighter speaks highly of former mentor Cus D’Amato and Evander Holyfield, the man whose ear he snacked on during a 1997 fight. Conversely, he has far less fond memories of ex-wife Robin Givens (characterized as a harpie and a gold digger) and the “snakes, leeches, and trolls” (led by boxing promoter Don King) who accelerated his financial demise.

Tyson enthusiastically gives us his take on every one of the aforementioned topics and flatly denies being guilty of rape. (He was convicted of the crime in 1992 and served three years in prison.) Unfortunately, the show’s brash, jokey tone feels somewhat off-key here when you consider the severity of the charges, which also included allegations of spousal abuse from Givens. These portions of the film remain impulsively watchable because Tyson appears to have a bottomless well of stranger-than-fiction anecdotes, like the time he almost beat up a pre-superstardom Brad Pitt after spotting him with Givens. This sort of tidbit goes a long way toward livening up these segments, which are familiar to even casual Tyson fans. If these are his “greatest hits,” I wish we would’ve gotten a few more deep tracks.

That’s probably why the most affecting moments in the film come early on, when Tyson talks about his rough upbringing in Brooklyn’s Brownsville neighborhood and dubious parentage. (To this day, he’s still not quite sure who his father was.) Curiously, Tyson doesn’t even try to hide the fondness in his voice when he recounts his violent, criminal exploits. By that same token, I would’ve liked to have heard more stories about his road to sobriety than what was shoehorned into the last 10 minutes of the show.

Tyson isn’t an entertainer in the traditional sense of the word, but he proves to be a natural storyteller and an animated presence on stage. He particularly seemed to enjoy throwing on a hideous wig and impersonating Green. There’s also a moment where he leads a sing-along of Minnie Riperton’s “Loving You” that recalled his most famous musical performance, and a reference to the “West Nine virus” that reminded me of his trip to “Bolivian.”

Kiki Tyson, the boxer’s third wife, is the show’s credited writer and Undisputed Truth occasionally has the star unleashing his memories in a sort of profane poetry. Lee, who previously had a non-fiction hit with The Original Kings of Comedy, pitches in with stylish and dynamic direction. The staging is very spare, but Lee helps bring Tyson’s memories to life with the help of a video screen and well-placed sound effects. The show is basically crazy old Uncle Mike taking us through his photo album.

In fact, the thing that surprised me the most about the show is how warmly the crowd received Tyson. (I suspect that’s also the case during his subsequent national tour.) It’s a more casual and boisterous crowd than you’re used to seeing at Broadway productions, but it doesn’t change the fact that Tyson has done (or has been accused of doing) some objectively horrible things over the course of his life. It goes to show you that a little candor goes a long way. Of course, in Tyson’s case we’re talking about *a lot* of candor. All that’s left now is to try and figure out where “Mike Tyson stars in a hit Broadway show” lands on that list of Tyson-related craziness.