Posted in: No Huddle by Jeremy Butler on February 19th, 2014 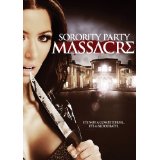 “There is something seriously wrong with this sorority.”

Well, well what would life be without its little mysteries? It was only just yesterday that I found myself watching old episodes of Kevin Sorbo in Hercules: The Legendary Journeys, and now here I am reviewing one of his movies. Coincidence or fate, you tell me? Albeit the man of god-like strength is not the focus of the film, but, of course, with a title like Sorority Party Massacre, I trust you will have no trouble figuring out what takes place in this movie. And if you do have trouble, I would recommend another movie altogether.

In a quiet little town where nothing ever really happens, a big-city cop with a penchant for excessive force is sent to investigate the missing persons case of his boss’s daughter. The girl was supposed to arrive and compete in an annual grant competition for her sorority. After investigating and finding no trace of the girl, the cop becomes suspicious, especially after learning about the staggering number girls that have gone missing over the years. All the missing girls fit the same profile: petite, attractive blondes.

Meanwhile, the annual competition for the Fonskin grant is proving deadly as bodies start to drop. All the bodies belong to the sorority girls competing for the grant. It’s clear someone is willing to do anything to win the grant; the problem is the number of suspects is high and it isn’t limited to the girls competing for the grant: Could it be the dim-witted caretaker, the sheriff, or even the sorority headmistress?

I have to say if it weren’t for the podcast by the film’s very own Marissa Skell, my opinion of the film would have been very different. Thankfully, she was gracious enough to take the time to help illuminate the finer details of the film, including what genre the film belonged in: comedy or horror.

The answer is a little of both. Initially, I had my reservations; Sorority Party Massacre had an intriguing beginning promising a more horror-like film to come, but after that first encounter the film took a turn and displayed more of a comedic touch with the introduction of a detective whose use of “excessive force” gives new meaning to the term. As you can imagine, as the story went on and more funny moments appeared, things became a little confusing for me. The film started to feel more like a parody of horror films rather than a device for instilling terror. So, once again, I would like to thank Marissa Skell for taking the time to speak to us. Your interview allowed me to view the movie as it was intended to be.

So now that I had the proper perspective, I can say the film had its moments, including a comedic reveal of one the characters who didn’t turn out to be who they were claiming to be (I know in a horror film, this idea is a given and can prove confusing, but trust me: when you see it, you will know it.) On the other hand, it seemed the blending of the two genres took away from the horror factor as there were no really scary portions.

It is probably best to characterize the project as a black comedy. The reveal of the killer did add a little more intrigue and took me by surprise. This was mainly due to the fact that I thought I had it figured out. Though I did turn out to be semi-right, the truth turned out to be much more complicated.

Jeremy Butler is a film school graduate of the International Academy of Design and Technology. He is been writing for Upcomingdiscs since 2012; however, movies have played a big part of his life for much longer. Favorite genres include horror, science fiction/fantasy, and comedy. Favorite movies are V for Vendetta, Boondocks Saints, Kiss Kiss Bang Bang, and The Godfather.
Battle of the Damned (Blu-ray) Family Guy: Volume Twelve