Battle of the Damned (Blu-ray) 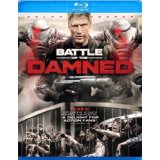 If nothing else, filmmaker Christopher Hatton definitely thought outside the box in his attempt to spice up the lumbering zombie genre. The random appearance of killer robots about halfway through the film is such an out-of-leftfield move — assuming you started watching this movie without looking at its Blu-ray cover (and, no…Dolph Lundgren is *not* one of the robots) — that I actually found it to be inspired. It’s a good thing too because the rest of Battle of the Damned is essentially a low-budget, paint splatter-by-numbers survival flick.

Even the title — Battle of the Damned — feels like a plagiarism of George A. Romero’s “______ of the Dead” template. Budgetary constraints seem to have forced writer/director/producer Hatton to” tell rather than show” early on. Through title cards, we learn Southeast Asia has become a haven for companies looking to avoid regulation. One of those companies is responsible for the release of a deadly virus that has turned the populace into vicious, brain-dead monsters.

The film stars Lundgren as Max Gatling (phenomenal name, by the way), a private soldier hired by a shady, wealthy industrialist to break into an infected city and extract his daughter Jude (Melanie Zanetti). Jude has fallen in with a ragtag band of survivors that includes nerdy/heroic love interest Reese (Matt Doran) and Duke (David Field), the group’s controlling leader. All Max cares about is completing his mission, while Duke is obsessed with keeping his group together. Certain secrets are revealed and, as a result, the snarling undead  aren’t the only threat the group has to worry about.

As you can see, the story winds up being your standard “Survival Horror 101” material. It’s a shame because I thought the film squandered a neat tweak to the formula. I was intrigued by the idea that, instead of trying to break out of an infected city, Gatling and his men would be forced to fight their way in. (Think Escape from New York: Zombie Edition.) Hatton, however, opens the film with Gatling’s team already running out of bullets and desperate to survive. I can appreciate the director trying to thrust the audience right into the middle of the action, but I feel he completely skipped over the most interesting thing his movie had going for it.

Except, of course, for the robots.

The killing machines march onto the scene with minimal explanation. A little digging reveals their presence isn’t entirely random: the robots seem to have migrated over from Hatton’s 2011 film Robotropolis. (Why should Jay and Silent Bob or John Munch be the only fictional folk allowed to hop from one movie or TV show to another?) The arrival of the talking robots and their stated purpose in the zombie war — “We f— them up” — confirms Hatton has a pretty healthy sense of humor about his own film and the genre as a whole. (There’s even a cheeky discussion of whether the fast-moving infected are technically “zombies.”)

The visual effects for the robots aren’t exactly top-notch, but Hatton does a better job spotlighting them with his camera than he does the rest of the action. Too many of the other set pieces are burdened with frenetic camera work that is either too tight or too shaky in presenting the action. (Or sometimes both.)

As for the movie’s other killing machine, I always refer to this before I launch into any discussion of Dolph Lundgren’s badass bona fides. I’ve had the chance to see two of Lundgren’s more recent straight-to-video action work, and I’m pleased to say he knocks more heads here than he did in either One in the Chamber  or Ambushed. As Max Gatling, Lundgren gets to show a bit of his quippy personality and closely resembles The Punisher, the Marvel character he previously played in 1989. (One of the movie’s more curious credits is “Gatling Costume by Junker Designs.”) He’s still a hulking presence, even if his movements are creakier than they were in his prime.

Meanwhile, Zanetti is a bratty, feisty presence in a junior Michelle Rodriguez sort of way. And Field adds a touch of madness to his proclamations about keeping the group together. As a whole, the cast is serviceable considering the script doesn’t really give anyone — other than the robots — anything interesting to say or do.

Battle of the Damned is presented in a 1.78:1 aspect ratio. The 1080p image is arrived at with an AVC MPEG-4 codec at an average of 25 mbps. Not surprisingly, this is a chilly image with a de-saturated, gunmetal grayish hue to it. It perpetually feels like someone turned the lights down in that “filmed-in-Canada”, Sy-Fy production sort of way. (Battle of the Damned was shot in Malaysia.) Fortunately, the grimness actually works for the material. This is also an exceedingly clean and sharp visual presentation that features impressive detail on every part of the frame during close-ups and medium shots. In fact, I actually think the image may have been a little too clean for its own good; some rough-hewn texture would’ve probably helped sell the apocalyptic setting a little better.

The Dolby TrueHD 5.1 track excels when the action in the film gets ratcheted up. Fortunately, that’s quite often. The rears burst to life with gunfire and the snarling undead, while the robots’ stomping march into the city gives the subs a brief little workout. There’s also a good sense of directionality as bullets fly from the front speakers to the appropriate rears. The bad news is the surround speakers pretty much take a vacation when the characters aren’t running for their lives. Obviously, I wouldn’t expect the sound field to be quite as active during calmer scenes, but I would expect at least some sonic indication that this ruined city is infested with zombies. Overall, it’s a solid track that performs quite well when you’d expect it to, but doesn’t offer much more.

Battling the Damned: (6:40) No talking head interviews here. Instead, we get a behind-the-scenes look at the filming of many of the movie’s stunts. Although I like the side-to-side comparison of the on-set footage to the finished product, this is a thoroughly skippable featurette. Presented in HD

There’s not very much here that’s original, but Battle of the Damned still managed to hold my attention. (It doesn’t hurt that the movie is only 89 minutes long.)