Posted in: No Huddle by Brent Lorentson on February 21st, 2014 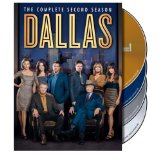 It was during the filming of season 2 that original Dallas star Larry Hagman passed away. Hagman had reprised his iconic role for the new generation version of the smash hit series that ran from 1978-1991. The character of J.R. Ewing — and the iconic question of who shot J.R. — is simply a part of the pop culture vernacular whether you followed the show back then or not.

I came into the second season of Dallas without watching any of the previous episodes and only a vague recollection of the original series from the days I watched the show with my grandparents. Larry Hagman is one thing I do remember though, and seeing him chew up just about every scene he’s in while playing the infamous and ruthless J. R. Ewing is simply a treat.

I have to admit when I first heard about the new series and saw the promo ads, I wasn’t all too impressed. So when I took the season to review, there was the slightest bit of hesitation on my part. Having finished the season now, I have to say this show was a fun watch and exceeded all my expectations. Back stabbing, infidelity, kidnapping, extortion, and murder are what drive every twist and turn of a series where the line between the good and the bad is all but a blurry distinction.

John Ross Ewing (Josh Henderson) and cousin Christopher Ewing (Jesse Metcalfe) continue their bitter family feud as they fight over control of Ewing Industries, as well as the affections of Elena Ramos (Jordana Brewster). Sue Ellen Ewing (Linda Gray) finds herself in the middle of a scandal on the eve of her election, and Ann Ewing (Brenda Strong) discovers the whereabouts of her daughter, who has been missing for over 20 years. That is only the tip of the iceberg as the drama only thickens and the twists get even slicker as greed and power fuels the family to turn on one another.

Christopher is doing all he can to maintain custody of the children he is having with Rebecca (Julie Gonzalo), who turns out to also be the daughter of Ewing archnemisis Cliff Barnes. To add more to Christopher’s plate, he is working on making a deal for the Ewings to step into the methane business understanding that clean fuel is the future. But this is Texas, and swaying locals to move away from oil is easier said than done. John Ross sees the potential money up for grabs, but continues to carry his torch for Elena. So he goes about making deals with his mom Sue Ellen, as well as Rebecca, to help ruin his cousin.

And just where is J.R. in all of this? He’s the man behind the curtain creating schemes that slowly unfold as the season progresses and beyond his passing in the show. Yes, J.R.’s demise is a key point of season 2. Due to Hagman’s death, the writers were able to expand the role up to the seventh episode, but there is plenty more drama that follows. In many ways it’s J.R.’s death that provides the show with some of its best dramatic moments, and it is where we see Uncle Bobby (Patrick Duffy) take the Ewing reins and lead them on their path to discover who is behind J.R.’s murder, as well as defeating Barnes and anyone else who believes they can fight the Ewings and win.

There is so much going on in this show, but it never once feels rushed. Instead, the show has this sharp pace that has me grateful I was able to simply watch the next episode instead of having to wait a week to find out what happens next. Dallas is simply a guilty pleasure that makes the typical family drama feel tame. The ruthlessness of the Ewings is something to be appreciated from the living room couch, and to be thankful you’re not a part of this family despite its fortune.

Brent Lorentson is a horror writer and film critic based out of Tampa, Florida. With a BA in Digital Film, he co-wrote and co-directed Scavenger Hunt. His short stories have appeared in various horror anthologies. In 2019 his short script Fertile Blood will be a part of the anthology horror film Slumber Party. He is currently working on his first novel A Dark and Secret Place set to be released in late 2019. Favorite Films: Taxi Driver, Fight Club, I Saw the Devil, The Wild Bunch, Dawn of the Dead, A Clockwork Orange, Pulp Fiction, Heathers, The Monster Squad, and High Fidelity.
Game of Thrones: The Complete Third Season (Blu-ray) Winter’s Tale