Posted in: The Reel World by Archive Authors on February 23rd, 2014 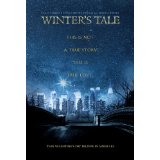 In 1983, a massive 672-page novel by Mark Helprin called Winter’s Tale was published. In 2006, The New York Times Book Review named it one of the 22 best books of the last 25 years. It is an almost universally acclaimed book, and one that is nearly impossible to translate into any one movie because it covers many characters over a long period of time. Screenwriter/Director Akiva Goldsman (A Beautiful Mind, The Da Vinci Code, I Am Legend) has taken on this difficult task. Some of his famous friends have joined him. He has admitted in interviews that he had no choice but to cut many large sections and story lines from the sprawling book. I have no problem with this when someone does their very best to honor and respect what was clearly a great work. I think it is unrealistic to say that a large and complex book can’t be made into a movie. They are different experiences, and if you object, then read the book again and avoid the movie.

Winter’s Tale is being released on Valentine’s Day because it heavily emphasizes the romance inherent in the book. It is a tragic and doomed romance, but one that is laced with magic and a cosmic significance that extends across the cosmos. The movie tells the story of the burglar, Peter Lake (Colin Ferrell) who does not die despite being surrounded by demons disguised as thugs who throw him off the Brooklyn Bridge. He rises from the water 100 years later in modern New York trying to remember his past. The main demon who pursues him is Pearly Soames, played by Russell Crowe (A Beautiful Mind). Soames has magical powers of his own but answers to the Judge or Lucifer played by Will Smith (I Am Legend). Soames has a driving need to destroy miracles and is pursuing Peter Lake because he feels his miracle is near. But both Soames and Lucifer must play by certain rules. Peter Lake has found a white horse to help him which turns out to be angelic being drawn to Peter by his grace. The woman he falls in love with is dying from consumption (Jessica Brown Findlay, Lady Sybil Crawley/Branson from Downton Abbey).

The movie is full of mystical and fantastic situations. It is a fantasy film for adults. It must be said though that the strain of trying to boil the story down to its most essential elements show. Many of the complexities of the book have been trimmed away. There is reason to complain that the movie loses much in the translation. Still, a movie like this would likely never get made any other way. The movie’s focus is on romance, and it delivers a beautiful story, but it’s only a fraction of the story of the book. It still is a worthwhile story and hopefully you will be drawn to read the book.

Many other great actors help make this a better movie including Jennifer Connelly (A Beautiful Mind), William Hurt (Kiss of the Spider Woman) and Eva Marie Saint (North by Northwest).

Akiva Goldsman is primarily a writer with a long resume as such. His work as a director is far more limited. He has directed a few episodes of Fringe of which he was a producer, but Winter’s Tale is his first feature. The film could have used a more authorial and idiosyncratic tone to bring out the strangeness and uniqueness of the material. His style is too prosaic. The book is one of the most adult treatments of fantasy, and the film comes off as “love story light”. I think the themes of myth, religion, collective consciousness and interconnectedness are fascinating. It delves into to so many areas that are mysterious and beyond our understanding.

The cameos of so many great actors are a testament to the material and to Goldsman, but to use one example, the use of Will Smith seems awkward. Something is just a little off about his performance. His clothes and hair style seem anachronistic and out of place for the turn of the 20th Century.

Winter’s Tale is a good attempt in itself, but the real hope is that more people will seek out the book.

In almost every example I can name, the book experience is just different than the film experience but never