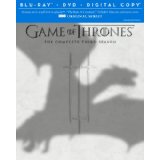 “If you think this has a happy ending, you haven’t been paying attention.”

Even if Game of Thrones had inexplicably wrapped its run after two stellar seasons, the HBO series would’ve gone down as a landmark in television history because of its unprecedented scale and audacious storytelling. But then fans wouldn’t have gotten season 3, an adaptation of (roughly) the first half of “A Storm of Swords”, the third novel in George R.R. Martin’s “A Song of Ice and Fire” series. “A Storm of Swords” is considered the “Empire Strikes Back” of Martin’s novels, which is a terrifying prospect considering the “Empire” in the world of Thrones has been “striking back” since the very first episode.

“I have no doubt the revenge you want will be yours in time — if you have the stomach for it.”

If the bulk of season 2 was about the various would-be kings of the mythical Seven Kingdoms of Westeros and Essos staking their claim to the Iron Throne, then a big part of season 3 showed us what happened after those same wannabe rulers took their swings and missed. Unfortunately, that means the throne is still occupied by “vicious idiot” King Joffrey (Jack Gleeson), who has stubbornly refused to mature in his role as ruler. (Joffrey is horrible 100% of the time, but the character is in rare, despicable form in Ep. 8/“Second Sons.”)

Then again, even the victors from last season’s epic Battle of Blackwater Bay didn’t emerge unscathed. A wounded Tyrion Lannister (Emmy winner Peter Dinklage) fears for his safety. Meanwhile, his sister Cersei (Lena Headey, rocking a chronic bitchface ) remains miserable over her son Joffrey’s increasing horribleness, as well as Joffrey’s beautiful and cunning wife-to-be Margaery Tyrell (an excellent Natalie Dormer), and the continued plight of her captive twin brother Jamie (Nikolaj Coster-Waldau). Coster-Waldau, in particular, deserves a hand for his performance this year and is my personal season 3 MVP.

“I think what you want most of all is to be a hero.”

However, the reason season 3 is a new high-water mark for this spectacular show — and the reason the material earned those Empire Strikes Back comparisons — is because the series truly embraced its dark side. Obviously, watching Game of Thrones has never been a happy-go-lucky experience, but season 3 definitively obliterated any romantic notions of “good prevailing over evil” or “true love conquering all” simply because that is what is supposed to happen in fiction. That’s a recipe for challenging, exciting drama, which Thrones delivers in spades.

The show has famously been shocking its audience since season 1, but this batch of episodes took that penchant to a new level. Most of the 10 episodes end with stunning sequences or shots — which range from romantic to horrifying to triumphant — that would serve as high points for almost any other series. The indisputable standout is Ep. 9/“The Rains of Castemere.” By now, Thrones fans know to expect fireworks during each season’s penultimate episode following season 1’s game-changing “Baelor” and season 2’s momentous “Blackwater.” All I’ll say about “The Rains of Castemere” is that, even with the knowledge that something major would likely be occurring within the hour, the episode still managed to knock me on my backside.

Both the production values and the performances remained top-notch this season. The most notable addition was Marvel’s The Avengers star Diana Rigg, who earned an Emmy nomination for her work as the sharp, comically blunt Lady Oleanna Tyrell. Watching Rigg square off with acting heavyweights like Dinklage and Charles Dance (as imperious Lannister patriarch Tywin) is always a kick. The show’s writers — led by creators David Benioff and D.B. Weiss — seemed to particularly excel this year in creating mesmerizing acting duets for the likes of Dinklage, Heady, Dance, Rigg,  along with bickering likes of Coster-Waldau and Gwendoline Christie’s Brienne and the scheming likes of Aiden Gillen’s Littlefinger and Conleth Hill’s Varys. Benioff and Weiss also stepped up their visual storytelling game with sequences like the wordless “Game of Chairs” in Ep. 3/ “Walk of Punishment.” The other big addition this season was Rome’s  Ciaran Hinds as legendary Wildling leader Mance Rayder, but the character disappears from the story entirely too soon considering the way he was built up.

Of course, this show has been in such good hands so far that I have no doubt Benioff, Weiss and their team have plenty of juicy material in mind for Mance in the future. (Especially when you consider the serious threat emerging from the North.) Speaking of the future, Emilia Clarke’s fierce, charismatic Emmy-nominated performance as “Mother of Dragons” Daenerys Targaryen makes it easy to see why the character continues to grow into a more formidable figure. This is probably a good place to mention there simply aren’t enough Emmy nominations to go around. Otherwise, Michelle Fairley surely would’ve been recognized for her work as Catelyn Stark, who is so protective of her children she didn’t fully realize or care that her attempts to rescue her daughters critically undermined oldest son Robb (Richard Madden). And I could kick myself for not even mentioning the great Maisie Williams during my season 2 review for the way she breathes feisty, mature life into Arya Stark.

But that’s the thing about Game of Thrones: if I’m lucky enough to review the show next year, I guarantee you I’ll be kicking myself for leaving someone out of *this* review. The show has a ridiculously deep roster of rich, fascinating characters. This remarkable Blu-ray set from HBO — like the previous two before it — represents the best possible presentation of those characters and the world they live in.

Game of Thrones: The Complete Third Season is presented in its original aspect ratio of 1.78:1. The 1080p image is arrived at with an AVC MPEG-4 codec at an average of 26 mbps. The budget for season 3 was reportedly $50 million, which is a steal compared to feature films that strive to achieve the same scale, but is a king’s ransom among television series. Thankfully, this Blu-ray makes sure every cent that has been lavishly spent on this show looks fantastic.

Season 3 filmed scenes in Belfast, Morocco, Croatia, Iceland and even the United States. The HD image serves each of the wildly-varied locations equally well. The warm tones and vibrant colors of scenes set in Astapor, Yunkai and King’s Landing are as convincing as the resplendent whites of snow-capped scenes set beyond the Wall. The image also excels at both intimate and large-scale storytelling. When the camera pulls back, the Blu-ray gives us a clear, flawless look at the show’s otherworldly vistas. When the camera pulls in way close, we see and appreciate the amount of painstaking detail that went into each makeup and costume choice. (I was partial to the scaly Tully armor.) In short, the visual presentation of this show is as ambitious — and as good — as it gets.

The best thing I can say about this set’s DTS-HD Master Audio 5.1 track is that it goes a long way toward transporting the viewer to the show’s fantastical realm. Many audio tracks confuse “loud” with “good”, but Game of Thrones features an astoundingly varied and dynamic sound field that immerses us in the Seven Kingdoms. Every sound in this world seems to be accounted for, from ambient noise during each outdoor scene to the flapping of dragon wings. And when it’s time for the track to thunder to life, it does so seemingly without much effort. (You’re going to want to crank up your speakers for the climactic scene in Ep. 4/“And Now His Watch is Ended.”) Dialogue is always crystal clear, and composer Ramin Djawadi’s score remains as majestic as ever. This is a massive TV show about a massive world, and the track captures as much of it as humanly possible.

All of the bonus material is presented in HD. Each of the special features — except for Disc 1’s “A Gathering Storm”, Disc 4’s “The Rains of Castemere” Unveiled, and episode commentaries — can be found on Disc 5.

In-Episode Guide: Certainly the most useful special feature, this pop-up guide allows you to access information about each character and setting while the episode is playing. So if you’re not sure how two characters in a given scene are related to one another or which part of the Seven Kingdoms we’re currently visiting, press the menu button and take a quick peek. Definitely recommended for people who haven’t read the books.

Histories and Lore: A series of 16 animated/motion comic-style videos narrated by in-character cast members that details key battles and family connections in the world of Thrones. None of the segments are longer than five minutes. Does not feature a Play All option.

Roots of Westeros: This interactive guide to the show’s mythical world is an even more comprehensive look at Martin’s creation. It features all the “Histories and Lore” videos, along with profiles of all the show’s key characters/places and how they relate to each other. If you find yourself diving into this, you really should just pick up the books.

A Gathering Storm: (14:01) A handy season 2 recap conveniently placed in Disc 1, just in case you need a refresher before you jump into season 3. Features clips along with cast and crew comments.

The Politics of Marriage: (8:38) This featurette is all about the crucial role marriage plays in the never-ending power plays orchestrated by highborn families like the Lannisters, Tyrells and Starks. If nothing else, the show knows how to throw a wedding.

Inside the Wildlings: (6:21) A look at the tough, uncivilized Wildlings, who make their home North of the Wall. Martin notes the people who comprise the ragtag Wildlings are more varied than their more regimented counterparts to the South. They’re also completely unconcerned with line of succession, which means any capable, charismatic leader could conceivable ascend to their throne.

Audio Commentaries: There are a total of 12 commentary tracks. Every episode except the season premiere features at least one commentary, with Ep. 3/“Walk of Punishment”, Ep. 6/ “The Climb”, and Ep. 9/“The Rains of Castemere” getting two tracks. Among the participants are Martin, Benioff and Weiss, directors, writers and cast members including Clarke, Headey, Coster-Waldau and Kit Harrington, who plays dreamy bastard Jon Snow.

These are almost always fantastic. The production details on such a massive show are fascinating, and the actors genuinely seem to enjoy each other. (Three of the younger Stark kids unsuccessfully attempt to beat box the show’s theme song.) Check these out if you want to find out how they worked around Harrington’s ankle injury, and which performers used nude body double. Most importantly, this is your chance to confirm that Gleeson actually seems really cool and totally un-Joffrey-like in real life.

New Characters: (9:41) Weiss points out the show is “still casting more than killing”, so this roll call of fresh additions is useful. This includes brief profiles of Lady Oleanna, Missandei, Mance Rayder, Tormund Giantsbane, Orell, Jojen & Meera Reed, Blackfish Tully, Edmure Tully, Thoros of Myr, and Beric Dandarrion. What if I told you I totally made up one of the names on that list? Good luck spotting the fake. (And don’t use Google, cheater!)

Deleted/Extended Scenes: (14:28) A rare treat! The season 2 set featured deleted scenes as hidden easter dragon eggs, but now they’re out in the open. It’s only five scenes and they’re mostly extended versions of existing material. But this batch is worthwhile just for the terrific scene where we see Dance’s Tywin Lannister fishing and briefly enjoying some leisure time. Of course, he’s almost immediately interrupted and irritated by an unwelcome visitor.

This is the Game of Thrones season everyone was waiting for. And I’m not just talking about fans of Martin’s novels: the bonus material makes it very clear Benioff and Weiss desperately wanted to bring some of the moments featured in these episodes to life.