Posted in: No Huddle by Brent Lorentson on February 23rd, 2014 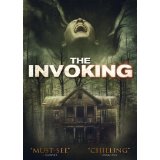 Good news, you just inherited a home from a family you never even knew you had; unfortunately, once arriving onto the property you start to lose your sanity.  That is basically The Invoking in a very crude nutshell.  The cover may elicit hopes for a more hard-edged haunted house film or a film revolving around some unseen evil in the woods, but this is not the case. Writer, cinematographer, and director Jeremy Berg sets off on his first- time feature film and delivers a film that underwhelms but does have its merits.

Samantha (Trin Miller) takes three of her friends out into the wilderness to see the home and property she has inherited.  Along for the ride is her ex-boyfriend Mark (Brandon Anthony), Caitlin (Andi Norris) and Roman (Josh Truax).  This is one of those pairings that I feel really only works in the movies, but in real life this group would simply be at one another’s throats the entire time.  After all, Roman seems to be in love with his best friend who is planning on traveling for six months and continues to flirt with Mark despite her best friend’s feelings.  As for Mark, there still seems to be tension between Samantha and him, so of course what better way for this drama to play out than a trip to a house in the middle of nowhere.

Waiting for them at the home is Eric (D’Angelo Midili) who is a war vet who has a friendly yet creepy way about him.  As if the awkward tension wasn’t enough between the four, the group decides to have the caretaker hang around with them.  Eric fondly talks about his memories of Samantha from the past, her being the girl that pretty much kept him sane considering all the trauma the two grew up with together.  Unfortunately Samantha doesn’t remember much of anything from her past, only that she was adopted when she was younger.

As night falls, Samantha is haunted by her dreams, vague recollections revolving around her ex and her family.  As her stay progresses at the new property her dreams turn to hallucinations of her friends, but Samantha can’t quite get a handle on all it is supposed to mean.  Eric hints at things from her past and the trauma she survived, but it’s only enough to tease her and frustrate her.  Trouble is, this is frustrating for the viewer as well.  I can appreciate what Berg was attempting, but it just didn’t quite work.  After all, couldn’t this mystery with her parents and the home be wrapped up with a simple Google search?

The performances are what I found the most off-putting.  Though the characters are distinct from one another, there is no arc for anyone throughout this film.  For a film about a woman discovering the truth about her past, we never actually see a change, and that has me frustrated the most with the film.

On the technical side of the film things look pretty good for a first-time feature, though there was one scene in a bedroom where we can see the camera adjusting its framing; it wouldn’t be so bad if when the shot came back from the cutaway the camera is still ever so carefully being nudged.  With the exception of this scene (normally I wouldn’t harp, but it was distracting) the rest of the film looks nice for the budget they had to work with.  Keeping things simple with the dreams/hallucinations was the right way to go, though I have a hard time classifying this as horror film.  Over all, though, for a micro-budget film, Berg and his team accomplished more than most filmmakers with ten times the budget.  This isn’t a film people will remember, but I hope this is a film Berg can grow from, and I look forward to seeing what’s next from him.

Brent Lorentson is a horror writer and film critic based out of Tampa, Florida. With a BA in Digital Film, he co-wrote and co-directed Scavenger Hunt. His short stories have appeared in various horror anthologies. In 2019 his short script Fertile Blood will be a part of the anthology horror film Slumber Party. He is currently working on his first novel A Dark and Secret Place set to be released in late 2019. Favorite Films: Taxi Driver, Fight Club, I Saw the Devil, The Wild Bunch, Dawn of the Dead, A Clockwork Orange, Pulp Fiction, Heathers, The Monster Squad, and High Fidelity.
Winter’s Tale Burn Notice: Season Seven