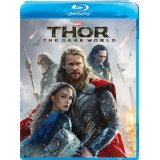 “There is nothing more relaxing than knowing that the world is crazier than you are.”

When Disney Studios bought the Marvel line, what they were buying was really a printing press that printed freshly-minted money. That doesn’t mean it was automatic, however. It was done right. Starting with the first two Iron Man films, the franchise that would lead to Joss Whedon’s superior Avengers film was one of creating a universe. God made the universe in seven days. It took Marvel five movies. What we end up with is not just a fine collection of treats for the geeks and fanboys. We’re left with an entire world, a world that we are all invited at about the pace of two films a year to come and play within. No one is pretending that they’re making serious cinema here. What they’re doing is making serious cash. To do that, there is only one order of the day. Thou shalt entertain. After two hours visiting with Thor: The Dark World — I’m entertained.

As the film begins, we find that Odin (Hopkins), the All-Father, has sent Thor (Hemsworth) and his merry band of warriors to settle some skirmishes in the nine worlds. Translation: kick some serious bad guy butt and come back for the celebratory feasts. Meanwhile, Loki (Hiddleston) has been sent to the deepest dungeons of Asgard for the sins he committed during The Avengers. It’s all going pretty swimmingly until Malekith (Eccleston) attempts to regain some powerful stuff called the Aether. It’s a swirly red mist that contains great power. The prologue informs us the last time he was beaten Odin buried the stuff in the deep caverns of the Dark World so that no one can find it. Obviously, that wasn’t going to work out too well.

Enter Jane Foster (Portman) who is a bit pissed that Thor hasn’t come calling. She’s been playing with technical gizmos to try to track him down. She still has intern Darcy (Dennings) who now has scored an intern of her own. Meanwhile Erik (Skarsgard) has gone a bit off the deep end and gets himself arrested while dancing about Stonehenge naked. Apparently he’s on to something, and Jane’s search leads her to a portal that takes her, where? Of course, to the Dark World where she encounters what? The Aether. It bonds to her, and now Malekith is after her to get it back.

That’s where Thor returns and whisks her up to Asgard. Malekith follows with a fleet of cloaking device-enabled ships that rip the place up a bit. Thor wants to take the Jane to the Dark World, bait Malekith, and (hopefully) destroy the Aether in the process. Odin forbids it. If you’ve seen the first film, you already know that Thor’s going anyway. However, he needs a little help. His buddies Sif (Alexander), Fandral (Levi) and Volstagg (Stevenson) aren’t going to be enough. In fact, they merely serve as helpers in his escape. It’s Loki who holds the key, so Thor breaks him out to help. There’s the expected “if you betray me, I’ll kill you” moment from him and each of the helpers, and it’s off to save the universe. If Malekith gets the stuff and then stands at a certain point in Greenwich he’ll be, like, really powerful. It’s the convergence of the Nine Realms and end-of-the-universe stuff again.

It sounds far more complicated than it really is. The movie is the expected rollercoaster ride from one battle or situation to the next. The result is a special effects extravaganza that washes across several worlds with plenty of cool-looking bad guys to defeat along the way.

The movie tends to channel several other franchises along the way. Many of the alien vistas remind us of something out of Middle Earth. In fact, the elves look quite a bit like Tolkien creations. It doesn’t stop there. The musical resembles Howard Shore’s remarkable compositions more than a little bit. There are also a few Star Wars flashbacks to be found. The Elves’ ships make movements and sounds that are plucked straight out of a George Lucas/John Dykstra dream. There are times the sound design so mimics the Star Wars ships that I actually found it a tad distracting. Someone is putting together their Star Wars Episode VII demo reel, methinks. They even manage to update an old Three Stooges routine. You see, these portals are everywhere and somehow (never really explained) Jane and Erik have learned to control them with a RC car controller. As the fight rages on we see characters (and body parts, for that matter) enter from one place to be teleported another. Often they’d pass each other at different entrances. Remember the old routine where the boys are chased and there are a lot of doors? Characters would go in one to pop out, seemingly at random, another. It’s fun the first 423,987,909 times they do it. It gets more than a little old after that.

Thor: The Dark World is far less Shakespearian than the first film was. Much of that can be attributed to the absence of Kenneth Branagh in the director’s chair. Alan Taylor gives us much more of a straight action film with far more humor. One of the best gags involves a cameo by Chris Evans.

Of course, it’s safe to say that (once again) Tom Hiddleston steals every scene he’s in as Loki. Interestingly, Hiddleston originally auditioned for the role of Thor himself. The casting gods were indeed looking down upon us when the roles went to their current players. Hemsworth has certainly brought more personality than I originally thought possible to Thor. But it appears to always be Loki who makes for the best material. More importantly, the two have developed golden chemistry together, and I found myself feeling that their time together was too brief. I think I could watch these two guys together for two hours. It’s not surprising that there has been pressure on Marvel/Disney for a Loki film. It’s not going to happen, at least not anytime soon. Marvel has plotted these films for the next several years, and we’ve seen the last of Loki for the immediate future. He will not be in Avengers: Age Of Ultron, and it will be at least 2017 before there’s another Thor film. For now, he’s worth the price of admission to this one. Get ’em while you can.

The set design does differ from the first film as well. Asgard looks far more conventional than the wide shots we caught in Thor. There’s no question that the Tolkien films have influenced the design, and several of the filmmakers have already acknowledged the fact. It hurts continuity somewhat, but I don’t think you’ll really mind. Much of the first film is somewhat ignored here. We don’t get any real background into how the bridge was repaired. It appears it still doesn’t work properly…except when it kind of does.

Other changes include Chuck’s Zachary Levi replacing Josh Dallas as Fandral. Dallas had another commitment, and Levi was originally the first choice for the role but could not do the first film. Unfortunately, he’s made out to look as much like Dallas’s character did that he’s almost unrecognizable. He doesn’t get a ton of screen time anyway. Unfortunately, I was hoping that there’d be more of Sif, Fendral and Volstagg, but they’re out of the picture rather early. Ray Stevenson gets the best sendoff as he’s overcome by a ton of Asgard soldiers. He looked like Adrian Peterson of the Minnesota Vikings getting mobbed by an 11-man defensive front… and carrying them a good 11 yards. It’s another of those lighter moments that work without taking us out of the film’s rather frantic pace.

The extras include a few deleted scenes, a two-part making of feature, gag reel and sneak peek at the upcoming Captain America film. The best bonus feature is a Marvel One Shot film that carries on the story of Iron Man 3‘s Mandarin character and some blow-back for our actor stealing the name. It’s a nice payoff for fans who were unhappy with the joke character taken from one of Marvel’s better bad guys.

The important thing is that you’ll have a blast. The two hours go by with remarkable speed. There are two end-credit scenes, so stick around. The first introduces an important Marvel character who will play a part in future Marvel films. The second is more for amusement only. So stay late. You might also like to show up early. “I think there’s going to be a line.”

Gino Sassani is a member of the Southeastern Film Critic's Association (SEFCA). He is a film and television critic based in Tampa, Florida. He's also the Senior Editor here at Upcomingdiscs. Gino started reviewing films in the early 1990's as a segment of his local television show Focus. He's an award-winning recording artist for Omega Records. Gino is currently working on his 8th album Merchants & Mercenaries. Gino took over Upcomingdiscs Dec 1, 2008. He works out of a home theater he calls The Reel World. Favorite films: The Godfather, The Godfather Part II, The Body Snatcher (Val Lewton film with Karloff and Lugosi, not the pod people film), Unforgiven, Gladiator, The Lion King, Jaws, Son Of Frankenstein, The Good, The Bad And The Ugly, and Monsters, Inc.
Burn Notice: Season Seven Nebraska (Blu-ray)