Posted in: Disc Reviews by Archive Authors on February 24th, 2014 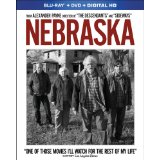 Bruce Dern is the one generating the greatest praise. June Squibb (About Schmidt) who plays Dern’s wife has also gotten multiple nominations. Woody Grant (Dern) is seen at the start of the film walking the winter roads of Billings, Montana. It is his intention to walk to Lincoln, Nebraska. The local police pick him up, and we are introduced to his son, David (Will Forte). The heart and soul of the movie is watching Dern and Forte interact. Forte is best known for acting silly as a cast member on Saturday Night Live, but his performance in this film is perfect. He is dour and forlorn and takes it on himself to be the only family member who tries to care about his father’s feelings. He takes his father on a road trip because he believes he is slowly sinking into dementia. His dad believes he has won a million dollars because he received a magazine subscription sweepstakes letter. Everybody but Woody knows that it’s a scam, but David wants the chance to spend some time with his dad. Woody’s wife Kate (Squibb) thinks they are both insane and doesn’t ever mince words for one minute. The film turns into a reunion with many people from the past and an unexpected journey to forgotten places. David doesn’t know much about his dad, and he will start to learn a lot. They take an extended stop in Woody’s home town of Hawthorne, Nebraska where much of his family still lives. For a time, many people in Hawthorne believe Woody really is rich including his former business partner, Ed Pegram (Stacy Keach). Many members of the family members and friends start to come up with stories about how they lent Woody money over the years.

Through it all David is by his father’s side, tenderly finding ways to support him and make him feel good about himself in what is clearly near the end of his life. The whole film is handled with such finesse and subtle wit, filmed in pristine black and white that beautifully makes nearly every image like a classic photograph. Bob Odenkirk (Breaking Bad) as the other brother, Ross, adds ably to a continuous stream of humorous vignettes.

The film has been marketed as a career capstone for Dern. He has been a great actor for nearly sixty years. He is well-known for playing lunatics and losers but actually comes a very posh and patrician family. One grandfather owns a department store chain. The other was Governor of Utah and Secretary of War under Franklin D. Roosevelt. His godfather was Adlai Stevenson, and his godmother was Eleanor Roosevelt. I could go on. In fact, I should mention that his daughter, Laura Dern, was the star of Alexander Payne’s first film, Citizen Ruth. This brings us back to Payne. It is his brilliance as a director that clearly is the reason this film exists. He takes a simple, sad premise and shines it into a gem. He devotes a laser precision to every scene so that they all have a naturalistic realness yet a gentle absurdity.

Nebraska is presented in its original aspect ratio of 2.35:1. The 1080p image is arrived at with an AVC MPEG-4 codec at a strong average of nearly 40 mbps. The film is in black and white, and it’s a totally appropriate choice for the material. The characters look like faces from those old 1930’s Dust Bowl presentations. The image is quite bright and washed, so there’s not a ton of contrast. All of this is intended and provides a kind of timeless simplicity to the high-definition image presentation that proves that simple can be absolutely stunning even in the world of 4K Ultra Definition. It’s the faces that benefit the most from these style choices. That’s where the detail is often breathtaking. The cast is sharp to begin with, but this image allows them to perform in an aura of authenticity that accents every aspect of the film. Even with the low contrast, black levels to manage to pop on an occasion. There’s a dark hotel room scene that totally flips the brightness to inky black. I know there are those out there with whom a modern black and white film appears something of a waste. If you’re any real kind of a film buff, this is the movie that will change your mind.

The DTS-HD Master Audio 3.0 just couldn’t be simpler. The score is sparse, and when it does reveal itself it is in subtle mellow tones that provide sheer emotion and atmosphere. The magic here is the dialog. Dern has never been better, and the simple sound design puts all of the focus on that characterization.

Making Of Nebraska: (28:50) Cast and crew talk a lot about the powerful performances and this being the first screenplay by Bob Nelson. Casting gets a lot of attention here. Everyone is involved, and you get their perspectives on the characters they play. There’s a passion for these parts that comes across in the film itself. I only wish there had been more here.

Ultimately it is David’s story, because he is the one who has learned all the lessons of his father’s life. It is David’s wisdom and compassion that saves the day. If there is a thread that runs through all of Payne’s films, it is compassion. In every case, we see real people with real human weaknesses, but no matter how great the weaknesses, they are always treated with compassion.