Posted in: No Huddle by Brent Lorentson on February 26th, 2014 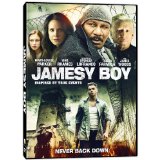 Prison films seem to work as one of the perfect examples of characters in life confronting the crossroads in their lives to either continue down the road they are going and amount to nothing, or seize the opportunity to make a change and make something of themselves.  Most often the character needs to overcome personal demons whether they are emotional or drug-related, but it is still a demon that has dragged them to a dark place in their life, and it’s behind bars where these characters find their redemption.  The Shawshank Redemption is perhaps one of the most popular films that explores this belief of personal salvation from behind bars, and Jamesy Boy appears to followed suit.

The film is based on a true story, and newcomer Spencer Lofranco steps into the lead role of James.  James is the poster child for what a troubled youth is, bouncing in and out of juvenile detention to the point that no public school wants to accept him as a student.  He’s a boy without a future as he continues down this troubled path, but his mom, played by Mary-Louise Parker, struggles to find a school that will take him.  The trouble for James is that the longer he’s out of school the easier it is for trouble to find him, and that’s just what happens when he meets Crystal (Rosa Salazar) who is just as troubled, only she has friends who deal heavily in drugs and numerous other illegal activities.

The film plays on two timelines, one following James before prison, the other how he deals with his life behind bars.  It’s the life behind bars where we see James transition from a rebellious screw-up to a guy maturing and accepting the consequences of his actions.  It’s behind bars where James confronts two men who help guide him on this path of redemption, Lt. Falton (James Woods), a guard, and Conrad (Ving Rhames), a lifer behind bars for murder.  Each man takes his influence and tries to guide James onto the right path, both understanding though that this is a path he has to figure his way through on his own.

With a strong supporting cast, Jamesy Boy elevates its self from being the run of the mill movie of the week and instead is an engrossing drama that had me actually caring about what happens to these characters.  Lofranco is the star here despite the heavy hitters who surround him.  What helps is in large part due to the solid script of writer/director Trevor White and Lane Shadgett.  Dividing the time lines cleverly allowed us to see James go through two transitions, and as we see his evolution in parallel as we see him make crucial life altering choices, the impact hits harder.  I don’t want to get into these decisions since they come in the latter portion of the film, but the decisions are genuine despite whether you agree with them or not; in the end you have to keep in mind James is still only a teen.

Though this is a small production, this is the kind of film I hope finds its audience, because it is a step above the regular limited or straight-to-video release.  As a first feature effort by Trevor White I’m hopeful about what will follow.  As a film about people deserving second chances, this is the kind of positive film I like to see being made that doesn’t play it safe but instead keeps it honest.

Brent Lorentson is a horror writer and film critic based out of Tampa, Florida. With a BA in Digital Film, he co-wrote and co-directed Scavenger Hunt. His short stories have appeared in various horror anthologies. In 2019 his short script Fertile Blood will be a part of the anthology horror film Slumber Party. He is currently working on his first novel A Dark and Secret Place set to be released in late 2019. Favorite Films: Taxi Driver, Fight Club, I Saw the Devil, The Wild Bunch, Dawn of the Dead, A Clockwork Orange, Pulp Fiction, Heathers, The Monster Squad, and High Fidelity.
Hellbenders 3D (Blu-ray) Gravity (Blu-ray)